‘Alice Through the Looking Glass’ disappoints as a sequel 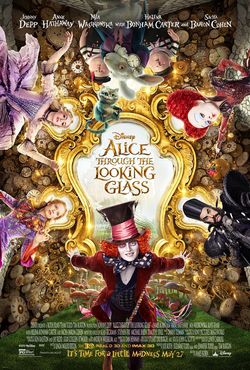 Tea Time: Despite being the sequel to one of the highest grossing films of all time and being a contender for a highest-grossing film of the summer according to many box office gurus, "Looking Glass" bombed at the box office. Making $33 million domestic as of May 30 sounds like nothing to sneeze at, but the film's $170 million budget means the movie is a failure.

Tim Burton’s live-action “Alice in Wonderland” is one of the highest grossing movies of all time and one of only 25 films to gross over $1 billion worldwide.

Though it was not well received, both critics and audiences had generally the same opinions about the film. It was interesting visually but weak in terms of story, character and writing. “Alice Through the Looking Glass,” its sequel, is more of the same, though markedly less impressive.

Alice Kingsleigh (Mia Wasikowska) has been exploring the world in her deceased father’s ship, Wonder. After sailing back from China, she is sought out by her father’s company, which is responsible for funding her grand adventures. Under new management, the company demands she hand over her ship or they will evict her mother. Subsequently, she is led through a mirror to Wonderland by Absolem (Alan Rickman) where she is told by the White Queen (Anne Hathaway) that the Mad Hatter (Johnny Depp) has been incredibly depressed. To cure him, she must go on a time-traveling adventure to find his long lost family.

The only thing that “Looking Glass” has going for it are its visuals, but even those are average. They were impressive in 2010 when Burton’s original came out, but now the CGI environments are drab and look cartoonishly fake, making the characters seem disconnected from their environment.

The acting is also poor, a particularly weak performance by Hathaway. The blame can’t fall entirely on her, though, as this seems a matter of bad direction more than anything. I can only assume that this is because of the film’s complete lack of focus and absence of directorial voice from Burton. There are five uninteresting storylines that make up the plot, and they jump back and forth haphazardly.

Alice is a bore, and while the Hatter is fun, he barely appears in the film. Cohen once again steps into the shoes of a lovable oaf with a terrible attempt at an accent when he plays Time. While the film’s marketing focused heavily on the Cheshire Cat, he had a disappointing lack of screen time, maybe 10 minutes at the most. This goes the same for fans of the March Hare, the White Rabbit and the Red Queen. The franchise ignored beloved characters and opted for poorly written backstories of less likable characters.

All this mixed with time traveling rules that make zero sense, the unappealing Tweedledum and Tweedledee animations and a final act that tries way too hard to tie everything together makes for a boring, poorly made sequel that nobody will care about.