‘Me Before You’ treads clumsily on sensitive subjects 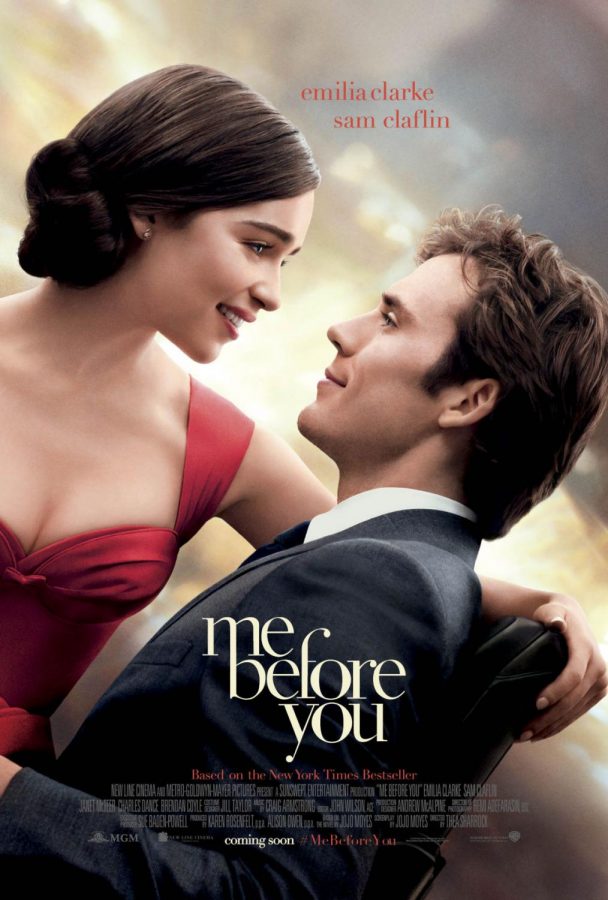 Tweet-hearts: The hashtag #LiveBoldly is being used in marketing for "Me Before You" in reference to Louisa pursuing university after Will's death. However, critics and protestors from the disabled community who found it offensive have been using #MeBeforeEuthanasia in response to the film's mixed message about a disabled person's quality of life.

Summer is the season of rom-coms, and seeing as Nicholas Sparks doesn’t have any projects slotted this year, Hollywood has turned to a different author’s work to adapt.

This book-to-movie adaptation of Jojo Moyes’s bestseller “Me Before You” follows Louisa, a sunny young woman with a passion for odd fashion but little ambition. Her parents both out of work, she is the sole breadwinner of her family until she herself is laid off. Desperate for any job, her temp service sets her up as a caregiver and companion for Will, a quadriplegic millionaire with a dour outlook on his life.

Let’s start with the positives. This film has a lot going for it, and that is in no small part due to Emilia Clarke and Sam Claflin, who play Louisa and Will respectively. These two had such outstanding chemistry and individual comedic styles that you would be hard pressed not to fall in love with them to some degree. They added a lot of charm to a script that is at best charmingly cheesy. Most of the quirky jokes and situational comedy is worthy of eye rolls, but Clarke and Claflin deliver it all in such a genuine manner that you’re bound to forgive the writers and crack a grin.

Other notable members of the cast include Charles Dance, who played Tywin Lannister in “Game of Thrones,” Matthew Lewis, who played Neville Longbottom in “Harry Potter,” and Jenna Coleman, who played Clara Oswald in “Dr. Who.” While none of them was outstanding, none of them dragged the movie down either. The cast as a whole worked well and obviously cared about the project.

The costume design, too, was impressive for the sole purpose of how they styled Louisa’s character. She had a taste in funky high heels, bright sweaters and vintage dresses that could have so easily looked tacky together on the big screen, but instead helped to endear herself to me.

The primary negative of the film is its narrative. What has so many people outraged – myself included – is the film’s offensively simple-minded treatment of a disabled character. Will is depicted as a man who was once deliriously happy with his life but is now severely depressed after losing it all because of the accident. Due to his suffering mental health as well as living in nearly constant pain, Will has tried to commit suicide prior to meeting Louisa. All of this on top of the fact that he endured months of grueling physical therapy with minimal improvements make his character’s logic understandable at least.

That portrayal becomes wildly offensive, though, for its lazy discussion of suicide/euthanasia. The film portrays physically handicapped individuals as being a burden on their families and as being unable to find joy or fulfillment in life unless they have a romantic interest to “fix” them. To wit, Will’s mother hires Louisa as Will’s caregiver over a more experienced and qualified candidate because Louisa is pretty and her son might choose to live if he were in love. That entire message makes my skin crawl. What’s more, even though they do fall in love by the final act of the film, Will realizes that love isn’t enough to make his life worthwhile and chooses to pursue euthanasia. After the characters all initially berate him for being “selfish” for wanting to commit suicide to escape his pain (and not one person contradicts this viewpoint, which makes for an unbalanced debate on a highly sensitive topic), they eventually agree that his life isn’t as good as it used to be and allow him to die on his own terms.

The idea that the film spent so long making us sympathize for this character, making us like the idea of a disabled lead character, and then to kill him off as weirdly and offensively as that without a balanced discussion leading up to it is just disgusting. Plenty of members of the disabled community are able to lead happy lives, but this film was preoccupied with portraying handicapped individuals as tragedies in themselves. To rub salt in the wound, Louisa uses Will’s death (and the money he leaves her in his will) as inspiration to reinvent herself and we’re expected to find this sweet and life-affirming.

“Me Before You” is a well-intentioned rom-com that had no business touching on subjects it obviously doesn’t understand or appreciate. This film was funny, heartfelt, well-acted and nicely paced, but both it and its source material should be ashamed of themselves for their portrayal and commentary on the disabled community. A physically handicapped individual is a person, not a romanticized metaphor.