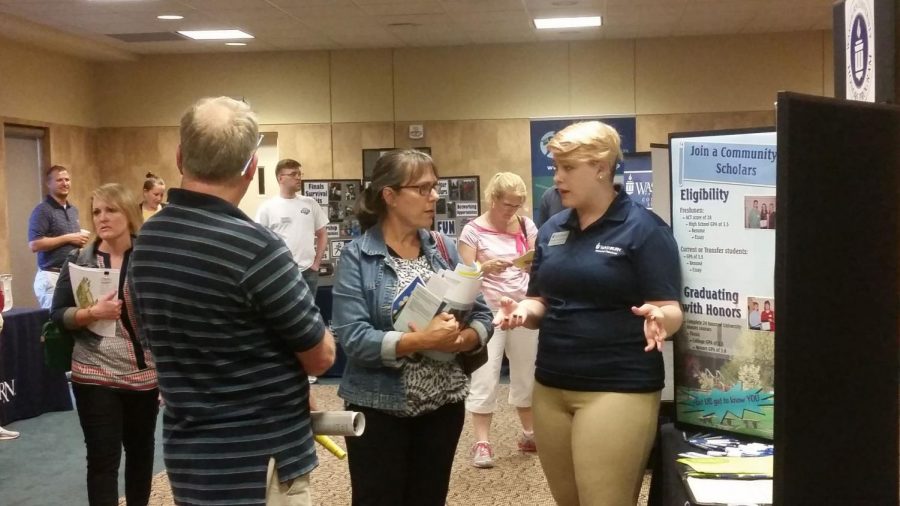 Kimmy Woodworth presents the perks of joining the Washburn Honors Program to parents of a potential incoming student. The outline of the requirements and virtues of the program can help students figure out if they wish to partake in it.

For many incoming freshmen, their journey at Washburn started May 26 in the Washburn Room during new student orientation during which an organization fair was held at 3:30 p.m.

The new student orientation was an event in which incoming students could get to know other students pursuing their academic interest. It also allowed them to learn about the opportunities that Washburn University has to offer.

“The city and the university offer many opportunities,” Zlotky said. “For example, students can take the bus for free in Topeka.”

New student orientation is focused on easing incoming students into college life. The summer orientation counselors, or SOCs, guided the new students through their experience.

Peter Latendresse, a junior studying nursing, was a SOC at the event.

“I just enjoy knowing that I am being instrumental to their success,” Latendresse said.

The booths at orientation were operated by student-driven organizations and departments as well. Tina Williams, an advocate for the Study Abroad Program, was present.

“Any student can study abroad, and we have many countries that they can travel to,” Williams said.

Students who stopped by to talk to Williams learned that if they paid tuition to Washburn and were accepted for a scholarship, then they only had to pay room and board at a different country. That meant that it could be cheaper to go to school, if it had a lower cost of living than at Washburn.

Anna-Marie Lauppe, a freshman studying psychology, said, “The most interesting thing I learned about was Safe Ride. I’d never heard of such a thing.”

Safe Ride is like Uber or Lyft. It is a program offered for free through the university to give students a safe way to get home if they are unable to safely drive themselves.

“I’m excited to go to Washburn because I enjoy academics and learning in general,” Lauppe said.