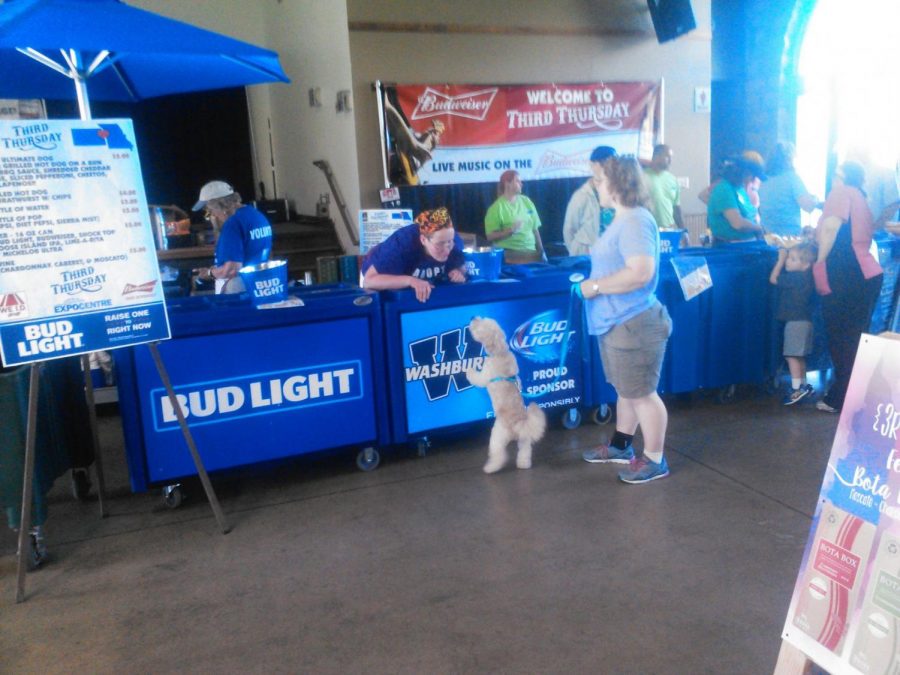 A small dog steps up to greet a woman at a booth at Third Thursday.

June 16, the third Thursday of the month, brought about a fundraising event hosted at Heritage Hall. It was hot and sticky, but there was a good turnout for the event. This Third Thursday was dedicated to the Helping Hands Humane Society.

It was a dog-friendly event. The event was free admission, and it was partially indoors.

Dogs were able to get free treats and water. People could watch Tyler Gregory perform country music in the gazebo. Inside Heritage Hall, there were hotdogs, soda and wine for sale. There was also Max’s Ultimate Hotdog, which was a hotdog with barbeque, crunchy cheetos, jalapenos and cheese.

“Jeff Chabon, the manager of the Expocenter created this event, because he wanted to spread awareness for the community,” said Kay Nail, a member of the Humane Society.

The event was organized by Tori Fuglister. She explained that 10 percent of the proceeds go to the Humane Society. Fuglister has also coordinated three other Third Thursdays. July’s event will center around sheltered living. August will be host to the Children’s Miracle Network. Then the final Third Thursday in September will be for the Boys and Girls Club of Topeka.

“People forget sometimes that there are animals in need,” said Bobby Steele, a morning show host for 99.3 the Eagle. “The Humane Society feeds hungry strays until they can find them a home.”

The event was sponsored by several different local radio stations. Three of them were having giveaways outside including a giveaway for two free Royals tickets.

Nail, who had more than 1,000 volunteer hours at the Humane Society last year, was excited to see such a turnout. Nail also fosters puppies.

“This helps us show support for animals who need homes,” said Community Officer William Lister. “Most people have had an animal in their life, so I think most people could relate.”

The next Third Thursday event will be held July 21 and it will serve hamburgers.