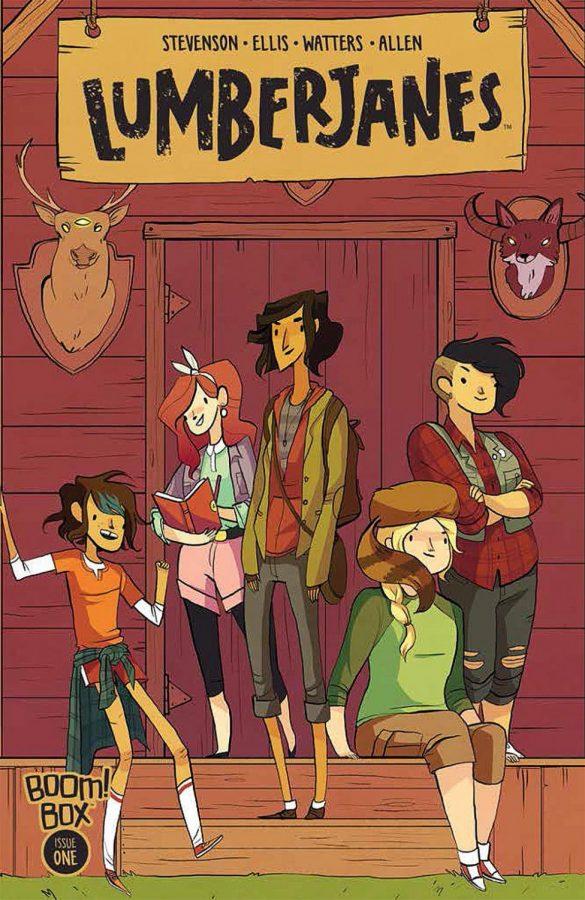 For simplicity’s sake, this review will focus solely on “Lumberjanes”‘s first 12 issues, which make up its three volumes. The series was originally a passion project of a miniseries, and then its publisher Boom! Studios has marveled in numerous interviews that they never foresaw such a cult following to emerge. As such, “Lumberjanes” has been expanded from its planned eight-part storyline into an ongoing series. Boom! Studios is behind other popular comic series such as “Adventure Time,” “Bee and Puppycat” and “Bravest Warriors.”

“Lumberjanes” is such a treat to read. We open in the first issue in the thick of a late night adventure where the girls encounter strange, supernaturally enhanced forest animals while trying to earn a badge. Right off the bat, we know two things about the group: they are hot messes, and they are badasses.

April is the smallest and the loudest of the group, with a love of puns, glitter and winning. Jo is a cool-headed and analytical tomboy within the group, and your go-to when you need help with math or puzzles. Molly is a soft-spoken, athletic archer quick to encourage her friends. Mal, the punk-rocker of the group, loves crafting elaborate plans and traps but often creates more trouble than she solves. Ripley is the youngest and most excitable of the group, with a natural affinity for animals, danger and dumb luck.

These five have the most precious friendship. Their clashing personalities shouldn’t mesh as well as they do, but you can’t ignore the fun, free-flowing banter and palpable love they have for one another. Our cast as a whole is racially diverse, features gay and transgender characters, which takes this series to a whole new level of wonderful and relatable. A great foil to the group is their cabin counselor Jen, a straight-laced and stern older girl who follows the Lumberjanes course manual to the letter.

The identities of the main antagonists of the series are not readily revealed. Some readers will be able to guess before the big reveal if they pick up on the clues as the girls do. What’s so great about this series is that it’s never reliant on just one mystery surrounding the camp. For each one solved, another three pop up like a hydra. That is also the main issue with the series, though. While “Lumberjanes” is meant to last quite a ways into the foreseeable future, the mysteries greatly outnumber the answers readers are given, and that can be frustrating. We need pay-off to keep us intrigued, and while each story arc is fun and fast-paced, it does get tiresome to still be in the dark about certain characters and supernatural elements this far into the game.

Easily my favorite aspect of the series is the way each story is formatted around a badge. Each issue opens with a snippet from the Lumberjanes course manual explaining each badge. Each badge has some sort of pun or pop culture reference in its name, my favorite being If You Got It, Haunt It – a badge for scary story telling.

One element of the series that has been particularly divisive amongst readers is the art style. While our team of four writers each also draws for the comic, they also have nearly a dozen other artists on staff that contribute. Every few issues is drawn by a different artist who brings their own styles and interpretations to the table, and each issue’s official cover art is drawn by Stevenson, but variant covers by the rest of the team are also published as collectibles. While the majority of the readership enjoys the dynamic and diverse array of art styles, some readers critique it for a lack of predictable consistency. I, for one, have enjoyed the art thus far, but do wish the series would pick just two or three main styles to stick with in future issues.

“Lumberjanes” at its core is about friendship, fun and feminism. Our main heroes are incredibly likable in their quirks and flaws, and the editorial team knows how to keep the action and intrigue alive through them. The series could benefit from a more cohesive set of art styles and more narrative payoff, though.