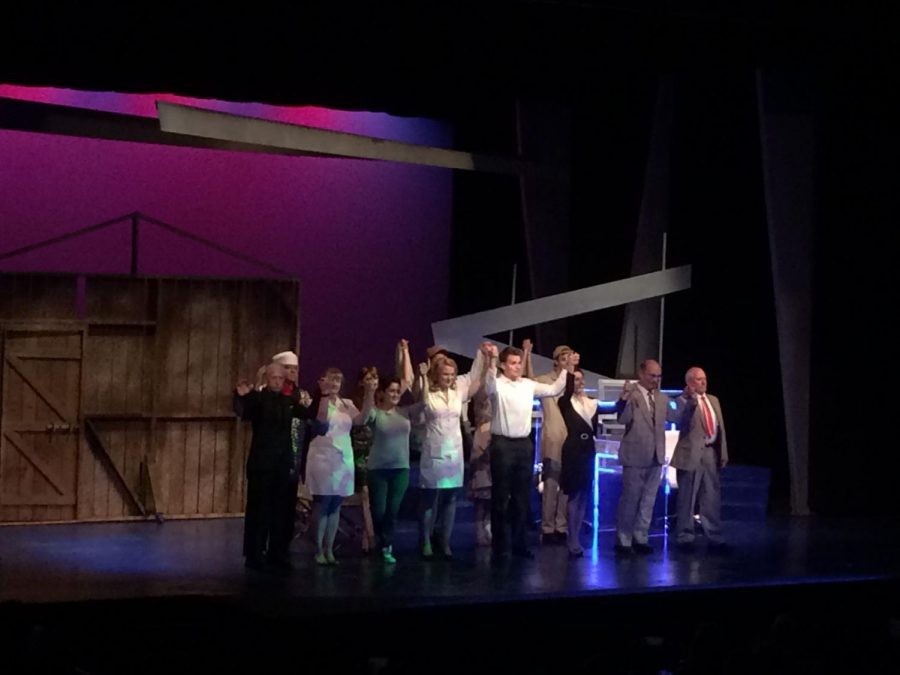 The cast of "Comic Potential" giving their final bows of the night.

The play takes place in what is described as “the not too distant future.” In this “not too distant future”, androids (which are known as “actoids” in the play) have replaced all actors in show business and are constantly being controlled by technical workers sending the movements and lines through a computer system.

Adam Trainsmith (Daniel Kooser), our protagonist, visits a TV station to meet his idol, washed-up Chandler “Chance” Tate (Gary Luke Foiles), a formerly famous director of comedies, who currently makes a living by directing a local TV station soap opera. Upon arrival, Adam feels certain unusual sparks with an actoid named Jacie Triplethree (Laura Mzhickteno), who is the only known actoid who can feel human emotion and operate without computer command. The two quickly, and much to everyone’s disapproval, hit it off and Adam decides to create a show based solely around Jacie’s acting and love of comedy.

The play details their Romeo and Juliet-esque struggles to live their lives together, as well as to receive approval of their comedy show.

“Comic Potential” explores the age-old idea of man falling in love with machine. It uses satire and the ideologies of young, wreckless love to leave the audience to experience a roller coaster of emotions throughout the play.

The first act lacked the kind of unique comedy that the second act truly held. It was a slow-developing play, but once the true plot was present, you couldn’t help but cheer on Adam and Jacie.

With situational and traditional physical comedy, the second act helps prove the point that men don’t have to have all the fun in comedy. Jacie was an extremely well-written and well-executed character that quickly led her to become a crowd favorite. Alternatively, Adam was the underdog, who only wanted a chance to make it big, and you couldn’t help but root him on, but more importantly, root on their beautiful love story, just like you did when you first read Romeo and Juliet or saw West Side Story as an adolescent.

The technical aspects of “Comic Potential” were hit or miss. The sound effects, lighting and music used were strong. And the audience seemed to appreciate the creative and unusual costumes and appearance of Jacie’s character. However, the set left a lot to be desired. For a play that is supposedly set in the future, I expected a bit more of an extravagant set.

“Comic Potential” does well in letting the audience experience young love, wanting to achieve your dreams and receiving constant disapproval for doing so, and how hard it can be to juggle those things.