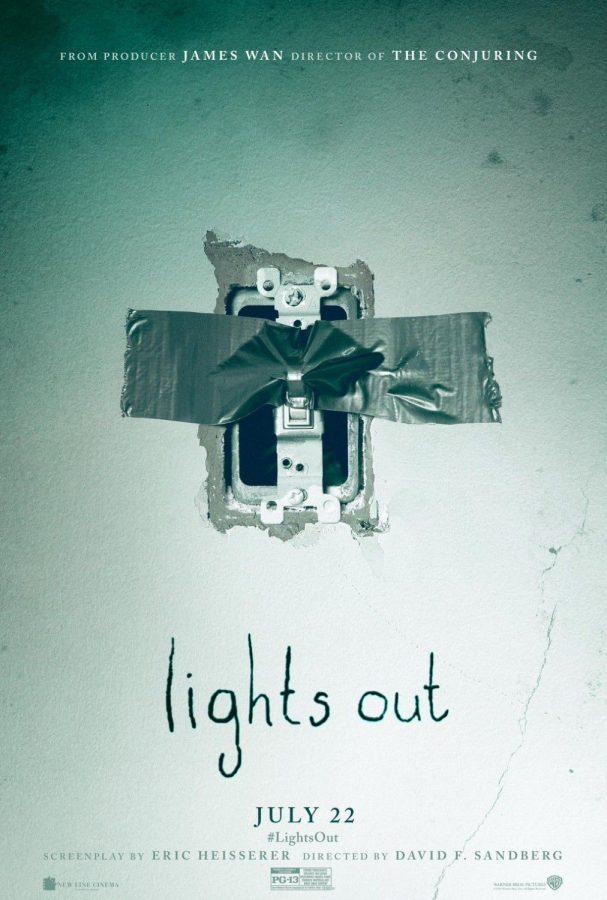 As it turns out, there is plenty to fear about the dark.

When single mother Sophie’s dwindling mental health begins affecting her ability to raise her young son Martin, her daughter Rebecca and Rebecca’s boyfriend Bret intervene, causing friction within the family. All the while Diana, a malevolent, monstrous woman who can only exist in the darkness, stalks the family.

James Wan, the director behind the helm of “The Conjuring” franchise, took a step back and instead produced this film. What makes this film so special is that “Lights Out” was originally a short film back in 2013 by director David Sandberg. It went quickly went viral and got Sandberg backing from Warner Bros. and a $4 million budget to turn it into a full-length film. Let me tell you, he did not waste his shot.

The first thing on everyone’s minds when a new horror film comes is the question “Is it scary?” As someone with a fairly high tolerance for horror, I can honestly say that I was genuinely scared. It definitely helps that I viewed “Lights Out” in a half-empty theater at night, it made me feel incredibly vulnerable knowing that that was exactly how Diana hunted her victims.

I went into this film having enjoyed the short film three years ago, but skeptical of the trailer. It looked like another bland mess of jump scares, but I was wrong. Yes, there are jump scares, but where it comes off as lazy in other films it fit perfectly for this one’s premise. A solid 80 percent of the scare tactics worked for me, but the others were too predictable, as jump scares often are. Still, that’s better than a lot of scary movies in recent years.

What I liked best about this film, though, was its story. When you go into a horror film nowadays, you expect a loose plot around the scares, but “Lights Out” delivered so much more than that. The story provided not only one of the best horror films I’ve seen in recent years, but a solid familial drama as well.

However, there were a few tiny plot hole-ish scenes I can’t help but nitpick. The monster was only supposed to have been able to maneuver through the darkness, yet in some scenes, she was invisibly present in a lit room. It bugged me that the story didn’t follow its own rules all the time.

Due to the nature of the film, special effects were minimalist and relied entirely upon lighting and sound mixing, so major kudos is in order for the creative team who kept the look and sound of “Lights Out” crisp and chilling. Director Sandberg, too, showed obvious care for his specific vision. The shots were claustrophobic, the actors’ performances cohesive and well conceptualized and he cut the unnecessary fat out of this briskly paced, hour and a half long movie. The final product is incredibly professional considering that this is Sandberg’s debut as a major director.

My only main grievance with this film from a technical aspect is that the monster Diana’s design wasn’t as good as in the short film. The previous design, while low-budget, was more unique and stuck more in your memory. This one was much more run of the mill for the horror genre today, very reminiscent of the film “Mama.”

What I was most impressed by were the performances in this film. This has been a great year for child actors, something I never thought I’d say with such delight. Gabriel Bateman as Martin was the stand out for me. Barely 11 years old, he showed acting chops and an understanding in body language a lot of adult actors could stand to take some notes from. The rest of the ensemble as well did a great job all around. They each fully realized who their characters were and conveyed the honest stress and terror of their family’s deterioration amidst the haunting.

In the end, “Lights Out” was thoughtful and had so much more depth to its story that anyone expected. The scares were mostly effective, even if the monster’s design didn’t work for me. There wasn’t a weak link to be found in the cast, but its youngest member stood out, further proving that 2016 is the year of child actors. I like that Wan and Warner Bros. took a chance on this indie project. It goes to show that there is so much talent yet to be found beyond those already established in Hollywood.