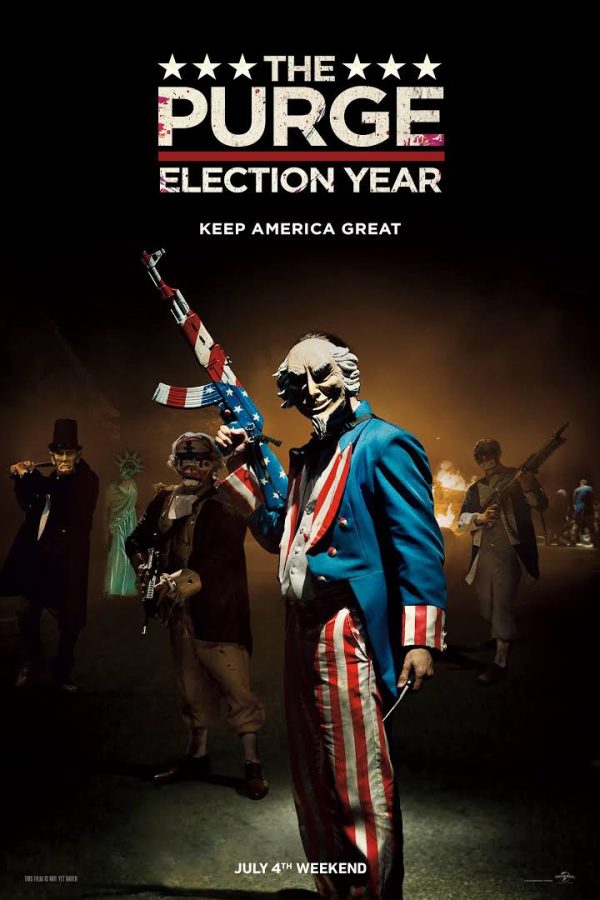 The best way to describe “The Purge” franchise is that it is a decent idea with terrible execution.

“The Purge: Election Year,” the third installment in its franchise, has been heavily anticipated as a summer must-see. Set more than a decade after the events of the original movie, Sen. Charlie Roan (Elizabeth Mitchell) is running for president on the highly divisive platform that the United States end the Purge. Angering The New Founding Fathers, the government conspires to have her assassinated by their death squads during the Purge, forcing Roan and her loyal bodyguard Leo Barnes (Frank Grillo) to fight to survive the night.

What you must understand first and foremost is that “The Purge: Election Year” is nothing short of laughably horrible. It is quite possibly the worst movie I have seen all year, in fact. James DeMonaco single-handedly wrote and directed each installment within the “The Purge” franchise and is obviously trying to become this generation’s infinitely gorier and much tackier Tim Burton.

Everything from set design to the characters to the musical choices are highly stylized and cohesive to what this movie was. This was a project with a $10 million budget and was distributed by one of the top film studios in the world when it looks more akin to a low-budget music video set in an abandoned Hot Topic. Somehow the production team and studio itself looked at this and agreed “Yes, this is the best we could do and I’m proud.” I can’t even take this movie seriously enough to get properly angry about that thought.

There are no real characters in this movie. We have Roan, a politician unafraid to anger her colleagues for a greater good, and she had potential to be a cool lead after we learn her back story. She drowned in the bloodbath that was this story, though, and lost any semblance of depth. Barnes, too, was a character who came off like a potentially compelling action hero, but the lack of plot or clever dialogue makes him just another boring player in the Purge. Everyone else was a faceless cartoon character with no personality or motivation aside from pointless gratuitous violence.

The dialogue was unbelievably cheesy, so bad in fact that I cringe to imagine what the first draft of this script must have been like if this was the finished project. This is a movie you could watch strictly to pick apart with your friends because it is just that terrible and you will definitely be quoting the crazier, campier lines for a couple of days. I cannot stress enough just how terrible both the over-the-top delivery and every line of dialogue truly is.

What’s pitiful about “The Purge: Election Year” is that it thinks it’s relevant. With the presidential election looming, Roan is intended to be a Clinton-Sanders hybrid, where the New Founding Fathers are the personification of what we’ve all been joking Trump’s presidency would be like. This is glimpsed through a funhouse mirror, though, so any slight hope the project had of resonating on some level with its audience was dead on arrival.

This movie is stylized, though, and it works on that single level if only in terms of technical cohesiveness. In the midst of the Purge, everything and everyone is neon, bedazzled and bloody and the music and sets are equally campy and juvenile. There is one scene in particular where a group of young girls in tutus roll up in a car covered in fairy lights blaring “Party in the USA” before they go to town on everyone. Everyone in my theater busted up at that. It was the single highlight of the movie.

My advice is this: If for whatever reason you feel compelled to see this poorly acted, horribly written train wreck, you are either a loyal fan of the franchise and enjoy the mindlessness of it (to each their own), or you’re like my friend group and need a new top pick for bad movie night.