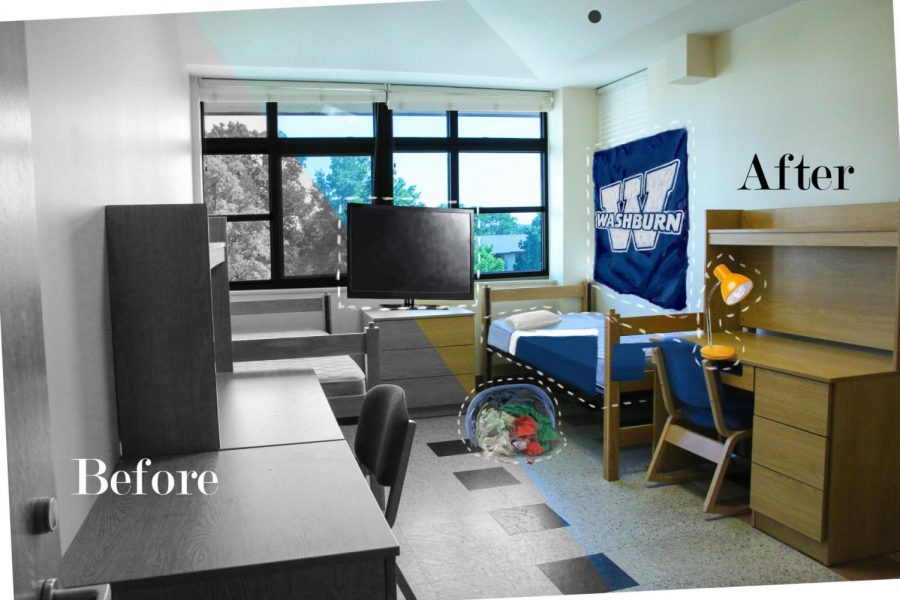 For many traditional students, living in the on-campus residence halls is their first experience living on their own. For some, living independently comes naturally while for others it can be a little more difficult, but in both situations students learn a lot about living on their own as they go.

Ally Burr, a sophomore at Washburn University, recently accepted a position as a Residential Assistant, making her a part of the team dedicated to making that first year on one’s own a little easier. She recalled her own experience moving into the dorms as a freshman.

“I wish I would have better organized myself when I first moved in, because I thought that I was going to bring way too much stuff,” Burr said. “I thought I wasn’t going to have enough room, but I ended up having too little stuff, and then I was stuck three hours from home without certain things that I need. It’s a matter of before moving in, making sure you have everything you need, and don’t worry about having too much room, because you will.”

To reinforce her previous point, Burr confirmed that the Living Learning Center dorms are much bigger than they seem with a first impression.

“Once you move in, you and your roommate can coordinate how much stuff each other has,” Burr said. “Some people bring more than others, and some go home a lot so they just don’t have a lot here. Your roommates can totally help you with that.”

On interior decoration, Burr said that hanging pictures or paintings on the walls of the dorms with damage-free adhesive hooks is a simple way to make the room feel a little more like home.

Burr said her biggest piece of advice overall is to take advantage of living right next door to all of the activities hosted on campus.

“The number one thing I see with my classmates and incoming freshmen is that if you’re not living on campus, you’re kind of out of the loop and you’re not meeting as many people. Student life is going to be on campus, and so you’re going to want to be part of that,” Burr said.

This is an article from the Spring/Summer 2016 Bod Magazine. Pick up your FREE copy today WITH additional content in front of the Student Media Office located on the lower level of Memorial Union.