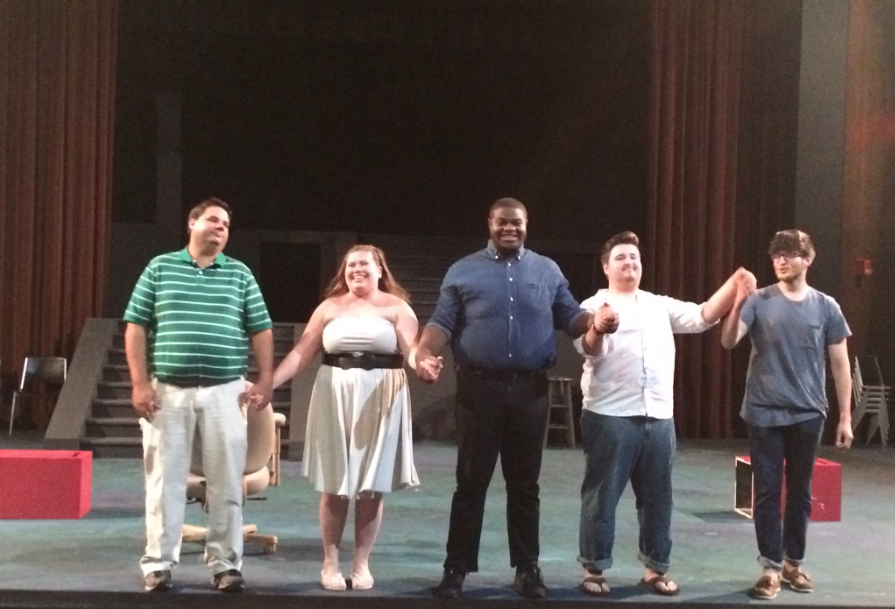 "Super Actors": The cast of the final play in the festival, "The Ex Men: An Uncanny Fantasy," take their bows after the show.

As the name suggests, the event spanned over a 24-hour period, and was put on by The Ad Astra Theatre Ensemble. It began at 7 p.m. on July 29, when open auditions were held, in which actors gave a short monologue with an interesting prop before writers and directors chose their casts. The actors were then dismissed while the writers returned home to write their scripts overnight.

The final drafts of their plays were due to the Ad Astra Board by 5 a.m. the following morning. The rest of the day was devoted to the casts learning their roles and working with their directors before the 7 p.m. show that evening open to the public.

There were six unique plays presented.

The first was “Dog Gone It,” written by Megan Becker. It was directed by Bryce Korf and starred Bill Franks, Shawn Nyberg, Jayme Basinger and Sally Roediger. The play told the story of a married couple, where the husband is sent out to buy dog food multiple times and returned each time with a newly-adopted pet and an increasingly aggravated wife.

“Dog Gone It” was comedic in all the right ways and well represented the real-life struggles any pet loving couple could potentially face. The plot seemed straight out of an episode of your favorite sitcom.

The second play, titled “Cheery Charlie at 8 a.m.”, was written by Cassidy Tilden, directed by Marcus Hennis, and starred Brian Roster, Heather Ives, Michael Anschutz and Katie Kingman. This play gave the audience a behind-the-scenes look at a children’s T.V. show, where the star finds out he is getting a unique new co-star.

“Cheery Charlie at 8 a.m.” was another comedy, except this one was a little edgier. A lot of adult language was used, but was all used in a purposeful way that helped further the plot and leave the audience laughing.

The third play, “The Oldest Story,” was written by John Hanna, directed by Stephanie Schuttera, and starred Melissa Cummins, Jon Trotter, Melissa Boyer and Robin Bonsail. This play was about archaeologists discussing “ancient” artifacts that helped prove that over the thousands of years, nothing really changes.

“The Oldest Story” had a dry, well-educated humor that seemed to fall upon deaf ears when presented to the audience. That being said, it was a unique play that offered commentary that made you really think about the way our generation will be remembered.

The fourth play, “Baby on a Plane,” was directed by Erin McGinnis, written by Kevin Rabas and starred Scott Kickhaefer, Jeni Thomas, Marjorie Lathrop and Michelle Carson. It detailed a flight taken by a couple whose seats weren’t next to each other and a mother with questionable parenting motives.

“Baby on a Plane” tackled issues that could arise in questionable parenting, as well as insecurity in relationships. It did so with edgy comedy that could have been taken negatively with its dumb blonde and controlling wife stereotypes.

The fifth play, “Claim to Fame,” was written by Doug Goheen, directed by Brent Sigman and starred Marvin Stottlemire, David Pomeroy and Annie Wilcox. This play was set up as an interview with nine different characters, (five played by Pomeroy, four played by Wilcox) discussing what their claim to fame would be if they were to die today.

“Claim to Fame”, while still comedic, was the deepest of the six plays presented. It presented the intense topic in such a subtle way that afterwards, left you thinking about what your own claim to fame would be.

The final play, “The Ex Men: An Uncanny Fantasy,” was written by Lisa Greenwood, directed by Jeff Boyer, and starred Rachel Koch, Bryce Stallons, Edward Griffin, William Ash and Travis Privat. It detailed the inner thoughts and behaviors of a young woman stuck in her past, reliving her previous relationships.

“The Ex Men: An Uncanny Fantasy” was not your average romantic comedy play. It used humor to tackle an issue that many people struggle with – being stuck reliving your youth in your own head, rather than embracing and fully experiencing your current reality. It got strong laughs, but also left the audience thinking.

The Ad Astra Theatre Ensemble approached this challenging 24-hour festival with liveliness and ease, providing the audience with a wonderfully comedic and thought-provoking night of entertainment.