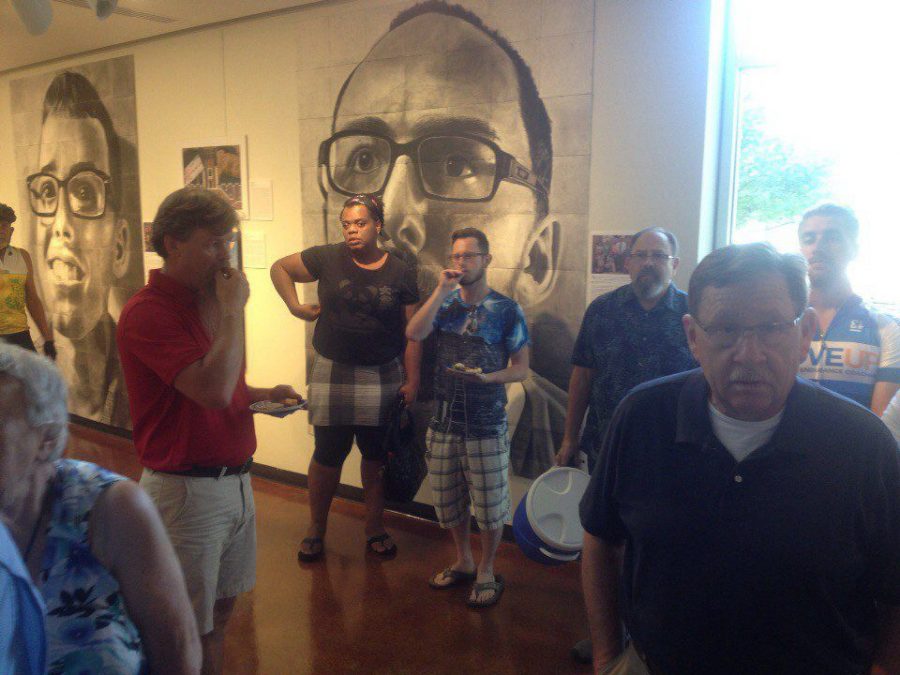 Visitors in the back of the art museum waiting in line to see the Mural in vestibule area.

Taylor, a professor of ceramics, sculpture, art education and chair of the Washburn University art department, was killed in bicycling accident last year. Artists, students, cyclists, faculty, family and friends came together to create a ceramic tribute that revealed Taylor’s most important aspects of life. The sculpture also contains hand written messages from some of Taylor’s closest friends.

During her life, Taylor has touched the hearts of many people through her love of clay and active lifestyle. She dedicated 28 years to the art department at Washburn and showed exceptional talent in working with individual students, student groups and organizations, which was recognized throughout her career. Taylor earned a bachelor’s degree from Bethany College, a master of arts degree from Emporia State University and a master of fine arts degree from Kansas State University.

“She was always about opening opportunities and creating relationships between people,” said Megan Barnes, Taylor’s former student “She is one of the main reasons why a lot of people around here have relationships with ceramics.”

June 2015, Taylor was struck by a pickup truck while riding her bicycle as a part of an amateur time trial in Crawford County.

Last March, two ceramic artists and friends of Taylor, Tanner Coleman and Alexis Gregg, came up with the design and made a proposal to seek support for the realization of the project. Their idea was well accepted and for almost half a year, a great deal of folks stepped up to help with the creation of the Memorial Mural. Both Coleman and Gregg have been guiding everyone in the construction of the masterpiece during the 50th Anniversary of the National Council on Education for the Ceramic Arts (NCECA) in Kansas City, a ceramics organization that Taylor was a leader in for many years. Even though the creation of the mural happened at the NCECA conference, the firing, glazing and installation occurred at Washburn University.

“Their design is very special because it brings a lot of the things that Glenda was involved in and enjoyed, her love for clay, her love for biking,” said Monette Mark, Art Professor at Washburn.

July 29, Washburn Art Department faculty and staff as well as Taylor’s husband Joe Saia, unveiled the permanent fixture, which drew the public to commemorate Taylor with tears and smiles. The ceremony only represented the first one of two sections covering the wall of the vestibule area in the back entrance of the art building. The second part will be created by students during the 2016 fall semester that will cover the outer wall of the ceramics’ area.

“It’s just overwhelming to see the affection that everybody seems to have for this teacher,” Saia said.

Those who could not join the dedication, are welcome to come by the art building and see the Memorial Mural and honor the memory of Glenda Taylor themselves.