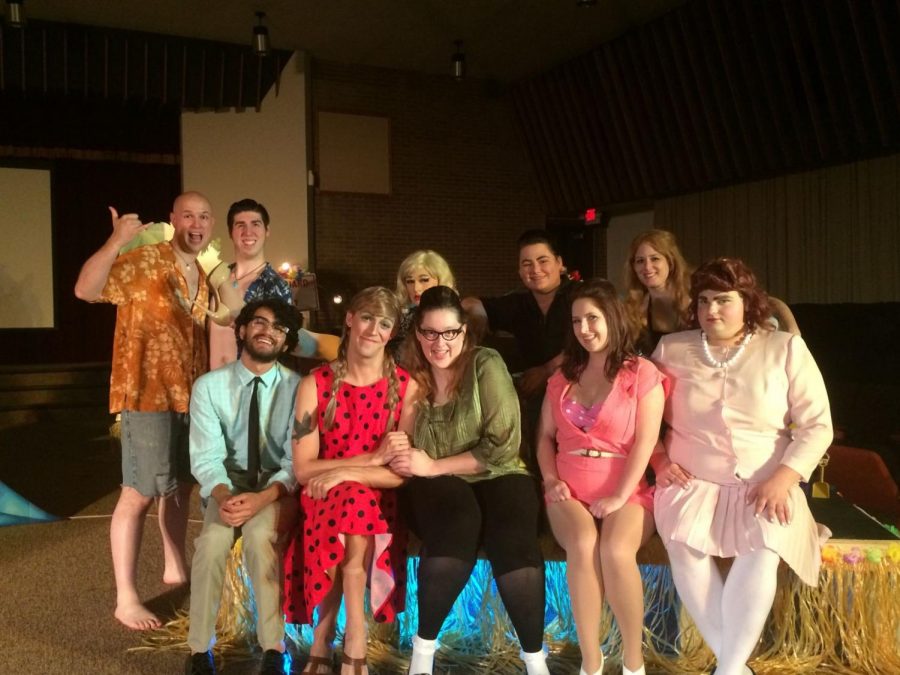 “Gidget” has nothing on these zany surfers.

Set in 1960s Malibu, California, “Psycho Beach Party” follows teenager Chicklet (Alex Laughlin) as she learns to surf with the boys and come into her own as an adult. However, when her undiagnosed multiple personality disorder causes her to unknowingly begin terrorizing the beach goers, the group’s summertime shenanigans are anything but wholesome.

“Psycho Beach Party” is an original by local playwright Charles Busch. The play is a twist on the 1960s teen beach genre, directly referencing the iconic hit franchise “Gidget.” A fun way that the show played this up -aside from numerous side gags and some clever use of genre tropes- was using a projection screen for the backdrop. The cast even went to the trouble of filming a short introductory piece reminiscent of opening title sequences of the decade and genre that played as the cast made their entrance, as well as end credits. The whole effect came off as cheekily self-aware and took the overall production value to the next level.

From a technical aspect, “Psycho Beach Party” was stellar. Everything from clever lighting placements to the sound mixing to the dynamic set design had a truly professional flare. The overall effect gave the show a color saturated and wacky-fun aesthetic straight out of the ’60s with nary a tech cue missed. Well done.

I cannot praise the cast enough for how committed they all were to their roles. Aside from the physical comedy and easy-going rapport necessary to convincingly portray this zany pack of friends, four cast members had the additional challenge of cross-dressing for their roles. The end result was hilarious Easily my favorite performances of the entire show were two such roles: Chicklet (Laughlin) and Bettina (Michael Anschutz). These two are coincidentally two current Washburn thespians, and I’ve got to say that they do their school proud in their performances.

Chicklet, our lead, is a spunky young girl who just wants to fit in. This is made difficult, however, by her multitude of alternate personalities she is unaware of, most notably her super villain sex kitten self Anne Bowman. Laughlin was truly committed to his role through his equal parts hilarious and unsettling body language to portray his character’s innocent and malicious sides. Bettina is a Hollywood starlet à la Marilyn Monroe gone rogue. She wants a break from her career damaging contracts and is hiding out in Malibu while scouting for new projects. Anschutz impressed me with his campy glamor and strong deadpan humor. Both Anschutz and Laughlin had a lot of help form costuming and make-up, but both excelled because of their on-stage charm.

Other stand-outs included Corey Perkins and AJ Dome, who portrayed a sweetly complex bromance turned romance. Another crowd favorite was Kayla Rodgers as Marvel Anne, the bubble-headed beauty queen with a one track mind for sex and marriage.

My only issue with “Psycho Beach Party” was with the writing itself. While the majority of the story was fun, snappy and wonderfully irreverent, some bits went a notch too far. Specifically, Berdine, Chicklet’s nerdy best friend, and her analytical soliloquies. The first time made sense to the story, every time after that was a buzzkill for the comedic energy on stage. That’s nothing against her actress’s performance, just the way her character is written. The ending, too, was somewhat strange to me, in how we resolved the issue of Chicklet’s conflicting personalities.

This show was about as tastefully done as it could be. There is a slew of sex jokes and swearing not suitable for a younger audience, but there is nothing anyone with a healthy sense of humor would find offensive. The cast is talented and obviously had fun, and the production value is high for community theater. If one can get past a couple iffy writing choices within the script and focus solely on the show itself, you are in for a campy delight.