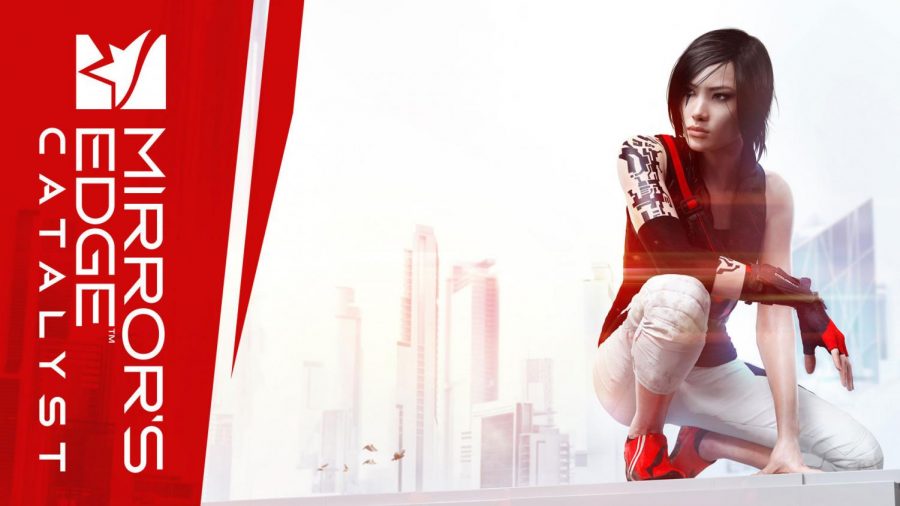 On the Edge: "Catalyst" retains the first-person platforming of its predecessor. The game was met with mixed reviews upon release, and continues to be divisive amongst fans of the original.

Whatever problems it may have, “Mirror’s Edge: Catalyst” revives the fast-paced thrill ride of the original.

Released June 7, “Mirror’s Edge: Catalyst” is the long overdue sequel to the 2008 phenomenon “Mirror’s Edge.” The game was developed by EA DICE and published by Electronic Arts. Like the original, “Catalyst” is a first-person platformer with the player traversing a gorgeous, hyperrealistic cityscape. “Catalyst” puts the player in the swanky red running shoes of Faith Connors in her mission to weaken and ultimately overthrow the Conglomerate, a corporate oligarchy that rules the city of Glass by keeping the citizenry under constant surveillance through a massive network referred to as the Grid. Faith belongs to the Runners, a group of rebels living on rooftops that refuse to connect to the Grid.

“Catalyst” has a wonderful setting. While every person, place and thing in this universe has a painfully obvious name, Glass’s name is still quite fitting. The whole city looks sharp, angular, vibrant and clean. This environment design is a welcome departure from the typically grungy and poorly lit cyberpunk setting.

Unfortunately, the story “Catalyst” tells in this setting is the weakest part of the game. Pretty much all of the characters are bland and one-sided, with overtly symbolic names often telling the player more about someone than actions or dialogue. Icarus, the first person Faith encounters in the game, is a hotshot runner trying so hard to be her rival that it seems like a failed audition to play Iceman in “Top Gun.” The story played this straight, as if the game expects us to take Icarus seriously, but I like to think that Faith is just humoring him.

As for the plot, “Catalyst” is fairly weak. Most of the story consists of people telling Faith to go do something that will somehow stick it to the man in a roundabout way that is only explained through technobabble. Twists are hardly foreshadowed, overly convenient and simply not very interesting. Furthermore, the ending is incredibly anticlimactic and the penultimate mission is far more tense and enjoyable than the final mission. Still, at least it has an ending, which is more than I can say about the first “Mirror’s Edge.”

As with “Mirror’s Edge,” the greatest strength of “Catalyst” is not its story, but the gameplay. Broken down to its essence, the core gameplay consists of vaulting, sliding, hurdling, climbing and wall running through urban environments to get from point A to point B. In this regard, “Catalyst” adds very little to the platforming elements of the first game, but the free running of the original is solid enough that “Catalyst” didn’t need to change anything to keep the gameplay fun.

The two most jarring changes “Catalyst” brings are the open world environment and character progression. Taking “Mirror’s Edge” from linear levels to an open world is a surprising design choice, though not altogether a bad one. Often in games, open environments negatively affect the quality of level design, though aside from a few disorienting areas, the rooftops of Glass are well laid out. The main missions take place in more linear areas outside of the open world to ensure players will have opportunities to test their platforming skills in well designed levels.

The open world also turns Runner’s Vision, a game mechanic that highlights certain objects in the environment to let players know where to go, from a hand holding abstraction to a mechanical representation of Faith’s familiarity with the city one that is essential when navigating the environment. Runner’s Vision does not necessarily show the quickest path, leaving room for exploration and player agency.

The open world does have its downsides, though. Near the end of the game, traveling the same routes becomes tiresome. Fortunately, the main storyline doesn’t drag on too long and the game ends shortly after it starts to wear out its welcome.

As for character progression, there is no excuse. The first “Mirror’s Edge” gave players all of the tools and skills available to Faith from the beginning. It was up to the player to improve, not the character. In “Catalyst,” even basic skills, such as being able to make a 180 degree turn with a button press, have to be unlocked. Especially egregious is the fact that there is no logical reason Faith, as an experienced Runner, would not already be able to perform these actions.

Fortunately, all of the essential free running abilities can be unlocked very quickly, but that makes such a design choice no less baffling. It would be more interesting if the developers kept the gameplay exciting by creating increasingly complex routes that cause players to hone the skills they have been using throughout the game. Instead, the game gives you a new gadget to play with every couple of hours.

With all that said, the progression system is an annoyance rather than a deal breaker. After a couple of hours, none of this game’s problems impeded my enjoyment of the platforming, which is ultimately what matters. With a few odd design choices that can be overlooked, anyone who loved the original should be able to enjoy “Catalyst” as well.