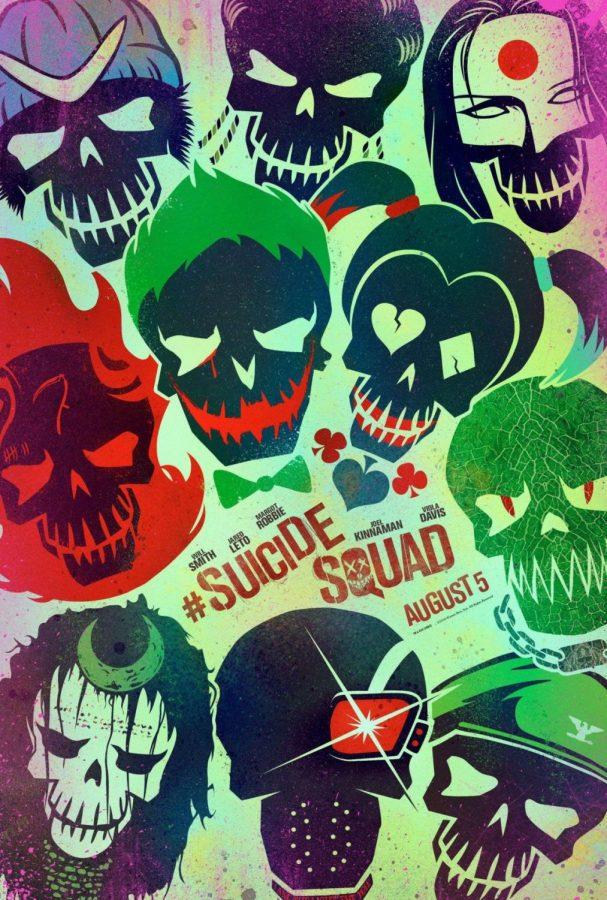 The biggest names in the "Suicide Squad" main cast include Margot Robbie, Will Smith, Viola Davis, Jai Courtney, Cara Delevigne and Jared Leto. While they filmed, the cast bonded by letting Robbie and Smith take turns tattooing most of the main cast (Smith and Davis both declined).

To be frank, “Suicide Squad” looks like it was slapped together by a Hot Topic obsessed college freshman with no sleep.

Directed by David Ayer and adapted from the best-selling DC Comics series, “Suicide Squad” tells the story of some of DC’s most deadly villains fighting for the government. When Amanda Waller (Viola Davis) unwittingly sets in motion a series of events that cause Enchantress (Cara Delevingne) to run amok, she offers some of her worst inmates at Belle Rev Penitentiary a deal: be the good guys for once and conduct covert missions for Waller in exchange for reduced sentences. The catch? If they lose or try to escape, they die.

This film had two major flaws in its inception, which unfortunately cancel out all of the good –and potential good– it had going for it. The first flaw was its complete lack of story. There was no lead character, which can sometimes work in a story if it has a clear vision, but “Suicide Squad” played out more like a generic video game in how the character introductions and the missions were structured. Our group gets a quick introduction before they have to fight their way through the city towards a beam of light (“Ghostbusters,” anyone?) to defeat the two villains. There honestly isn’t much more to it than a typical video game of the mid-2000s save for one or two emotional scenes.

Without a lead character or two to drive the story, it was hard to tell who we were supposed to focus on and who was canon fodder. No effort went into writing this script, especially the character introductions. When each character showed up, they got a quick list of facts about them and that’s all we got to know about them really. We were told who they are, not shown, and that is incredibly lazy story-telling (lazier even, than tattooing “Damaged” on the Joker’s forehead).

The film’s wacky, colorful trailers did so well because they reflected everything that fans and the general audiences wanted “Suicide Squad” to be: similar to “Guardians of the Galaxy” and not “Batman vs Superman.” Because of that, though, the studio ordered a reshoot to make certain parts of the film funnier, allow for more outrageous action sequences and to write the Joker into the script as fan service. Reshoots are fairly common. Completely changing a film’s tone and narrative in a reshoot in response to internet fan hype? Not so much. Ayer got lost in whatever vision he had for “Suicide Squad” so much so that it brings me to my second problem with it: the editing.

This film has an amazing cast who did a great job with what garbage dialogue and loose characterizations they were given. The special effects were pleasing to the eye, the music was fun, the action sequences were mostly well shot– but none of that means anything if it’s all stitched together like Frankenstein’s monster. The story moved from scene to scene choppily, as if entire major scenes were cut out (and we have confirmation now that there was at least an hour of Harley/Joker origin story scenes cut out), so we were never able to comfortably settle into the story. Ayer could hardly go more than a minute without adding a song from the soundtrack, an obvious and poorly executed copycat of “Guardians of the Galaxy.” A second or two without “Bohemian Rhapsody” or “Without Me” blasting in my ear might have allowed for some actual substance to creep its way into the story.

What really irked me, though, were our villains. Delevingne as Enchantress was a cool choice initially, but with the combination of her over-acting, weird body movements, lack of depth and the strange final costume design, she was just disappointing and not at all an imposing threat. The Joker (Jared Leto) should have been able to make or break this film, too, but the trailers deceived us. He was not the feature villain, he wasn’t even in the film for more than five minutes. There wasn’t enough screen time to adequately judge this Joker portrayal, which in itself is a disappointment considering how heavily the marketing campaign focused on his presence.

Will Smith and Margot Robbie’s respective portrayals of Deadshot and Harley Quinn were what really stole the show for me. What little character depth they had to work with, they made them shiny and exciting on the big screen. These two not only understood and respected their comic book characters’ origins, but put their own spin on them that made for truly dynamic performances when Ayer’s editing allowed. Without a doubt, Robbie, Smith and ever the scene stealer Davis carried the entire crew.

This film could have been great. A lot of the jokes were funny, some of the dramatic scenes really hit me (one with Harley in particular) and the talented cast did what they could to save the sinking ship that is “Suicide Squad.” However, between Ayer’s sloppy writing and haphazard editing skills, this film never had a chance.