Students gather at Rock the Rec, celebrate athletics and health 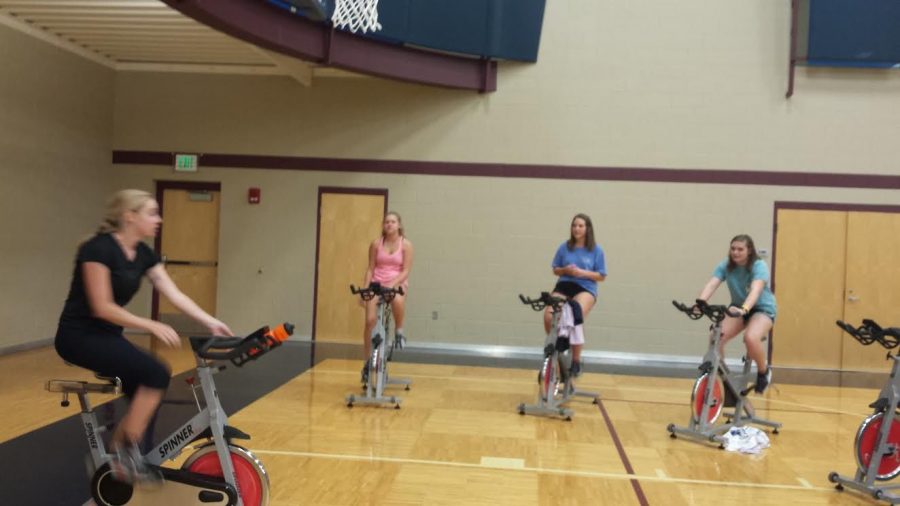 Round and round it goes: Brecken Larson, a second year Law student, is an instructor for SRWC's cycling program. The Rec Center holds both morning and evening cycling lessons that focus on different exercise programs. You can find schedules for the lessons on SRWC's website or posted throughout the building.

To introduce the student body of Washburn University to the Student Recreation and Wellness Center’s plethora of activities and services, the twelfth Rock the Rec got students moving August 19.

Both new and returning students attended the event to participate in the numerous games that the Recreation Center had organized for the event.

“It puts student energy to good use and it fits in with the attitude of the Rec center,” Cummings said. “It’s all to promote a healthy lifestyle and introduce people to the programs and services at the Rec center.”

Rock the Rec highlighted some of these programs, such as TRX suspension training and cycling classes. Brecken Larson, a second year law student, was holding a cycling class in a corner of the center’s large basketball court. Larson started teaching cycling classes last year and is the instructor for the morning cycle. Larson wants to encourage students to join a cycling class to help with their cardiovascular fitness. You can find schedules for cycling on SRWC’s page on the Washburn University website.

Some other activities at Rock the Rec highlighted the Rec Center’s very large and impressive climbing wall, which was one of the most heavily occupied activities during the events. A volleyball net was set up and attendees were challenged to serve a ball over the net and hit a line on the other side. If they hit the shirt they got to take it home with them. Four large empty trashcans were set up and people were tasked with playing Bucket Pong, throwing dodge balls into the baskets from a far distance. A free-throw contest was also held. The active videogame Just Dance was also provided as a means to exercise.

The event also highlighted the Center’s dedication to health by allowing people to participate in tests that would measure their body composition. While this was the only available test at the event Cummings assured that more tests are available during the school to help students balance their health.

James Beine, EMS major at Washburn Tech, attended Rock the Rec for the second year in a row.

“I’m back for the fun, excitement and the climbing wall,” Beine said. “When I came to Rock the Rec last year I made some good friends.”

“It’s about getting people to come together,” Cummings said. “Welcome week is a great way to provide students with some entertainment, and maybe teach them a few things before the grind of school begins.”

To find out more about class scheduling please visit the SRWC website. The Rec Center’s next big activity starts with their competition series “Earned not Given.” Its first round begins Sep. 13.