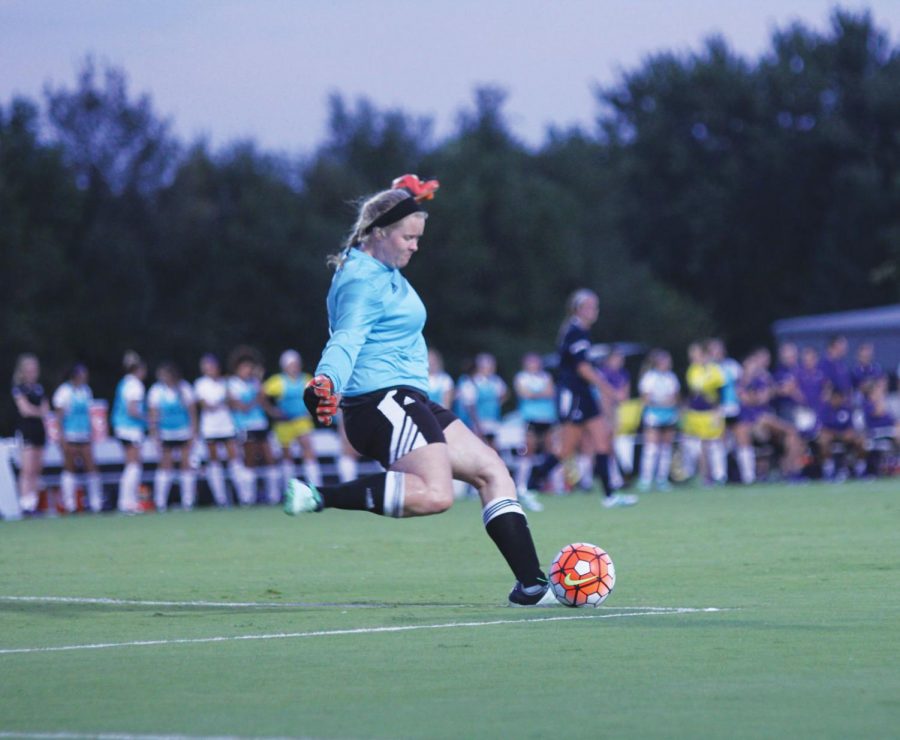 Goal Kick: Freshman goalie, Riley Trent kicks the ball during a goal kick as the Ichabods launch a counterattack. Riley recorded two saves in the goal over 22 minutes of play against Kansas State.

The Ichabods started the season a little rough this year with a 5-0 loss against Kansas State during an exhibition game August 16, but their potential shines through as they integrate their new freshman talents into the roster.

The Washburn women’s soccer team began its season with an exhibition game against Kansas State’s brand new women’s soccer team. The Ichabods went into the game with only three practices under their belt, thus viewing the game as an opportunity to practice and grow their skills.

“We made some mistakes, obviously some growing pains with some girls in positions they don’t normally play that I threw them into,” said coach, Chris Jones. “The level of play is going to be hard to match right away. Really we’re going into it not expecting anything, not knowing anything. We couldn’t predict what was going to happen.”

Among the new team members this year are many great talents of the freshman class such as midfielders Emma Wetzel and Kyrsa Krier, forwards Emily Gartner, Olivia Grasso and Alyssa Hernandes, defender Cassie Nichols as well as a brand new goalie who saw play during the second half of the Kansas State game, Riley Trent.

The game put a lot of pressure on the Washburn defense, keeping the majority of the game on their side of the field with 23 shots: 11 shots on goal and five goals in total for Kansas State. Last season, the Ichabod’s goal was in sole possession of Kaitlin Minnich, now a junior. Trent is the first to be in the goal besides Minnich for Washburn in over a year, meaning that a defensive game put a lot of pressure on her as a brand new goalie in college.

“I enjoy that, I mean, I would enjoy for the ball not to be coming at me because that means we are playing stronger defensively, but I enjoy my job. I’m proud of how we played,” said Trent.

The reflexes on the team seemed a bit slow, but the Ichabods certainly showed off with stellar footwork and a sense of field placement, the girls went where they needed to be so that they could work as a team. While the offense certainly faltered, with only one shot on goal from the Ichabods, the cooperation between the offense and defense with the midfielders stood out as one of the team’s strong suits in the game.

“They’re excited to be here,” Coach Jones said, speaking about the new team members. “Coming in, it’s nerve-wracking to meet new girls, meet a team that’s so close and try to find your way in. Our older girls, our returners, really allowed them to do that right away.”

With new freshman and upperclassmen still growing with leadership experience, the Ichabods are looking at a bright season.

Despite losing to Kansas State, the Ichabods aren’t giving any excuses.

“Our girls are growing in confidence every day. Obviously the scoreboard shows we lost 5-0, but overall, I thought we played really well; I thought we kept possession really well. I was overall happy with the result, our result as a team and our attitude towards the game. We kept fighting whether it was 1-0 or 5-0.”

The Ichabods return to the pitch Sept. 1 against Upper Iowa University in Marshall, Minnesota before following up two days later against Southwest Minnesota State University on the same field. The Ichabod’s first home game with be Sept. 9 against Northwestern Oklahoma University.