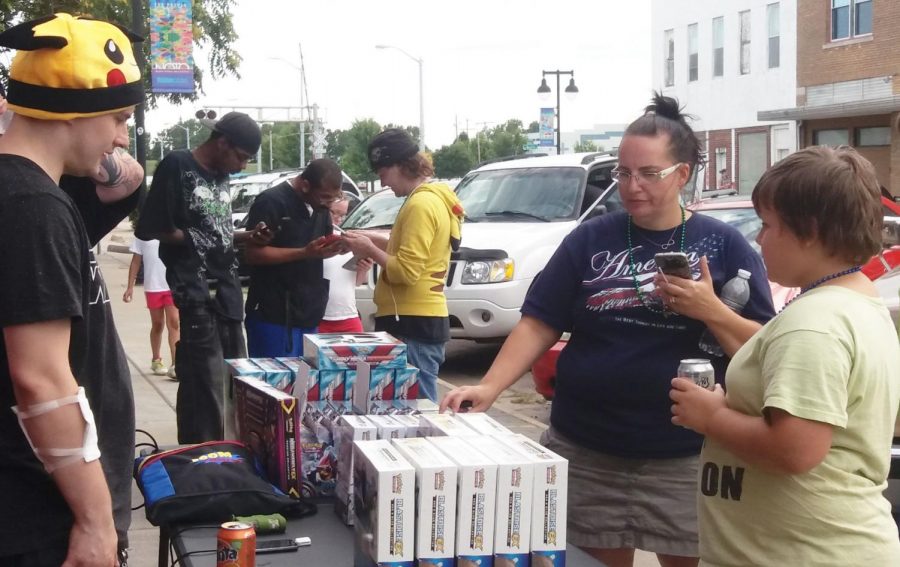 John Charles Cutchins shows card sets cut to half price to his customers. Cutchins attended the event to both promote BOOM Comics and support Mystic Addiction.

Mystic Addiction Tattoos in North Topeka hosted its first Pokemon GO event, GO in NOTO, on August 6 from 5 to 9 p.m., bringing together local businesses and offering attendees a chance to win prizes and save money on local vendor’s merchandise.

Two blocks of Kansas Avenue were lit up with Pokemon lures, courtesy of Mystic Addiction, and an egg hunt and Pokemon scavenger hunt was conducted.

“We want to stay active in the community, because we have been doing really well,” said Tyrone Magers, owner of Mystic Addiction Tattoos. “We’re going to try to do an event every month, and we’ll probably do a few more Pokemon events and see if the craze dies down.”

Mystic Addiction was essentially turned into a Pokemon center, where trainers could get away from the heat and enjoy cupcakes, candy and drinks. The Pokemon Johto League series played and players sat on couches to watch.

A sale on palm-sized tattoos was based on a player’s level in the game. The tattoos would cost $100 minus your achievement level. For example: A level 25 player would pay $75 for their tattoo.

Due to the high volume of sponsors for the event –including donations from BOOM Comics, Vintage Stock, Game Stop, Gamers HQ and The Gatekeeper– larger ticket items were included such as t-shirts, other apparel, card packs and gift cards.

“[Mystic Addiction is] a great company, and just has so much to offer,” said John Charles Cutchins, head of sales for BOOM Comics. “We partnered up with them and brought some prizes for the kids attending. We know how important this game is to the community right now.”

Reuben Juarez, an attendee at GO in NOTO, said he hoped that more events like this happen.

“I got to know a lot of new people,” Juarez said. “I started playing from the very beginning. I love it, it’s fun, and it’s brought the community together.”

Magers said the turnout for this event was far greater than he had hoped, and he certainly plans to keep holding GO in NOTO if the support is there.

“The more you give into the community, the more you’re going to get,” Magers said. “When you bring the people in around you, and they feel they are a part of what you’re doing, you are better able to all support each other.”