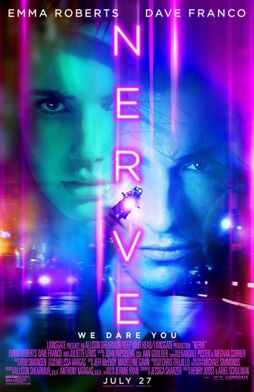 Internet culture: "Nerve" is obsessed with exploring sci-fi concepts around the dark web, computer hacking and the culture of hiding behind the mask of a screen. In a way, these concepts feel directly tied to the themes of the documentary "Catfish" which –by no coincidence– the directors of "Catfish" also directed "Nerve."

Going into a movie with low expectations and being pleasantly surprised is a true joy for movie goers.

Vee (Emma Roberts), a reserved high school senior, is pushed by her friends to join a new alternate reality game called Nerve. In the game, people who play are offered large amounts of money to complete dares which become increasingly difficult and usually border on illegal. If a player quits, they lose all earned money, so the game continues until there is only one player left. As the night goes on Vee is paired with Ian (Dave Franco), and the two soon realize that Nerve is a much darker game than they originally thought.

The film’s premise leans heavily on a weak concept, but this concept provides for incredibly suspenseful moments of action. What the film lacks in enjoyably nuanced characters and plot it delivers in moments of true nail-biting suspense.

“Nerve” is plagued by a weak cast of characters. As charismatic and enjoyable the performances of Dave Franco, Emma Roberts, Emily Meade and Colson Richards are, their characters are poorly written. Not so much stereotypes, as they are all the same characters with attempts at personalities and backstory that just fall flat in their execution. “Nerve” also fails to offer proper closure to each character’s story, not to mention that the film’s ending itself has one of the worst and most blatant examples of deus ex machina I have ever seen.

That being said, the movie has a breakneck pace, the story moving along with a furious, thrilling excitement. Every dare that our main protagonists get is exciting, filled with not only suspense, but a sense of true danger. The stakes never feel high enough where someone could die, but they always feel scary and unpredictable at every turn. It’s that adrenaline rush the audience feels right alongside Vee and Ian that makes the film such a fun watch.

While the weak characters and messy plot of “Nerve” stop it from being a perfect movie, there is just enough drama that viewers of this sci-fi AR rollercoaster will have their arms up the whole way through.