Doom Eternal: A Masterclass in action 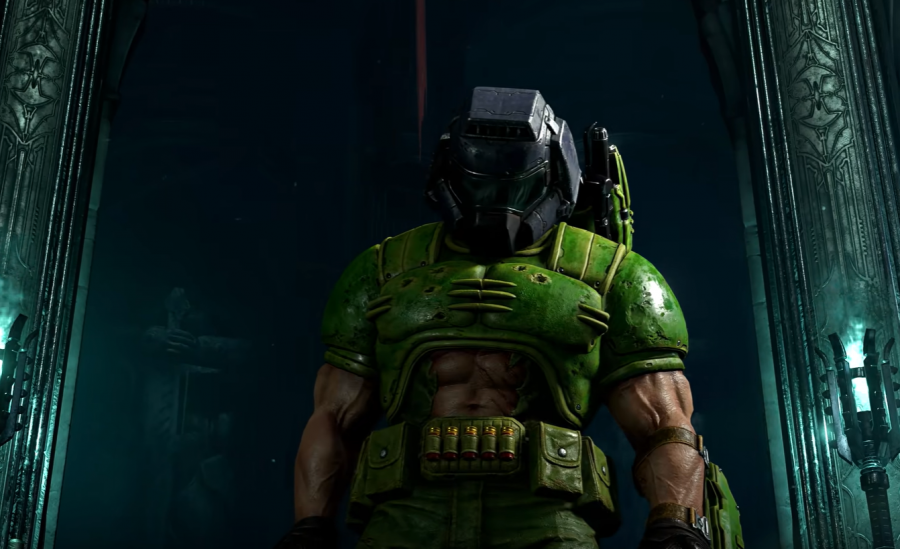 Rip and Tear: "Doom Eternal" is one of the most frenetic and satisfying games out on the market today. Pictured is the Doomslayer in my personal favorite alternate outfit, the classic Doomguy.

I’ve had a complicated relationship with “Doom” games.

I first tried the 2016 reboot and I hated it – it just didn’t click for me. I forced myself to complete it.

Fast forward a couple years later, and I fell in love with it. While it does have its flaws –repetitive environments and little issues here and there, it is an excellent game with a decent soundtrack and cathartic gameplay.

“Doom Eternal” takes place sometime after Doom 2016, and players return into the boots of the Doom Slayer — the musclebound certified badass with space marine armor and an arsenal of diverse guns.

The advanced weaponry includes a “steel barreled sword of vengeance” A.K.A. the super shotgun.

“Doom” has always been as simple as you wanted it to be. The gist is, the Slayer is good at killing demons sent from hell and takes pleasure in doing it. While in the 2016 game, the Doom Slayer was confined to Mars, this time, the legions of hell invaded Earth thereby causing an apocalypse.

Seeking to eliminate more demons and save a couple of humans, the Doom Slayer trots over Earth killing the demons scourging the land.

This iteration of the story is expanded with lengthy cut scenes.

Most of the game consists of shooting a variety of demons returning from previous games, as well as new ones. There are old favorites like the imp, the hell knight and the cacodemon and new enemies like the marauder.

You are given several weapons to dispatch enemies.

Two shotguns, a plasma rifle, the iconic BFG 9000, a new shoulder mounted grenade launcher, a flame thrower, a chainsaw and best of all, bare hands.

Much like the previous game, the best way to play “Doom Eternal” is on hard difficulty.

As the lead director of the project, Hugo Martin has said it is a thinking man’s game and if you make one wrong move it can lead to your death – repeatedly.

I never had any cheap deaths that weren’t my fault, aside from the previously mentioned Marauder (the only way to beat him is to persevere and be patient) and when you finally get through and survive, it feels immensely satisfying.

“Doom Eternal” has unlockable skins for the slayer, his guns and enemies. It has even more violent glory kills, platforming and diverse environments.

It would be a crime not to mention Mick Gordon’s electro-metal soundtrack. His work on 2016’s game has been iconic to gamers ever since the game’s release.

While only available to collector’s edition owners, I am waiting to get this album on Spotify.

It fits perfectly with the frenetic brutality of Eternal and heightens it to new levels.

“Doom Eternal” may be one of the greatest first person shooters I have ever had the pleasure of playing. It’s everything you could want out of a violent action movie turned into a video game.

“Doom Eternal” is a metal infused fever dream that is the ultimate power fantasy.