Washburn students get engaged with voting 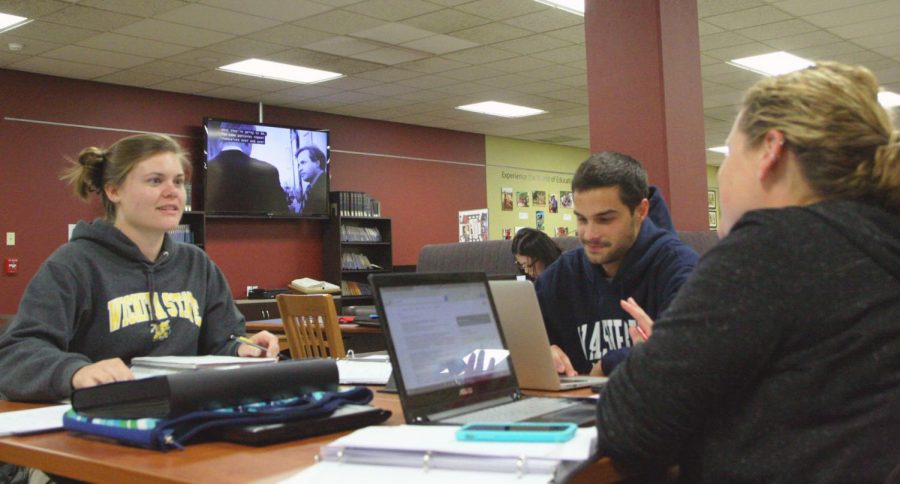 Young people’s voting habits have historically been so unpredictable that the group is rarely targeted in political campaigns.

In this current election race, Donald Trump and Hillary Clinton have sparked a fire in young people. There is certainly something to be said about the energy building in young people around the 2016 presidential election, but the excitement can only go so far. Action has to come from the enthusiasm.

Sean Bird, Associate Dean of Libraries, said about 100 students showed up to watch the debate, many of them listening closely to both candidates with an occasional chuckle.

The work of the LWVK speaks volumes on the actual involvement of students in the election. Being registered to vote is one of the biggest ways young people can get involved in the election, as that allows their opinion to have a real, measurable impact on the results.

Natasha Martinez, junior political science major, helped establish Washburn’s chapter of LWVK. She has helped to prepare and run multiple voter registration drives, interacting one-on-one with students as they learn how to register.

“I would like to say that students should know that they don’t have to be political to vote,” Natasha said. “There are so many things that affect them on a daily basis and the local elections are crucial for that.”

In addition to the work of the LWVK, some peer educators in the First Year Experience (FYE) office have chosen to incorporate a short lesson on voter registration into the WU 101 curriculum. For example, peer educators for Irene Olivares, first generation retention specialist, have planned a day in their class to teach freshmen students about deadlines, requirements and the importance of voting as a young person. Washburn believes WU 101 should include lessons on things such as civic engagement, which is a category that voter registration and voting fall neatly into.

“It is our [FYE office] responsibility to help students learn to evaluate the credibility of information so they can make an informed decision,” Barraclough said. “Their vote truly does matter, but it needs to be an informed vote.”

A quick survey of 20 students in Mabee Library showed that the majority of the students interviewed were not educated on the requirements for voter registration, making the work of the LWVK on campus all the more important.

However, despite a lack of thorough understanding of form requirements, students were well-versed in many election issues.