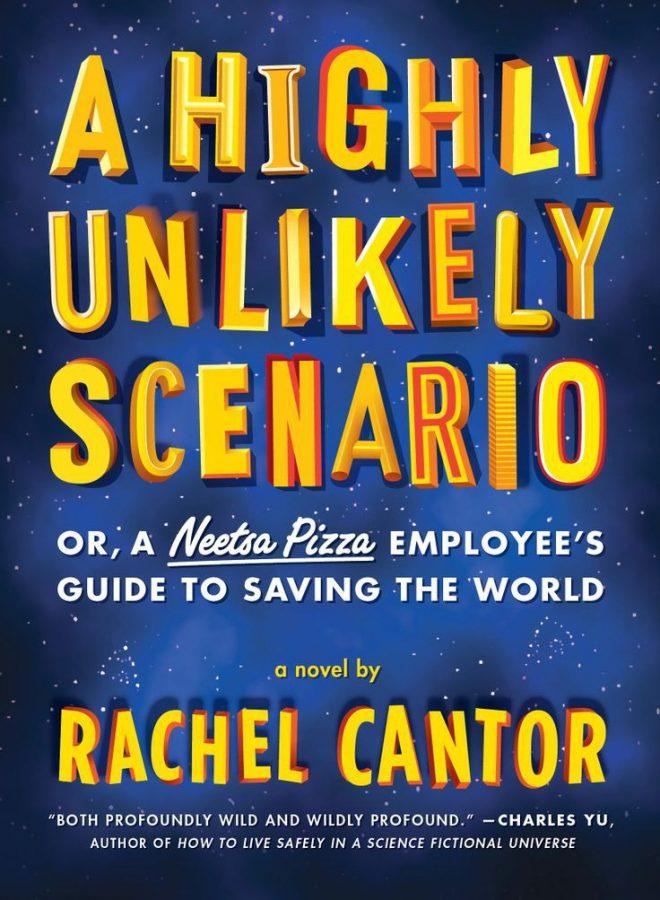 “A Highly Unlikely Scenario” is author Rachel Cantor’s first solo novel, as well as her best known work. She has co-written three other works, and published “Good On Paper,” a contemporary novel, January 2016.

“Hitchhiker’s Guide to the Galaxy” did this premise better.

In a future where fast-food chains act essentially as political parties, Leonard is stuck working customer service for Neeta Pizza, a part of the Pythagorean food chain. Every over the phone scenario already having a scripted response, he lives his careful life on autopilot without ever having to leave home. That is, until he receives a call from Christopher Columbus.

There’s a lot to unpack here. I’m not even sure how to classify this novel; it’s a strange patch work of science fiction, satire, adventure and philosophy. I did like that much about “A Highly Unlikely Scenario” – it raised some cool commentary on capitalism, politics and the realities of revolution (whether it be against your government or who you used to be). I learned a lot about Jewish mysticism and medieval historical figures, which – like the rest of this novel – was completely unexpected. I appreciate a story that can both inform and make me think, but this novel unfortunately failed to provide satisfactory payoff to its big questions.

What bugs me the most is that this story actually had some cool ideas. It was the aimlessness of the plot and lack of a clear message that turned me off to this story. This story got so lost in its own pursuit to be interesting and unique that it became undeniably silly. “A Highly Unlikely Scenario” was ambitious to a fault and completely unpolished.

The novel’s hapless main character was a problem as well. So much happened to Leonard, but he accomplished so little himself. It’s one thing to write a character that eventually comes into their own, but Leonard was so devoid of personality or agency that he remained a blank slate up until the final quarter of the story, and even then he still bored me.

This novel should have been about Carol, Leonard’s sister, a single mom and secret revolutionary. She intrigued me from start to finish and carried the bulk of the action. Where Leonard’s story was mostly one of personal growth through introspection, hers had all the makings of a quality dystopian novel if it had been fleshed out.

This was not an inherently bad book. There is merit to having read it – a unique premise, philosophical themes, a good degree of witty humor and interesting side characters – but none of that matters if the structure is messy, the overarching plot is haphazard and the main character painfully under-written and uninteresting. Take the novel with a grain of salt and use it as a spring board for further discussion, but don’t expect a gem.