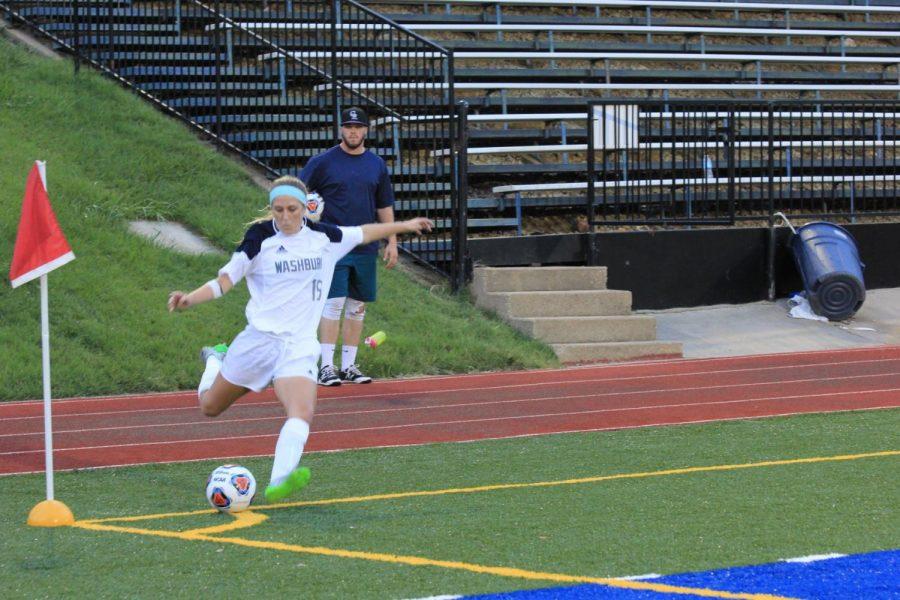 Corner: Morgan El-Attrache goes for a corner kick in the hopes of scoring against Northwestern Oklahoma in the game.

Having started the season rough around the edges with two loses, the Washburn women’s soccer team pulled through with a comeback weekend featuring two shutout games.

On Sept. 9, the team held a 3-0 lead at half time before pushing the score to 5-0 in the second half against Northwestern Oklahoma. The most important stat of note being that all of the points for Washburn were scored by different players on the team.

Usually when it comes to Washburn soccer, the most stand out player is Washburn’s traditional goal keeper all-star, Kaitlin Minnich. But the Ichabod’s forwards and midfielders kept the ball on the side of Northwestern Oklahoma for the majority of the game, meaning that Minnich only put up two saves in the whole 90 minutes of the game

Washburn shot 22 times while Northwestern Oklahoma only shot three. The five goals that they scored off of those 22 shots marks the highest number of goals for the Ichabod’s to have since 2013 in a single game.

But this only marked the beginning of the team’s comeback as they then defeated Newman on Sept. 11 1-0.

Most of the game can be attributed to Washburn’s strong defense during the game, which earned Michelle Keleher the MIAA Defensive player of the Week honor. Freshman goal keeper Riley Boomer played the entire game, and like Minnich during the previous game, had her work done for her by the defense, putting up only one save on the match.

Emily Stauffer scored the one and only game winning goal, putting her season to two goals already thanks to an assist from Katie Combs.

The Ichabods only had two shots on goal during the game, with 11 shots total to Newman’s two shots. While not the overwhelming victory that was had during the Northwestern Oklahoma game, the team didn’t disappoint their comeback weekend.

Last season the Ichabods were only 0-2-2 by this point, they didn’t even have their first win until the sixth game of the season. Now, the team is looking at a season with already greater potential simply on the timing of the victories.

Next week, the Ichabods will be playing against Emporia State Sept. 16. Emporia state currently has a 1-2-1 record, and if the Ichabods can win against them it will mark the first three-win-streak that the team has had since 2013.

With the women’s soccer team having a strong history of victory against Emporia. The Ichabods won last year’s game away in Emporia and they lead the all-time record 14-8-3 against them.

The Ichabods will play against Nebraska Kearney Sept. 18, a team that they have run fairly even with in the past several years, putting up a 1-1 tie in double overtime last season. The current record between the Ichabods and the Lopers is 2-2-3.