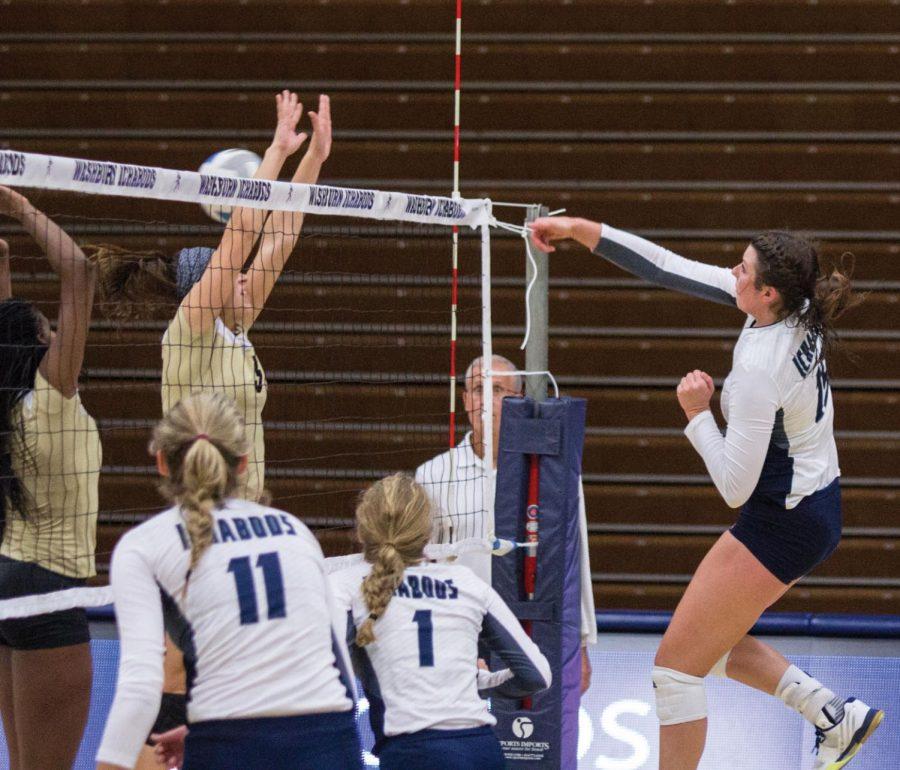 Upfront kill: Makayla Maxwell spikes the ball over the net for a kill during the last set of the match. Maxwell got four kills and four blocks in the game.

Emporia exists as Washburn’s rival, but they didn’t pose much of an obstacle to the Washburn volleyball team Sept. 20, where Washburn won their on home turf, going 3-0 on their sets.

While Emporia managed to hold Washburn in their sights, staying within six points of Washburn at the end of each set, Emporia was unable to lead a set by more than two points during the entire match before Washburn shortly caught up with them.

Except for digs, which Emporia led 47-43, Washburn led the match in every single major stat, kills and points holding the largest gap; where Washburn led 40-32 and 54-41 respectively.

Of those 40 kills, Washburn’s top three kill leaders were Sarah Vicory with 12, Leanna Willer with 10 and Megan Pedersen with 5. Vicory also led the game with 13.5 points, meaning that over 88 percent of her points were from kills, making her the MVP of the match.

“Going into it we were hoping to get a good win tonight and I think that’s what we did,” said Vicory.

Vicory, like many of her fellow teammates felt the Emporia rivalry wasn’t something they should worry about.

“Honestly, every team in the MIAA is a big rivalry for us, so we just go in and hope to win every game going with the same intensity and energy. We just need to focus on our side of the net and get our job done.”

Outside of kills, which often bring a wave of excitement to the audience, is the equally as important strategic move of blocking. At the match, two players led the team in blocks for the night, Megan Pedersen and Makayla Maxwell.

Maxwell is one of four people on the team over six feet, and her position at the front puts her constantly in the middle of the action.

“It’s exciting, definitely an exhilarating thing. You got to do your job and we all just got to work as a team. Even though I’m up in front, I still have two [teammates] up there with me who are just as important.”

Maxwell even had a message for the students of Washburn: “We need more people to come; we need more of a student section!”

Washburn’s next match will be against the University of Nebraska at Kearney, in Kearney, Nebraska Sept. 23 before they turn around and play against Fort Hays State in Hays, Kansas, Sept. 24.

“The next two teams we play are currently undefeated,” said Vicory. “So we will see how that goes, we will prepare a lot this week to play against those teams and just take it one game at a time.”

At the time of this article, Washburn has a 10-3 overall score, Nebraska-Kearney has a 15-0 record and Fort Hays State has a 12-1 record, having lost to Nebraska-Kearney during the Washburn versus Emporia State match.