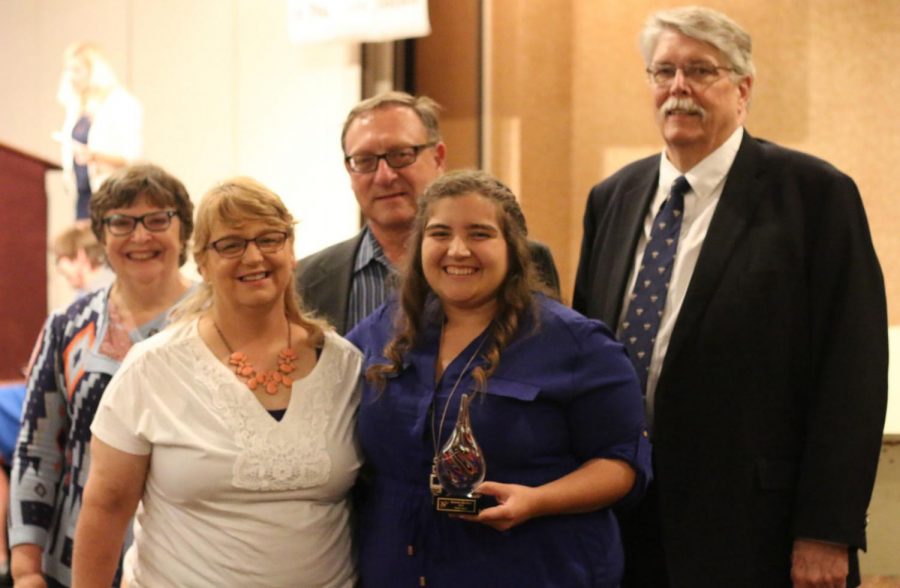 At 6:30 on Sept. 22 the Topeka Center for Peace and Justice honored Shawnee county residents who have made a positive impact on social injustice in our community. Natasha Martinez, junior political science major, received the Youth Peace Builder award.

TCPJ hosted a Peace Party and award dinner, where they presented the Peace Builder Awards. TCPJ has been holding Peace Parties that honor the community members since 2012.

The Center of Peace and Justice frequently works with juveniles, including initiating training for public schools to use Justice Circles when juveniles misbehave instead of other punitive responses, such as suspension.

“Natasha was nominated because of her major contributions to a program to restore voting rights to disenfranchised Kansas,” McCullough said.

Natasha founded the Washburn League of Women Voters, which registered over 400 students.

At the Peace Party, Chris Hamilton, professor of political science, introduced Martinez, who accepted the award from Sharon Sullivan, professor of theatre and TCPJ board chair.

“My goal is that every citizen who wants to vote in the next election is able to have the opportunity without restrictions,” Martinez said.

Martinez created a video in both English and Spanish on how to register to vote that was distributed alongside a lesson plan.

“Voting is important because it gives citizens a right to have a voice,” said Martinez.

Martinez plans on attending law school in just a few years. She is a member of the Alpha Phi Sorority, the Leadership Institute, Washburn’s League of Women Voters and the Campus Activities Board.