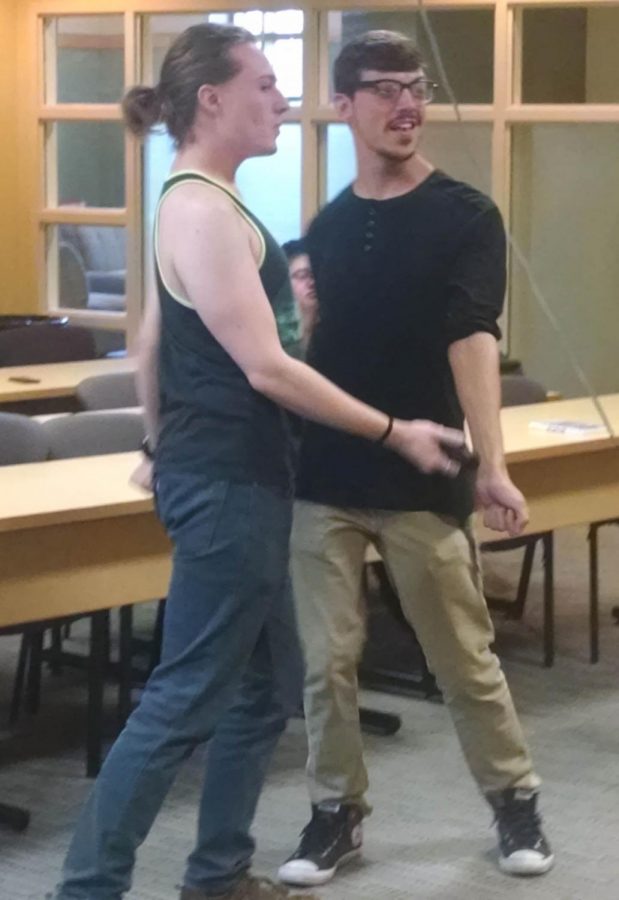 Ichabods danced the night away with the Washburn Players August 26 at the Blair Room in the Living Learning Center.

Washburn’s theatre club, the Washburn Players, hosted a dance party to promote their organization and get fellow Ichabods out of their comfort zones. Washburn Players member Darria Dennison, junior theatre and mass media major, felt the event was well within the “spirit of theatricality.”

Students were invited to play “Just Dance 2016” on the Wii, a dancing game in which players try to match routines, mostly to pop music by the likes of Ellie Goulding, Lady Gaga and the Black Eyed Peas. The soundtrack offered some variety, as two participants danced to Rossini’s “William Tell Overture” and others danced to “Under the Sea” from Disney’s “The Little Mermaid.” Washburn Players provided free cookies to ensure participants had sufficient calories to burn.

“Just Dance 2016” was chosen in part for its accessibility.

“Before school started, the officers had some meetings to plan out what we wanted to do during the year,” Dennison said. “We were trying to think of events that would bring people in, like a common name, something fun that a lot of people knew about. ‘Just Dance’ came to mind first and foremost because everybody’s in the same spot and it’s a pretty familiar game.”

Several actors and a number of students outside of the theatre department attended the event, including freshmen looking to break the ice with their new classmates.

“It seems like a really good way to get to know more people,” said Joshua Griffin, freshman music education major. “I’m mainly in the band program and I didn’t know the theater club was holding this event. It seems really cool.”

The organization and their events are open to all majors.

“You don’t have to do theatre,” Dennison said. “Anybody who shares or fosters a love of theatre can be a part of our group.”

Plans for future events include stage combat and dance workshops. The first meeting of the semester for Washburn Players is Aug. 31, 6 to 7 p.m. in the theatre lobby in Garvey Fine Arts Center.

The Washburn theatre department is putting on two productions this fall, “The Turn of the Screw” starting Sept. 8 and “Gross Indecency: The Three Trials of Oscar Wilde” starting Nov. 4.