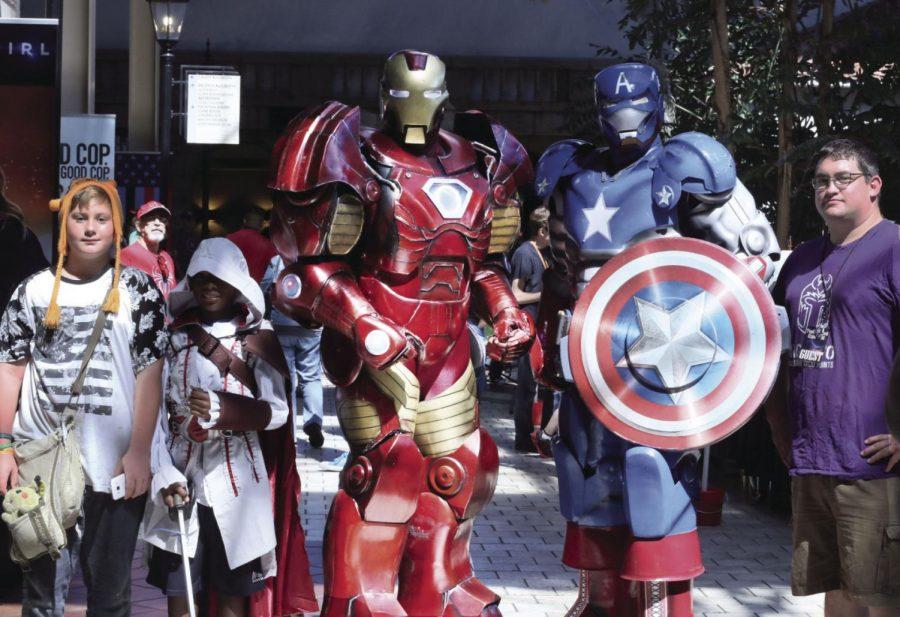 Larger Than Life: Iron Man and Captain America gather a crowd to take a picture with, including participants in the cosplay contest. The Iron Brothers of Topeka have made an appearance at Topcon every year since its debut, selling pictures and interacting with the crowd.

The third annual Topeka Convention returned with gaming, art, comics, cosplay and vendors – and a plethora of new and famous faces – from Sept. 16 to 18 at the Ramada Topeka Downtown Hotel & Convention Center.

Door admission for Friday or Sunday was $7 and Saturday was $14 for adults. Three day passes were available, and events, as well as appearances by famous actors and artists were different each day.

2016 Topcon put an emphasis on the 50th anniversary of Star Trek and introduced a group of actors and actresses never before seen at the convention. These included Greg Peters, the creator of Pinkie and the Brain, Timon and Pumba, and the Animaniac cartoons; Patrick Barnitt, an actor in multiple films in the Star Trek series; Noelle Hannibal, an actress in the series Buffy the Vampire Slayer, Star Trek:First Contact and Star Trek:Voyager; and Spencer Wilding, an actor in Guardians of the Galaxy and the Harry Potter movie series.

These actors and artists were available for signatures, pictures and to feature original work and drawings to be sold to the public.

Some completed series by previous authors returned to be sold in sets.

The convention utilized many rooms in the Ramada, including the main floor and the lower level for educational panels. The topics covered in the panels ranged from how to pull off a cosplay of the opposite gender, to how to better publish your work, all held by experienced cosplayers, authors and artists.

Each year panels are changed and participants are able to suggest which panels they would like to see for the next year.

A cosplay contest was on Sunday in the lower level of the Ramada and had many returning characters as well as first time cosplayers. All ages were welcome to participate. A new staff for cosplay judging was brought in, including Nikki Blackburn, a cosplayer and Extra Life participant to raise money for local Topeka childrens hospitals.

“I had a great time at Topcon,” Blackburn said. “I was able to judge my first costume contest and was able to help make a kids birthday wishes come true with some great people. It was a fun weekend filled with friends and new experiences!”

Returning cosplayers sought to outdo previous performances with loud music, more colorful costumes and interacting with the crowd. Red Dalek returned and pestered the crowd and the Iron Brothers of Topeka walked around playing music and posing for pictures. Each year new cosplayers appear to give tips and table for the companies they came to represent.

KC Brick Lab and Jane Doe Nerdgasms tabled near the entrance with their handmade products and crowd interaction. Brick Lab invited families to come and see their Lego city, featuring super heroes and villains as well as lone pieces made to purchase. KC Brick Lab is a returning staple of the convention, and normally draws a crowd.

A new feature of the event was a cosplay karaoke. Hosts of the event as well as cosplayers of all ages lined up to sing in front of an audience. Participants could play music from favorite games as well as many other crowd favorites.

Games were set up by the returning vendor Warpzone Retroplex, who sets up retro video games for participants to challenge each other in. Top scores are posted on a board above the games and gamers are asked to pay to try to beat a score and have their name featured on the board. Duck Hunt and Punch-Out!! are some crowd favorites. The games encouraged families to come try out their luck at some of the older games that younger children may not be accustomed to.

The Kid Zone room sported drawing sections and crafts that were comic and super hero based.

Marton’s painting station, representing Aunt Nancy’s Face Art, offered hypoallergenic paints for a base price of $7. It gathered a line of mainly adults, wanting to add paint as a part of their costume. Full-face paint, arm sleeves and body paint was offered.