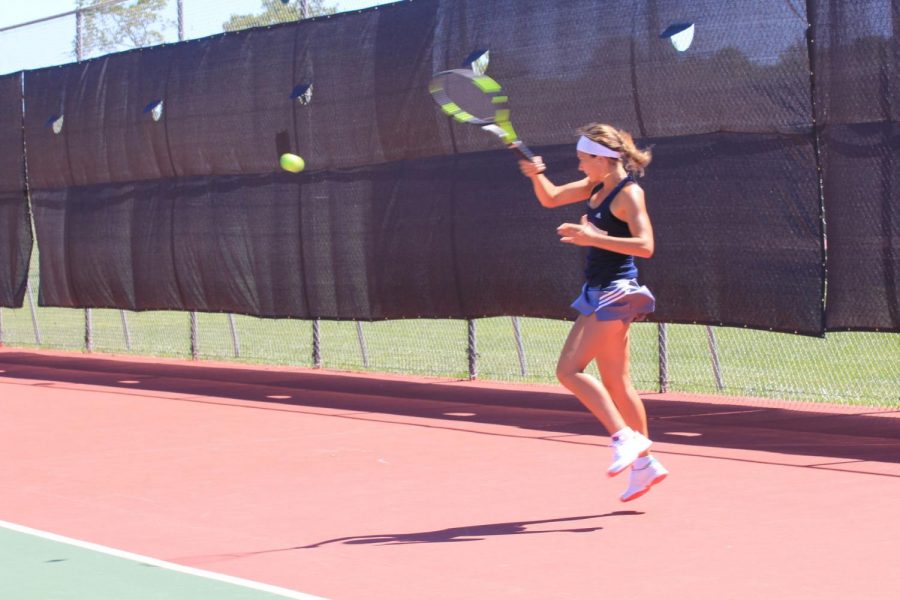 Volley: Logan Morrissey went to the semi-finals of the B flight with an intense volley match before falling to the other team.

Coming out of the Wheatstate Fall Classic with strong records, the Washburn men’s and women’s tennis teams are looking to give the competition a run for their money.

The Washburn tennis teams competed in the Wheatstate Fall Classic Sept. 10 and 11. The men competed at Rock Chalk Park and put up a singles title as well as two doubles flight victories, while the women stole the show at Kossover Tennis Center with two singles flight victories and all three doubles titles.

On the men’s side, freshman German exchange student Paul Haase met team Captain Matt Barlow in the singles B flight championships, where the two decided not to play and just take the title in the name of Washburn. As doubles partners, the two went on to win the B flight while Trey Horton and Brett White won the C flight.

Doubles team Blake Hunter and Alejandro Valarezo Plaza only reached the semi-finals in the A flight despite their usual spotlight performances.

“Our team played pretty well, but we definitely have a long ways to go,” Hunter said. “I played okay, in doubles I struggled a little bit, especially the first day. We were certainly more there the second day with a lot more energy. We have a lot of good players coming in, so I know we’re going to have a great season.”

Typically, the men’s team puts up stronger records, but the women stole the show over the weekend with more titles.

“The guys have a new team so they are still getting to know each other. Their chemistry is good but it’s not great yet,” said Lance Lysaught, coach of Washburn’s tennis program. “You also have the situation where we are playing a lot of tournaments early in the year when these guys really like playing duels. There’s a lot of energy in the duels whereas the tournaments you get split up amongst a variety of courts.”

Despite the hurdles of invitational play however, Lysaught looks toward the future with more intense match ups.

“We’re really trying to get prepared for the ITA that’s here in three weeks,” Lysaught said. “We had Alejandro and Blake get to the finals of that last year and almost win it so we really think we can do well on both the men’s and women’s side of the ITA.”

When talking about chemistry however, it’s hard not to acknowledge the elephant in the room that only two of the women’s team members are returning players, the rest are brand new.

“The women’s team, I tell you what, challenging group,” Lysaught said. “The group is excited to be together, they seem to like each other so the relationships are great so far. They were 20-0 on the first day of the weekend and then in the finals we won all three doubles flights and two of the singles flights. I’m always looking for great things from them. They are so excited to be at Washburn.”

The team returns to competition with a match against William Jewel Sept. 21, after holding their annual alumni match at family day Sept. 17, prior to the home football game.