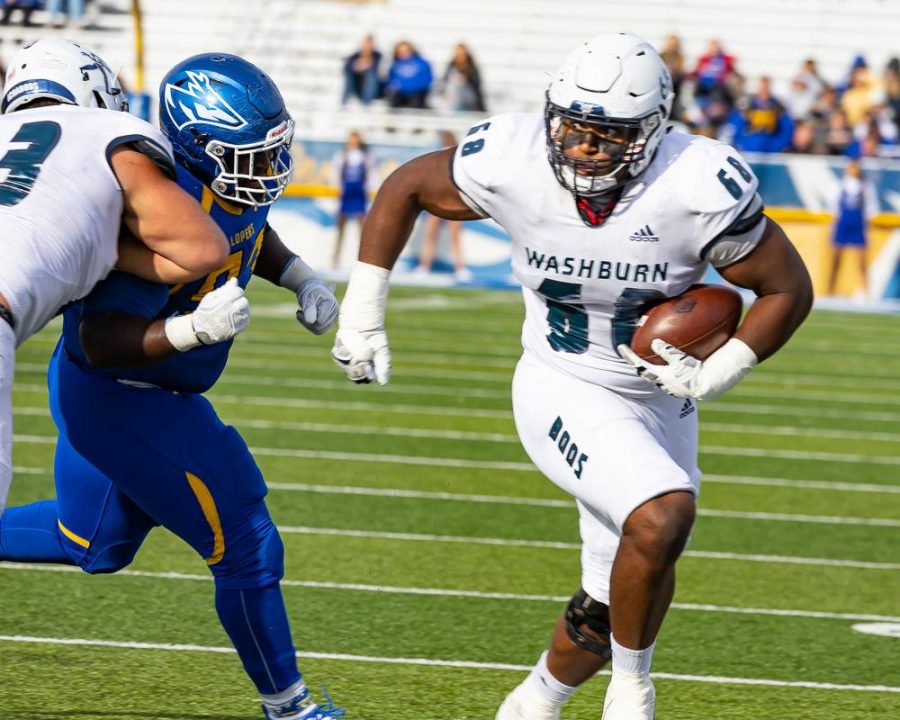 Touchdown: Senior offensive lineman Kyle Hinton makes a catch and a touchdown against the Lopers. Hinton has taken recent snaps at tight end.

Washburn offensive lineman Kyle Hinton received a call Saturday. It was from the Minnesota Vikings staff informing him that the organization had plans to select him in the seventh round of the NFL Draft.

It was just a matter of minutes and what Hinton had heard on the phone came true.

“We were watching from the fourth round on – my agent kept me informed. It was a surprise when the Vikings came calling towards the later picks,” said Hinton in an online press conference Sunday. “It was a great day.”

It has been a long journey for the senior offensive lineman. Signed by Washburn University out of Peoria, Arizona, where Hinton attended high school.

Today, Hinton continues to put in the work, recently constructing a “makeshift gym” outside.

“I’ve been doing deadlifts,” said Hinton. “We have rubber bands that we use for back exercises.”

The selection is a testament to Hinton’s work ethic, coming from a small Division II school.

“[Drafting] me as someone who is coming from a small school – I can’t wait to get up there and get to work,” said Hinton.

It was apparent the Vikings had interest since the start of Hinton’s senior season at Washburn.

“They came out to the university twice during the season in October and November,” said Hinton. “They were interested throughout the entire process. They were the top team interested in me.”

Hinton’s selection, pick 253, was three picks before the conclusion of the draft – but the offensive lineman did not sweat it.

“I had faith that the process would work out for me,” said Hinton.

The next steps for Hinton include learning the Minnesota Vikings offensive scheme and participating in virtual rookie mini camp.

“I’m ready to get into that system and contribute in any way that I can,” said Hinton. “There’s only so much we can do obviously [with COVID-19]. I’m going to make the most of it. I’ll do whatever it takes to get on the field.”

Additionally, Hinton participated in track and field at Washburn. Hinting at the offensive guard’s agility as a lineman.

That anomaly with a combination of power and agility was utilized when Hinton occasionally lined up as a tight end throughout his senior season.

It appears the Vikings will likely use Hinton up front.

“Seems like they want me in as a guard or center. Be able to put me in there as a swingman,” said Hinton.

Head Coach Craig Schurig had a few words on what makes Hinton special, alluding to a coach’s realization of a player’s talent just moments after he steps out onto the practice field.

“You can’t practice any better than Kyle Hinton does – it’s impossible,” said Schurig. “He brings enthusiasm, joy, toughness, physicalness… and you cannot evaluate that until you get him onto the practice field [and see it for yourself].”

Hinton joins New York Giants Cornerback Corey Ballentine as the Ichabods have had two players get drafted in back-to-back years of the NFL Draft.

Hinton is the seventh Washburn player to be drafted and just the second offensive lineman in the school’s history to have accomplished the honor.

Hinton’s highlights from his Washburn career can be viewed below.

Washburn Student Media wishes Hinton the best as he adjusts to his NFL career.