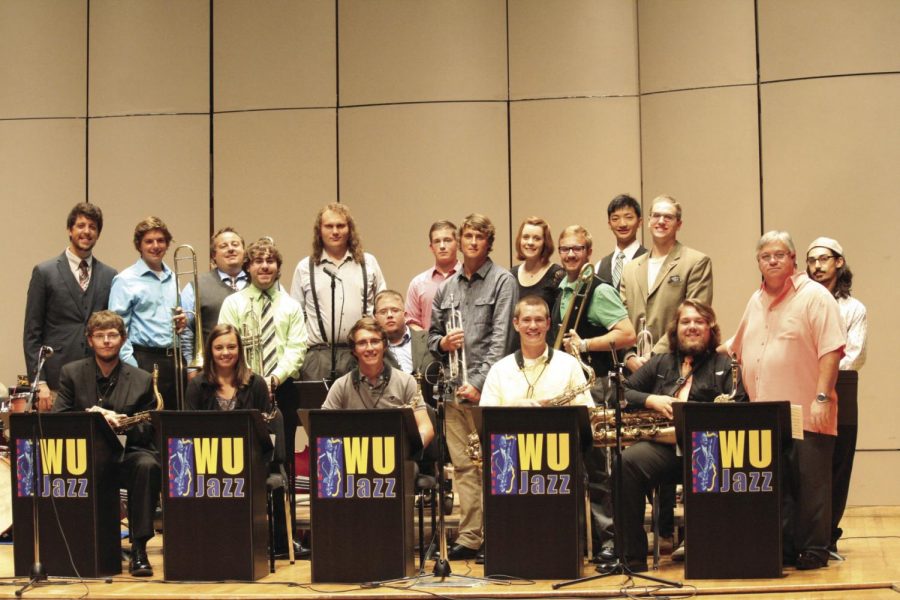 Aficionados: The Washburn University Jazz Orchestra is filled with both newcomers and familiar faces, but one thing is for sure. They've got style and they've got talent.

Craig Treinen and Tom Morgan are the men responsible for gathering the talented students that make up the three ensembles that performed Tuesday night Oct. 4 in White Concert Hall. While the talented men who direct the groups are paramount to their success the students behind the microphones are just as important.

The first performers of the night were the Washburn University Concert Jazz Ensemble. The group opened with a powerful rendition of Mark Taylor’s “Blues For You.” It was the followup piece that really struck a chord with audience members though. “Filthy McNasty,” an infamous hardbop piece from Horace Silver, was filled with improvisational talent from several members.

Morgan is the director of percussion studies at Washburn and he is dedicated to helping students find the value in jazz and improvisation.

“The vocal jazz group is open to both non-majors and majors alike,” Morgan said. “We currently have one non-major in the group.”

When he chose to do an arrangement of Turrentine’s “Sugar,” he did it because of its improvisational nature.

“Scat started when vocalists wanted to mimic the nature of a horn’s sound when improvising in a jazz song,” Morgan said. “Vocal improvisation has become a lost art. I want to help students learn how to bring some new life into music and into scatting.”

Demarcus Kelley was the solo vocalist on the piece and presented her improvisation talents to the audience.

“She has a lot of potential,” Morgan said. “I can see her really being outstanding. She’s a natural.”

The final group performing that night was the Washburn University Jazz Orchestra. Opening with the explosive “St. Thomas” by Sonny Rollins the group shot out of the gate and never stopped in their excitement to perform. The jamming bass of “Cyclops” by Nat Adderly had the audience bouncing in their seats.

The most intriguing piece of the night was Antonio J. Garcia’s “I Mean Monk.” Garcia has gathered more than 20 songs from the famed jazz composer Thelonious Monk and gathered them into an exciting and dynamic compilation piece. Treinen, the groups director, urged the audience to try to identify the numerous amount of songs within the one piece.

The audience was ecstatic with the ensemble and gave a standing ovation to the talented performers of the night. The next jazz concert will be at 7:30 p.m. Dec. 1, 2016 at White Concert Hall.