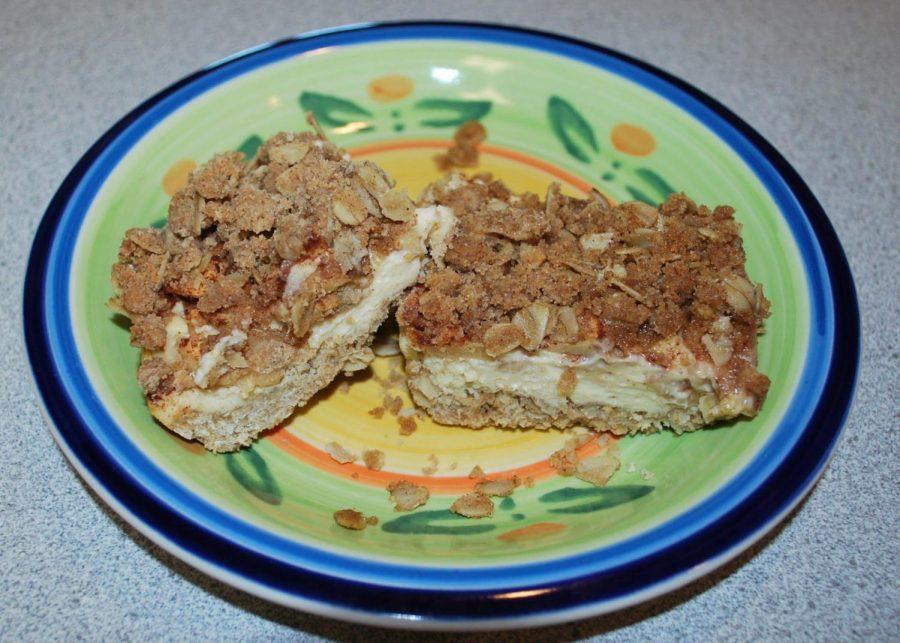 Apple of My Eye: With a layer of crust, cheesecake, apples and streusel, these Apple Crisp Cheesecake Bars are everything you need for a fun gathering. This fall dessert pairs well with spiced apple cider or a mug of hot tea.

This month’s theme is devoted to classic autumn flavors. My favorites are apple, pumpkin or candy corn when I’m feeling more creative. For this recipe, I opted for an apple theme.

Recently, I went to the farmer’s market and bought a bundle of Gala apples. I used a few by making an apple crumb pie. I still had some leftover and decided to get out of my comfort zone and attempt apple crisp cheesecake bars for the first time.

I wanted to cut out some of the junk so it didn’t completely undo my weekly work out. To do so, I adapted this recipe from three others, despite seeing some great recipes on Pinterest, to make sure this recipe was the healthiest it could be while remaining subtly sweet and tasty. I used white whole wheat flour and reduced fat cream cheese, for starters. This recipe could not be made sugar-free, but everyone deserves a treat.

The bars are easy to make, the most time consuming part being peeling and cutting the apples. The recipe list looks lengthy, but the same ingredients are used for both the crust and streusel, just different amounts. The process is mostly mixing the ingredients in one bowl (you can use the same bowl for three of the four layers, and don’t have to clean it out until the end) and pouring them in the pan.

Preheat oven to 350 degrees. Spray a 9×13” pan with cooking spray. Set aside.
In a medium bowl, combine crust ingredients. Pour into pan then use your hands to firmly press mixture against the bottom of the pan. Bake for 10-15 minutes. Remove from oven and set aside.
While crust is baking, prepare cheesecake. With an electric mixer on medium speed, beat until smooth: cream cheese, brown sugar, granulated sugar and vanilla. Reduce speed to low and add eggs, one at a time, until smooth. Do not overmix. Pour cheesecake over crust. Set aside.
Combine sliced apples and cinnamon in a small mixing bowl. Evenly layer apple mixture over the cheesecake layer.
For streusel, combine in a medium bowl: oats, flour, brown sugar and cinnamon. Use your hands to incorporate coconut oil until mixture is crumbly. Sprinkle over apple layer.
Bake for 25-30 minutes or until center is firm and apples are soft. Remove from oven and let cool at room temperature for about 1 hour. After cooling, cover and refrigerate at least 1 hour before cutting and serving. Cover and store leftovers in the fridge.