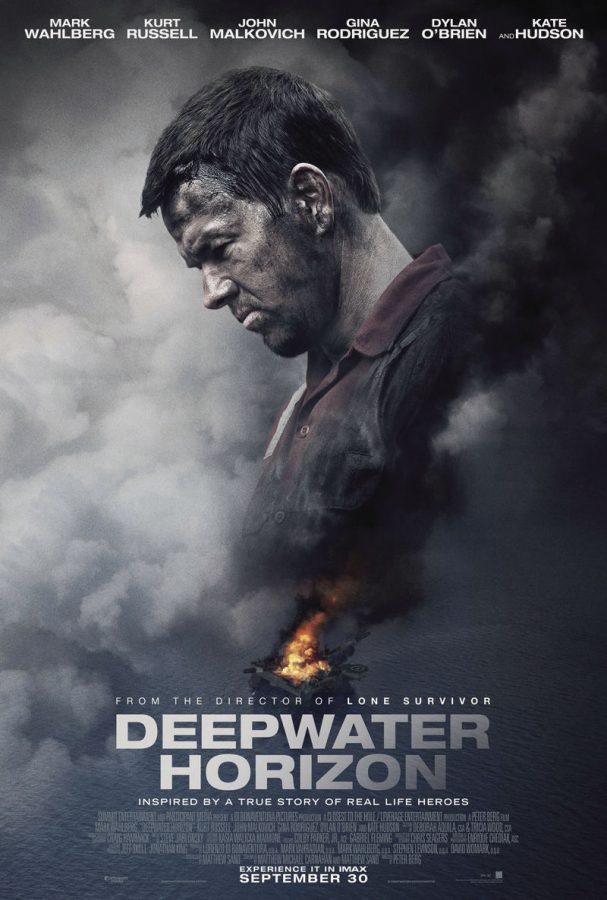 Mark Wahlberg is commonly known for his comedic films, such as the “Ted” franchise. Wahlberg recently wrapped up production on his next drama, “Patriots Day,” which will dramatize the events of the 2013 Boston Marathon Bombing.

“Deepwater Horizon” is a remarkable thriller to kick off awards season.

Based on the real life environmental disastor, the story is set in 2010 and follows the events of the Deepwater Horizon oil rig explosion. The accident spilled over 200 million gallons of unrefined oil into the Gulf of Mexico. The film parallels these events as afterwards, Mike Williams (Mark Wahlberg) and Caleb Holloway (Dylan O’Brien) lead the stranded and surviving crew in the hopes of containing the damage and surviving the disaster.

The real life event this film is based on (referred to as the “BP oil spill,” as British Petroleum owned the rig) has gone down as the most devastating oil spill in US history.

The film, directed by Peter Berg (who also directed “Friday Night Lights” and “Lone Survivor”), explores the lives of the crew, examines what went wrong that fateful day and explains the lasting environmental and economic fallout of the accident. The final product is simply sensational.

With the haunting opening shots overlaid with a voiceover from the real-life Williams, Berg sets into motion a sense of unease that never loses momentum. Even with moments of levity that couldn’t feel more natural if they tried, the tension never wavers, building with unbearable precision until it literally blows up in the crew’s faces. The ensuing fight for survival is nothing short of horrifying. The massive fire nearly spills into the theater. Some of the crew’s worst injuries as they fight their way through the flaming debris, push the PG-13 rating to its breaking point. Berg’s camera is at once both grandly sweeping and intensely intimate, brilliantly showcasing the sheer scale of the disaster without skimping on the lives of those on board.

It helps that the cast couldn’t be more up to the challenge. Wahlberg is at the top of his game here, possibly giving his best performance to date as a dutiful father and loyal worker. He effortlessly conveys his character’s heroism and vulnerability, making his actions that much more effective. As always, Kurt Russell is no slouch either, playing the blue-collared veteran boss as only he knows how. I’d follow his Jimmy Harrell on any job. Gina Rodriguez and O’Brien both make impressive showings as a navigational officer and a young floorhand, respectively.

It’s the cast that allows “Deepwater Horizon” to work as well as it does. Each and every character is given space to breathe and flourish. These are real people we see onscreen, not simply actors playing them, and every one of them has a firm opinion on the situation leading to the disaster without any belief they may be in the wrong. More impressively, the film never overstays its welcome, clocking in at a brisk 107 minutes with nary an ounce of fat left behind, which only enhances the sense of urgency Berg has so flawlessly established.

“Deepwater Horizon” is non-fiction filmmaking at its finest, a piece of work that functions not only as effective cinema, but as a devastatingly accurate representation of the true life events from which it takes its foundation.