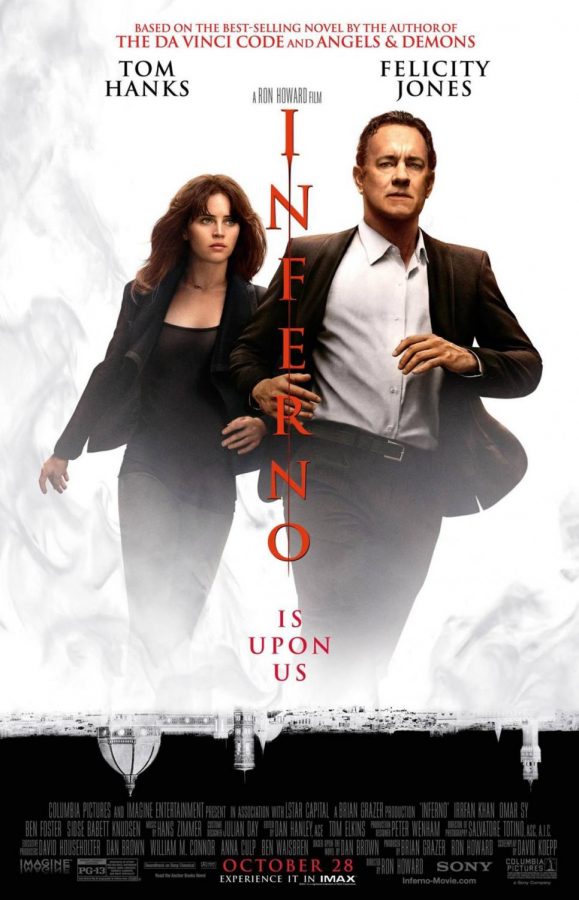 “Inferno” is a breezily paced, yet needlessly convoluted thriller that buckles under its own weight.

When Harvard symbologist, Robert Langdon (Tom Hanks) awakens in a Florence emergency room suffering from fiery hallucinations and no memory of the past 48 hours, he is quickly at the center of a deadly game of cat and mouse between the World Health Organization and a mysterious consortium. Aided by Dr. Sienna Brooks (Felicity Jones), Langdon must rely on his wits to unravel a conspiracy involving a man-made virus that could eradicate the world’s population. The source of the clues? Dante’s manuscript “Inferno.”

It’s been 10 years since Hanks and director Ron Howard first teamed up for an adaptation of Dan Brown’s bestseller, “The Da Vinci Code.” While the film was an unequivocal box office success, it was panned by critics. Their 2009 follow-up, “Angels & Demons,” was deemed an improvement, but still left many cold. Sadly, the third time isn’t the charm for the duo as “Inferno” proves the weakest installment of the trilogy.

With a drastically reduced budget and the loosest structured source material yet, Howard and Hanks, try as they might, never manage to push “Inferno” into memorable territory. “The Da Vinci Code” may have been overlong and exposition-ridden, but at least it allowed its mystery to play out somewhat naturally. To “Inferno’s” credit, the script by David Koepp (“Jurassic Park”) does some serious heavy lifting to streamline Brown’s conspiracy into something more functional, but it merely amounts to the time passing a little faster. It doesn’t help that the mystery itself lacks any real drive, ultimately devolving into a glorified wild goose chase.

The performances are much better. Tom Hanks has never been one to phone it in and he doesn’t start here. Langdon’s memory problems may force him to rattle off some cringe-worthy jokes occasionally, but Hanks stays committed to the character. However, it’s Felicity Jones who steals the show. Sienna Brooks may be underwritten, not to mention completely betrayed by the film’s third act, but Jones’ performance is simply magnetic, holding the picture together even when it’s at its most ludicrous. Omar Sy and Irrfan Khan make the most of their cardboard characters, with Khan earning the film’s only genuine laughs, and Ben Foster’s antagonist, through limited screen time, makes a compelling case for his point of view.

Speaking of the third act betrayal, it’s here that “Inferno” unfortunately goes off the rails. Without going into spoiler regions, know that a significant change has been made to Brown’s ending, a.k.a., the only great part of the novel. It’s certainly a more cinematic endeavor, not to mention it utilizes Hans Zimmer’s magnificent score beautifully, but it completely undermines key character beats and attempts to turn Robert Langdon into an action hero. These movies have never been known for realism, but even that’s a bit of a stretch.

“Inferno” isn’t a total disaster. It’s beautifully shot and well performed, but it’s unfortunately saddled with source material that simply isn’t ripe for cinematic thrills. It lacks the intriguing puzzles of “Da Vinci” and the sweeping scope of “Angels & Demons.” If you’re a fan of the novel, maybe catch a matinee. Otherwise, this one is best left as a rainy night rental.