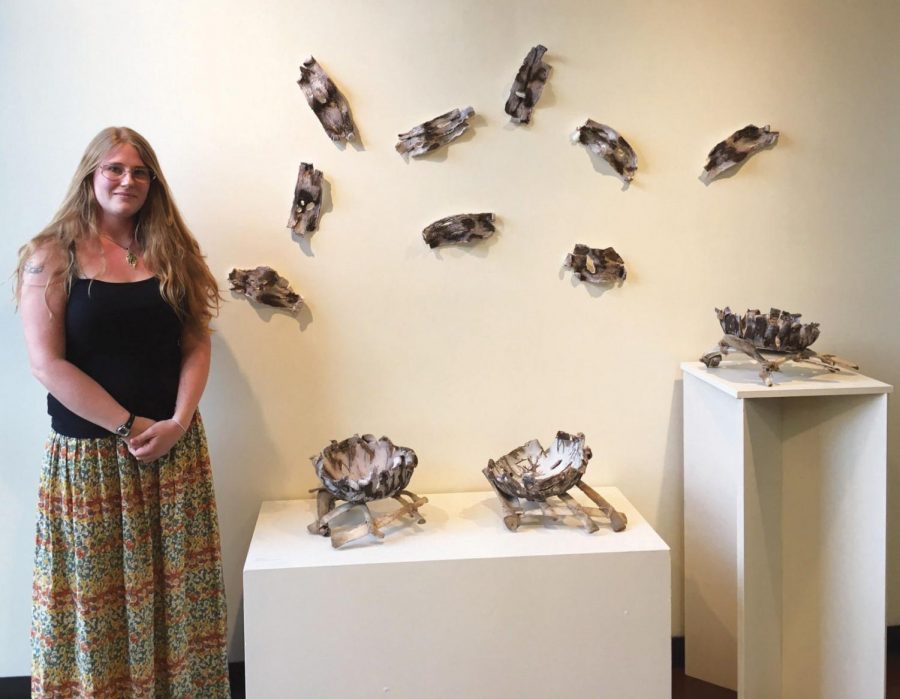 Nothing to fear: Barnes’ exhibition has a heavy focus on death and decay. The pottery adorning the atrium resemble fungi and decomposition. Her piece “Death Bowls” uses a human tool, the bowl, made of decaying matter to illustrate human’s relationship to death.

Washburn’s art building has just received some new decorations thanks to senior art education major Megan Barnes. Her student showcase “Walk on By” is a cavalcade of art dedicated to nature. Walls are covered in detailed and methodical close-ups of fungi, moss, algae and snails. A picture collage dedicates itself to a feather and plant roots placed in captivating symmetry. Cups, vases and teapots have been reformed to resemble the bulbs of toadstools, bark adorned with polypore fungi and tiny barrel cacti respectively. It’s clear Barnes is not simply interested in nature; she is captivated by it.

Barnes chose art education as her major because she believes it is a pivotal component of the education system. “Art gives children a hands-on learning experience, it teaches them problem-solving skills, teaches them higher level thinking in a way that no other subject can touch. It really is the only subject within our curriculum that emphasizes individual development.”

Barnes’ senior exhibition heavily focuses on her own personal philosophy. “I connect most with the natural world because it’s a type of controlled chaos.”

One of the most interesting pieces is “100 Steps” a beautifully and meticulously organized picture series. Taking place entirely on one wall of the exhibition, the collage captures different interesting items from nature. The different pictures have been placed on small, homogenous squares. How they are adorned is the key to the asymmetry of the piece. Much like the name of the piece, the seemingly random assortment of pictures gives the feeling of traveling through a forest, stopping to appreciate all the beautiful hidden gems of the trek.

The piece also places actual pieces of nature on pedestals. Usual items that would be dedicated to the ground have been elevated and put at eye level for visitors to Barnes’ exhibition to appreciate and glorify. The items are captivating and all of them share one thing in common, they no longer have life.

The pale white carcass of a piece of coral and branches of trees that once flourished are now being decomposed by soft green and grey lichens. Their presence along with the general heavy presence of fungi and decomposing creatures, begs the question if death is also a clear motivator in Barnes’ work.

The bookends of the exhibition are beautifully constructed bowls made to resemble natural materials. The first set support plant life and resemble healthy tree bark. The second set is almost identical to the first but has a decayed appearance resembling death. According to Barnes, the exhibition’s focus on death is also very important to her. “Death doesn’t always have to be something that we are afraid of or something that is hideous. It should be something that connects back into the cycle of life.”

“She has Roots and Wings” provides an interesting dynamic. The piece is a photogram, a picture made without the use of a camera, instead using objects on light-sensitive paper and then exposing the layout to light. “Roots and Wings” is a 3×3 grid of plants and their intricate root structures. Barnes places the roots next to feathers. The set, according to Barnes, was part of a self-portrait project. A favorite mug which contains the words “she has roots and wings” was the inspiration for the set of black-and-white photos.

“Walk on By” will be available to view in the Art Department building until Nov. 4.