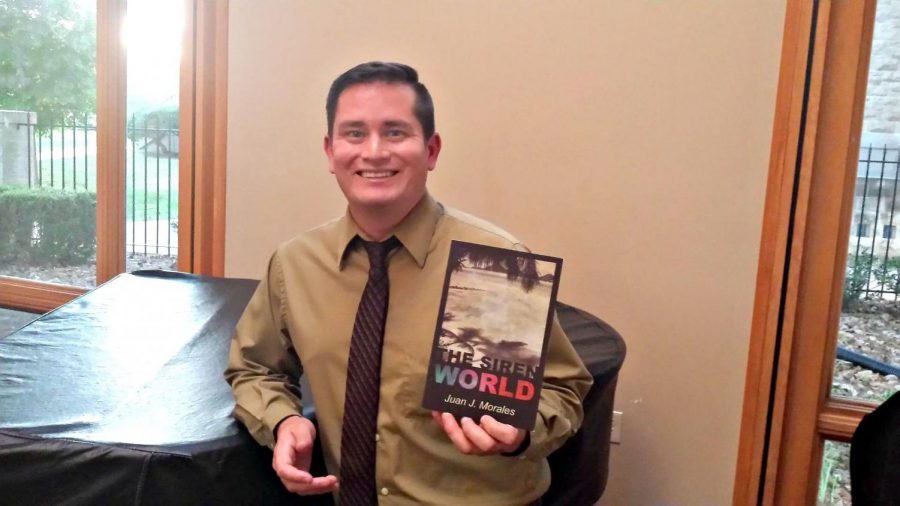 Washburn’s English department got a treat this Monday when renowned poet Juan J. Morales arrived on campus to visit classes and discuss the art of poetry, as well as perform a reading of his work at Carole Chapel.

Morales is a member of CantoMundo, an organization dedicated to the support of Latin poets. Morales’ deep love and pride for his Latino roots is shown through his poetry. In particular, Morales new collection of poetry “The Siren World” has explored the difficulty of his identity through his parents Latin America origins.

“My mother is from Ecuador and my father from Puerto Rico. It’s an amazing part of my culture. These are places with some of the most genuine and friendly people in the world,” Morales declares of the homelands he embraces dearly. A person is a product of the language they speak, the way their parents are and the images they grew up on. Morales is no different.

His early poetry started out as lamentation of his early life. “As a young man I was in a punk-ska band. My early poems were about how no girls wanted to date us,” Morales said. His quirk and humor is likely a product of his upbringing as well. He’s funny to a fault and his work reflects it as well. A notable poem in his vast catalogue tells the story of a tumultuous reaction with a woman at a grocery store who called him Jose. His anger is explosive during the interaction as he begs the woman to understand that “not all Latino’s are named Jose.” When the woman profusely apologizes, the poem apologizes with a small and uniquely funny line: “It’s alright, my middle name is Jose.”

Morales’ friendly and funny disposition shows his love for the people around him. His positivity is staggering. As he introduces a poem about his home of Pueblo, Colorado he realizes that the rest of his state doesn’t envision Pueblo in quite the same way he does. “I believe Pueblo recently was dubbed as the worst Colorado city to live in. It has terrible drug problems and gang problems, but it has a vibrant art community. I’m an adventurous eater, an adventurous writer. Pueblo, to me, is an adventure.”

Morales is an Associate Professor of English at Colorado State University – Pueblo. He directs the Creative Writing Program and curates the SoCo Reading Series. Pueblo’s vibrant art community is an inspiration to Morales and his friends and students are always encouraging him to try new styles. “I have a friend who wants to start writing Hip Hop style poetry. Growing up, Hip-Hop was never a huge influence on me, but it definitely is now,” Morales said.

If there is one thing that motivates Morales, it’s trying new things. His next project is an abstract collection of love, divorce, home improvement and even zombie poems, that Morales boasts as all being connected despite being vastly different. The book is being released in February 2017 under the title “A Handyman’s Guide to the End Times.”