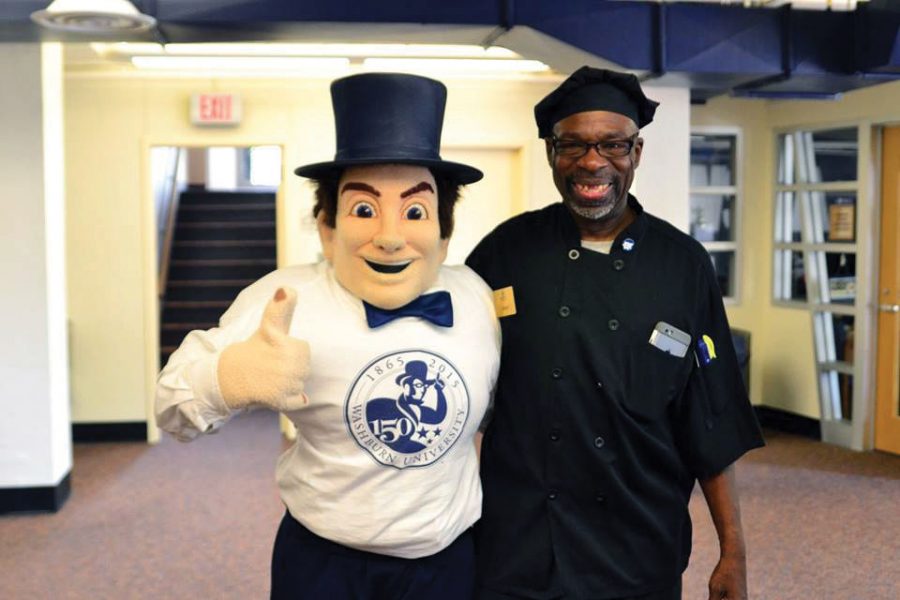 Mr. Blessed: Kenny Cann poses with Mr. Ichabod. Cann passed away on Monday, Nov. 14 in the company of his family and closest friends.

Kenny Cann, a beloved Chartwells’ worker, died on the evening of Monday, Nov. 14.

Cann spent eight years working at Washburn, serving food to students. His dedication to Washburn was shown in 2015, when he won Washburn’s “Muriel D. Clark Student Life Achieving Excellence” award. During this time, he became well-known to students as “Mr. Blessed” or “Kenny the Pasta Guy.” He enjoyed talking with students, staff and faculty, and always finished a conversation with an exclamation of “have a blessed day!”

Cann was diagnosed with throat cancer, which then spread to his liver. After receiving these diagnoses, Cann decided to go back to his home state of South Carolina to be with his family. He came back to Washburn for a homecoming ceremony Oct. 28 in the Memorial Union.

Multiple Washburn students expressed their blessings towards getting to know Cann.

“Whenever I would ask him how he was, he would invariably reply ‘Blessed, as always,’” said Jack Williamson, sophomore. “His unwavering positivity, charisma, faith and hope were models and inspirations to anyone and everyone he spoke to.”

Indigo Wilson-Schmidt, a junior English major joked about how she felt Kenny loved pasta just as much as she did:

“I’ve always loved pasta, but I never knew that when I came to Washburn I would meet someone even more enthusiastic about pasta than me and that he would always do his best to make everyone smile. Kenny the Pasta Guy you are absolutely missed and I know without a doubt you’re having a blessed day and we’ll all do all we can do for you.”

Many students have said that Kenny changed their college career, specifically their freshman years, making the transition into college life much easier for them.

“Kenny made my freshman year of college so much better, in so many ways,” said Delainey Combs, sophomore accounting major. “When he saw me, he would always take time out of his day to ask me about school and work. When he visited campus two weeks ago, I went and saw him. He called me a cutie pie and gave me the biggest hug. He told me everything was going to be okay and I know it will be. Today is a very blessed day.”

Senior English major, Laura Wiseman spoke about how Kenny seemed to care about everyone he met, and always remembered them.

“Kenny was a bright and positive person here at Washburn… He never forgot a story you told him and if I told him my plans for the weekend, then Monday at lunch he would ask how my weekend went. I’m so fortunate to have met this wonderful person and he will be very missed here at Washburn by everyone.”

Washburn has said that they will release information about a memorial service when it is available. Until then, in the words of Kenny Cann, have a blessed day.