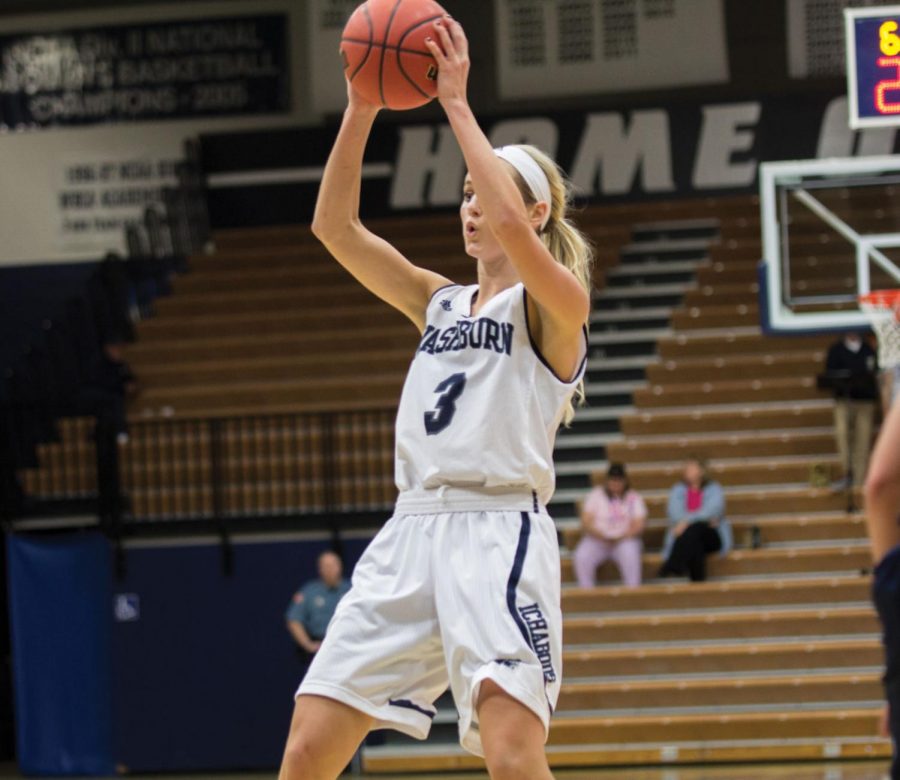 Fade away: Senior Erin Dohnalek goes for a fadeaway shot during Washburn’s game against University of Saint Mary. Dohnalek is a forward and scored a total of five points over the course of the game.

Women’s basketball is already getting into full swing just three games into the season. The team now holds a 2-1 record thanks to their victories over Minot State 77-61 and University of Saint Mary 89-59 over the weekend.

The most recent and pronounced of these games was the one against Saint Mary, Nov. 14, where the women’s team earned a lead on their opponents and never let go. Ending the game with a 30 point lead this early in the season makes a statement about the team’s future games from here on out.

Don’t take the lead over Saint Mary as meaning they were a bunch of push overs either, the Washburn women’s basketball team made 48.6% of all their field goals in that game and Saint Mary only held a lead over Washburn at one point in the game: by exactly one point for nine seconds during the first period.

Reagan Phelan earned her spot at the Saint Mary game as the MVP with her grand total of 28 points in the game off a 6-of-10 field goals, 4-of-6 three pointers and 4-of-4 free throws record. Phelan is a freshman guard from Holyrood, Kansas and it’s evident that she will play a major factor this season.

“I thought we played pretty good in the first half,” said Phelan. “We kind of slowed down in the second, but overall it was a pretty good win for us. It’s a lot of fun [playing for Washburn], I’m just really glad I came to this school.”

While she didn’t break the box score against Saint Mary, senior Erin Dohnalek helped support the backbone of the team alongside fellow senior Erika Lane. Lane was in the game for 23 minutes with 10 total points while Dohnalek was in for 22 with five total points. These two players were on the court the longest compared to everyone but Phelan, helping to drive the ball down the court all throughout the game.

“We definitely could clean up some areas, but other than that I think we played as a team,” said Dohnalek. “I’m really excited to be a senior. It’s more of a leadership role for me and we have some new kids, so I’m just looking to help them out, on the court and off.”

Washburn will play against Drury University Nov. 19 at Lee Arena. Drury is currently undefeated so far, both in and out of their exhibition games. Last year when Washburn played against Drury, Washburn lost the game 66-46.

“I’m very excited for the season and for playing Drury on Saturday,” said Dohnalek. “They are a tough team, but we just need to play smart and stick together.”