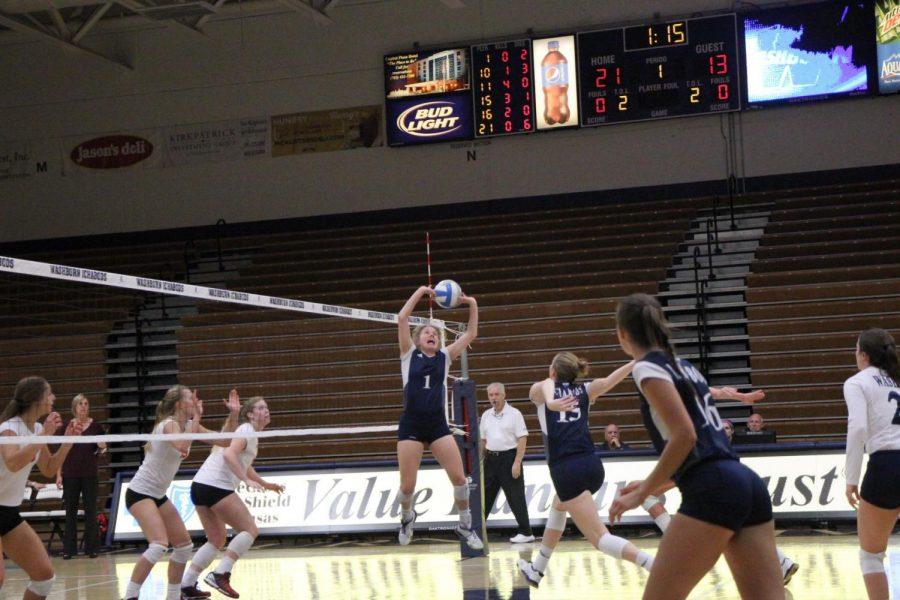 The kill: Senior Natalie Bates setting up the kill at the Pittsburgh State match at Lee Arena

The Washburn Ichabod squad will officially know this day as their senior day. The idea of Washburn losing their leaders in football and volleyball can be a little glum.  However, this emotion is powered by how positive the Ichabods seasons have been going.  Therefore instead of being glum, let’s be proud of our seniors.  Washburn has a football team that is going into today’s game with a record of 7-3.  While also having a positive home record of 4-1. The student-body could not be disappointed about going to these games.  Our women’s volleyball team is going into today’s game with a record of 25-5, as well as playing undefeated at home.  Before today’s match ups the football team is ranked fourth in the MIAA conference and the volleyball team is ranked third.  The final scores of today will determine the upcoming playoff seedings. Today the seniors will be working their tail off to make sure they can advance to the furthest point possible.

So with the talk about senior leadership,  Ichabods can turn their attention to some specific seniors on the volleyball team that have done more than their fair share of work.  By name and position we have Leanna Willer- Outside Hitter, Sarah Vicory- Middle Hitter, Alyssa Carney- Defensive specialist, Callie Lowry- Defensive Specialist, Natalie Bates- Setter.  All of these ladies are ranked somewhere on the court, and accomplished what they have by unrecognized hard-work.  They deserve to be where they are now in the MIAA conference, and Washburn University should be proud to call them Ichabods.

The leadership does not stop there;  on the football team there are a total of 14 seniors.  Five of which have been here since their Freshman year. The road to get them here has been an emotional roller coaster.  Starting out their career here at Washburn 8-3, then the following year 4-7, after that getting to 5-6, and now doing their best to hopefully finish strong with another 8-3 season as they are currently today 7-3.  These are men who have worked hard, earned their season, and have earned their future.  So the football leaders, or should I say seniors are: