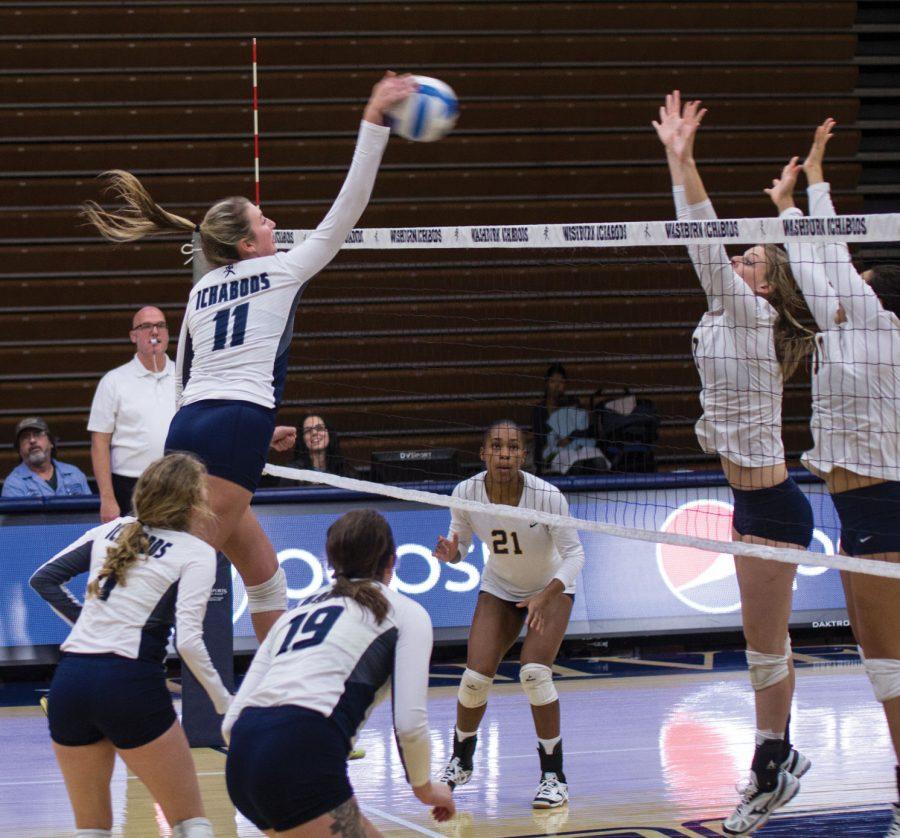 Barrick Kills: sophmore Kelsey Barrick spikes the ball for a kill on an open University of Central Oklahoma. Barrick recorded the most kills in the game at 14, with senior Leanna Willer right behind at 13.

This week the Washburn women’s volleyball team had to prepare to say goodbye to yet another year of seniors who will be graduating. In honor of those seniors, the team won their final two matches of the main season and head into the MIAA championships in the second seed.

This weekend, the volleyball team won 3-0 against Pittsburg State Nov. 11 and 3-1 against University of Central Oklahoma Nov. 12 for senior night. These two home games wound down the main season and displayed the dominance that the team has earned in the MIAA after going 16-2 in the conference. A six game winning streak at the end of the season is something to be proud of.

While the season ended on a high note, and the team likely has many more games to play before they are truly done, the realization that they would be leaving the team was very real for the seniors.

“We don’t really think about it. I don’t know if I’ve really processed it yet,” said Leanna Willer. “We were like ‘no crying, no crying’ before the match. We didn’t want to get all emotional; but it’s weird, it doesn’t feel like it should be over yet. It’s been a good four years and I don’t think I would have wanted to go out with any other senior class.”

Thanks to the action that has kept the team swept up in the idea of competing for the top spot in the MIAA, the seniors haven’t really had time to think about leaving.

“It’s weird being a senior, I feel like I’ve known these girls my whole life,” said Willer. “It’s probably one of the closest teams I’ve been a part of… Washburn volleyball has a really good family atmosphere. We’re all sisters; we’re like our own mini-sorority in a way. Once you graduate you’re just away for a little bit, you’ll always come back.”

Thanks to their victory on senior night, the volleyball team landed themselves just one win behind the top spot of the MIAA, which is currently occupied by Nebraska-Kearney. The team is currently 1-1 against Nebraska-Kearney this season, and if they can manage to make it to the finals and defeat Nebraska-Kearney, then they will end up with a historical season for Washburn.

“Our senior class is pretty close and I think we’ve had a pretty big impact on this program and the younger kids,” said Natalie Bates. “It’s really sad to have it all ending, but this win really helped our momentum to hopefully win the [MIAA] tournament.”

“I don’t think [the fact that it is senior night] has hit me yet, just because I’m still running on a high from the win, but I think it will hit me eventually and it will be sad,” said Sarah Vicory. “It’s going to be really sad to not be around, but I think the team will do a really good job even without us seniors.”

With five very impactful seniors leaving this year, the volleyball team will have holes to fill, but the underclassmen of these prestigious women are already making their marks.

The Ichabods were predicted to win the MIAA tournament in the pre-season coaches’ poll off of their 14-4 conference record last season. The distance that the team has come this season shows itself on the scoreboard, but only time will tell if they have what it takes to pull out the victory in the end.

After tonight’s win over Missouri Western, the thoughts of winning the MIAA tournament look even stronger for the Ichabods. Do not let this win be deceiving though. 2 out of the 3 went to the win by 2 rule. At the same time, we cannot overlook Washburn ability in a high pressured situation.