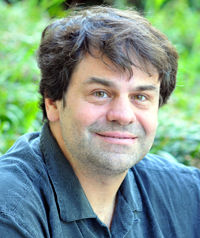 Gaspar Porta is an associate professor of Mathematics and Statistics.

Gaspar Porta, associate professor of mathematics and statistics, presented at an international conference hosted by the World Scientific and Engineering Academy and Society in Rome, Italy.

Math is practical and frequently aids other disciplines, such as computational mechanics, the subject of his presentation.

According to Porta, the field includes anything involving calculations or measurements in a mechanical setting.

His presentation was one of several given by other professional researchers at an invite-only conference. According to Porta, WSEAS hosts a number of conferences throughout the year. The recent conference in Rome was largely concerned with issues in math and engineering.

This year marks the third time the professor attended a WSEAS event and the second time he held the title of chair.

One of his responsibilities was to assess each speaker’s presentation. This duty is particularly challenging since the speakers’ topics vary so greatly. Topics ranged from the strength of screws to the overheating of an accelerator.

The prior conferences he attended took place in the Canary Islands and Prague and were more geared towards math and computer science. Porta was the sole Washburn faculty member to attend the Rome conference and the only American invitee.

Porta was invited to the conference to discuss a paper written by he and a colleague that had to do with systems of articulation.

“Systems of articulation deal with mechanical constructs that have some number of degrees of freedom,” Porta said. “Depending on the number of degrees of freedom, you end up getting something that draws curves in the plane. What this means is that with a machine or a system of linkages that draws curves, you can began conceptualizing the algebraic expression that corresponds to that curve.”

Understanding the corresponding algebraic expression is beneficial, especially for mechanical engineers who need to know how much they can push before breaking occurs. The machine, or system of linkages, that produces curves is more familiar than non-mathematicians may realize.

“Windshield wipers on many vehicles rely on systems of linkages,” Porta said. “The wipers are moved by a little electrical engine and do not always move the same amount. Sometimes, one wiper may be bigger than the other. Any mechanical object that you can think of is going to have pulleys, gears and systems of linkages.”

A system of linkages is a connection of rods and articulations. Articulation, in the mathematical context, refers to a hinge. Given how long the concept of systems of articulation has been around, one fact is particularly interesting.

“There was no [prior] characterization that had ever been recorded or found,” Porta said. “That doesn’t happen very often on a topic that has existed for millennia.”

Still, the professor is quick to point out that while the system of articulation wasn’t documented before he and his colleague’s written contribution on the matter, that doesn’t mean that it had not been previously recognized by earlier scholars.

Although Porta has no more upcoming WSEAS conferences planned, he does have other math projects in the making. One project is related to educational practice. Porta and his colleagues are currently working on what he calls a manipulative with which they can try to teach probability and statistics to 6th to 8th graders.