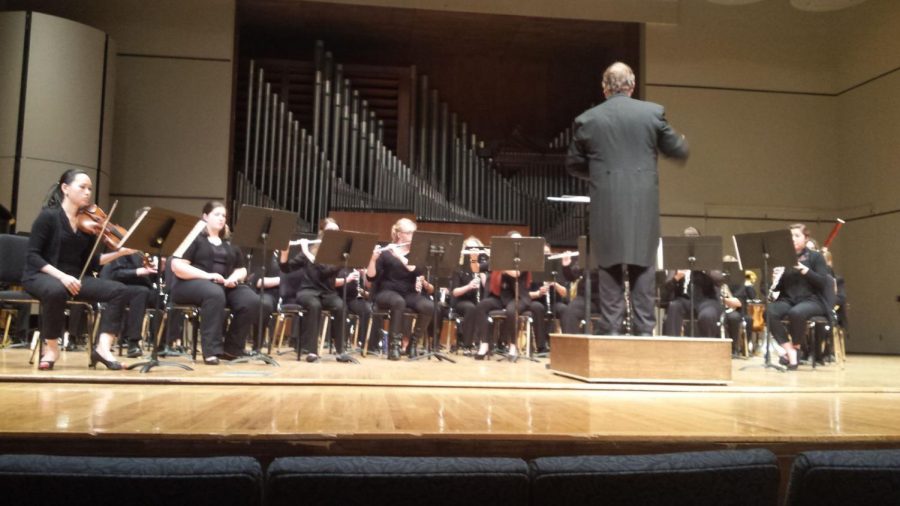 Well Orchestrated: The Washburn Wind Ensemble is currently directed by Dr. Michael Mapp. Officially called the Director of Bands, Mapp also leads the Washburn marching band and pep band. He earned his doctorate of musical arts at the University of Kansas.

“Con Spirito” was the name of the concert that echoed through White Concert Hall Monday, Nov 21. Michael Mapp, conductor of the Washburn University Wind Ensemble, touted the musical performance as a cavalcade of songs based on uplifting the spirit.

The concert mixed religious music from varying world faiths to songs simply based around feelings of love, kindness and elation. Each piece was accompanied by echoing applause and “bravo” by the audience. “Con Spirito” itself was sponsored by the Phi Mu Alpha fraternity, which had a reception after the concert concluded.

Phi Mu Alpha opened the concert by performing “The Star Spangled Banner” for an audience that stood at attention. After the applause settled, the men left and Mapp took the stage.

“Euphoria” was the ensemble’s first piece. Composed by John Frantzen, it is meant to convey a feeling of vibrancy and elation toward life. The music highlighted a carefree nature and an embrace of joy; it’s an excited and uplifting piece that resonated well with the audience.

The ensemble then performed a piece called “Net Luck Soaring,” by Joni Greene. It tells the story of Noppanut Lucksanawichien, called Net Luck by his friends, who was a talented musician in his hometown of Leander, Texas. Luck was diagnosed with a terminal disease but embraced life with an unparalleled voracity. He was described as loving and compassionate and before his death, Greene wrote a piece honoring Net and his family. “Net Luck Soaring” was the result, and according to Greene, “Net Luck is behind every sound in this piece.”

The first piece rooted in religion appeared in the form of “Yiddish Dances,” by Adam Gorb. The piece is five movements, each representing a different style of dance or music in the canon of Yiddish folk music known as Klezmer.

“Khosidl” is a fast-paced party song that is explained by Gorb as “moving freely between satire, sentimentality and pathos.” The piece moved to a full party song with the tango movement “Terkische.”

The most interesting movement was “Doina,” a contemplative piece using several different solos of varying instruments and tempos making for a unique recitative.

“Hora” and “Freylachs” close Gorb’s piece transforming it into a raucous party that had the audience tapping their feet and clapping along.

The ensemble also had the honor of performing the world premiere of Topeka native Robert Johnson’s “Suite for Band,” a piece of varying temporal and harmonic complexity that has a staggering ten movements. Mapp said it was an honor for the ensemble to perform Johnson’s piece for the first time.

The ensemble ended the concert with a piece by David Maslanka called “Give Us This Day.” While the title conjures up feelings of The Lord’s Prayer, Maslanka insists the inspiration is Buddhist.

“Give Us This Day” focuses on the way to obtain world peace, for each person to be mindful of themselves and to become truly awake. According to Maslanka, “’Give us This Day’ gives us this very moment of awakeness and aware aliveness so that we can build a future in the face of a most dangerous and difficult time.”