‘Moonlight’ lands among the stars 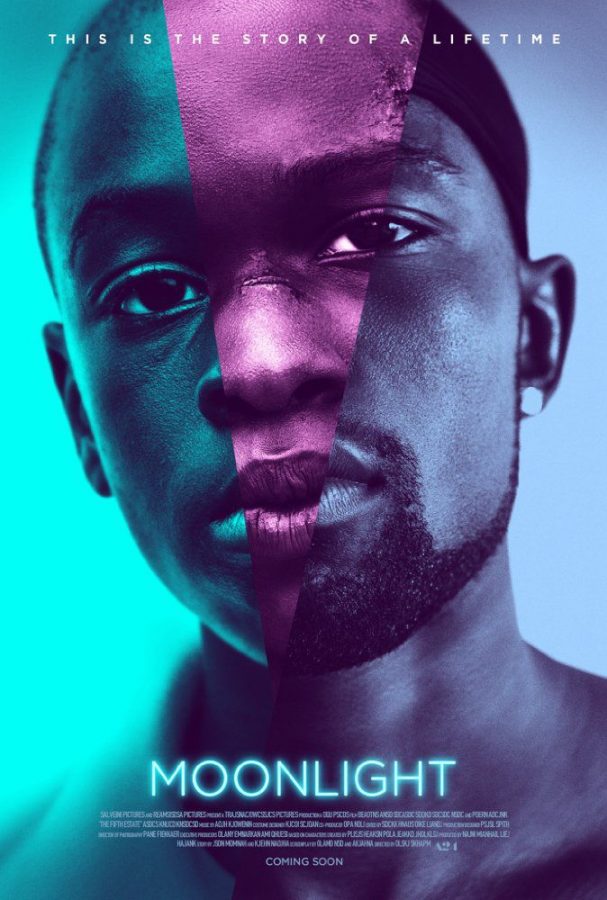 Image courtesy of A24 Entertainment

Flawless films are few and far between.

“Moonlight” chronicles the story of Chiron told through three chapters set 10 years apart. At age 6, he is an impoverished, bullied African American child living in 1990s Miami being mentored by a kind-hearted drug dealer. At age 16, Chiron struggles to cope with his burgeoning sexuality and his mother’s worsening drug addiction. At age 26, he revisits important people from his past to tie up loose ends and blossom into the man he is meant to be.

The task of a reviewer is to look at a film and ask yourself two questions: What is this film trying to be? Did it accomplish that? “Moonlight” did not set out to be an action flick or a comedy. It’s a series of snapshots of important moments that creatively explain the complex, heart-wrenching shaping of a young man into the person he is meant to be. It’s quiet, raw and undeniably clever in its story-telling. When I wasn’t completely engrossed in the drama of Chiron’s every day life, my heart melted over his and his best friend Kevin’s long time friendship.

Moderate spoiler warnings from here on out: This film accomplished what the 2014 “Boyhood” set out to do (chronicle a young man’s life overcoming hardships in a relatable manner), but where “Boyhood” flopped when stripped of its gimmicks, “Moonlight” has moved critics and audiences alike for the honest, awful truth of being poor, black and questioning one’s sexuality, let alone the added stresses of an abusive home live and bullying. This was a story that needed to be told. I don’t mean that in the way that a child must eat their vegetables out of obligation– no. This was a story that needed to flesh out the racial and sexual stigmas and stereotypes that plague Hollywood today. It’s easy to write a kid from the streets with a crack addicted mother, it’s another to humanize both the child and mother, making us truly care for and understand them as their lives fall apart and rebuild. It’s easy to write a stock gay character struggling to come out, it’s another to explore the hyper-masculinity at work in impoverished black communities through an almost sociological lens.

Two technical aspects that worked for me were the color scheme and the music. The everyday colors of ’80s and ’90s Miami are warm, yet muted, reflecting Chiron’s lack of happiness in life. It’s not until the third act that we see a major color shift from those warm oranges, tans and blues, and all of the set pieces become black, red and white, illustrating Chiron’s inner and outer darkness coupled with passion and hope by the close of the film. During scenes of emotional turmoil throughout the three chapters in his life, Chiron and those around him are bathed in neon blue and pink, stark contrasts to every other scene. They demonstrate his split down the middle of what is expected of him and what he actually wants out of life. The music, too, in these dramatic scenes are what sealed the deal for me. As the scenes wind down to slow motion and the neon color scheme bleeds in, the music swells with an emotionally charged string ensemble as we see these pivotal moments through Chiron’s eyes. These visual and auditory choices take the story to the next level of thought-provoking film.

The entire cast was simply phenomenal. Each of the three actors who played Chiron took my breath away for separate reasons. Alex Hibbit showed us Chiron’s shyness, curiosity and capacity for innocent love at age 6. Ashton Sanders gave a truly visceral performance at 16 year old Chiron tried to literally survive high school and home life alike. Trevante Rhodes breathed life into racial and sexual stereotypes as he reaches a pivotal crossroads in his life when Chiron has grown into a complex 26 year old.

This film is not for everyone. You cannot watch this film and turn your brain off, but you won’t leave feeling like you just did homework or as if you’re not smart enough to enjoy it. “Moonlight” is highly accessible and plays with your emotions. I cried for multiple reasons –happiness, shock, anger, frustration– but a handful of scenes as well as the story’s final thirty seconds made my heart swell with love and hope. For what this film set out to become, it is a masterpiece.