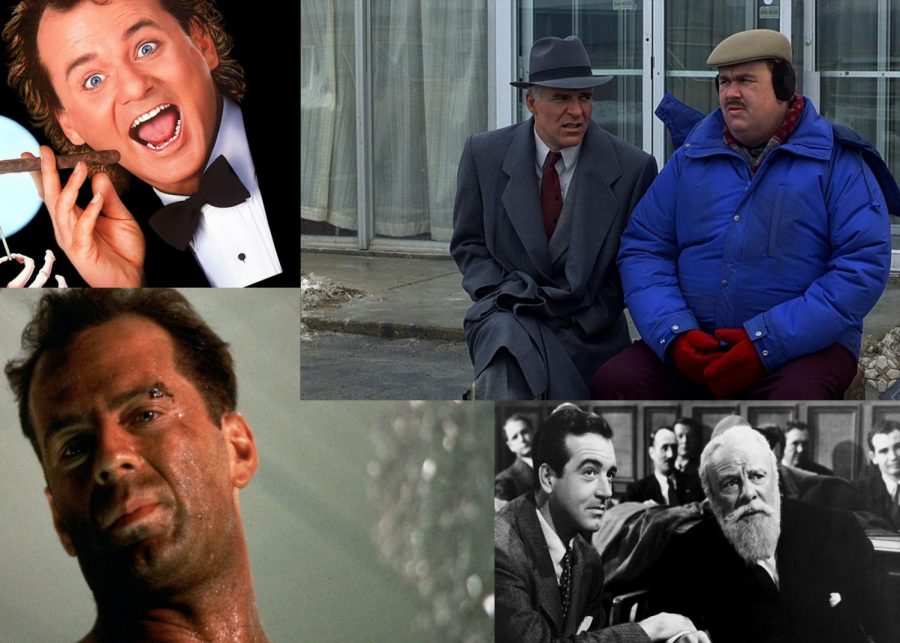 It’s the most wonderful time of the year as they say. Many will gather with family and friends to celebrate another year passed. To remember good times, and to enjoy time with family by eating, sharing gifts and hopefully sitting down around the fire and watching some holiday movies.

For many, watching certain movies during the holiday season is a tradition that you would not dare skip. Perhaps you’re looking for another film to add to your traditional watch. Look no further. Here are ten movies to enjoy with your candy canes, eggnog and roast beast to close out the year.

From the well-known classic to the glaringly unconventional the list has something for every one.

Tired of watching the classics your family watches every year? How about a dark comedy about a mall santa trying to pull off a heist with his elf partner?

We’ve got one of the greatest action movies of all time. One-liners galore.

There’s also a nostalgic classic with loveable characters, some old-timey musicals, and the weirdest adaptation of “A Christmas Carol” you can find out there.

Starring Bill Murray, the film uses a modern setting to tell the classic “A Christmas Carol.” It’s certainly not the best adaptation of the story, but its humorous and classic Murray dead-pan. It makes for a unique and fun addition to your holiday watch list.

Unable to find joy in the upcoming Christmas holiday Charlie Brown takes on the task of directing the school play but finds resistance at every turn. Eventually Charlie is able to find the true meaning of Christmas.

When it comes to animated Christmas movies there’s only one to turn to in my opinion. “A Charlie Brown Christmas”is the Peanuts gang at its best.

Its animation is quaint, its jokes are funny, and its moments iconic.

It has amazing music as well. Vincent Guaraldi’s arrangements of classic Christmas carols have become so prolific they are a permanent part of the Christmas music canon.

There’s something pure and lovable about the Peanuts cast that makes the film so iconic and it’s a treat to watch whenever Christmas comes around.

Del and Neal Page, a true odd pairing, find themselves unwillingly forced to help the other get home for the holidays.

It’s a heartfelt movie about the warming presence of an unlikely friend as well as appreciating the kindness of strangers. If you haven’t seen it correct that mistake.

Buddy isn’t your ordinary elf. When santa visited his orphanage Buddy stowed away in his sack of toys. Buddy was raised by the village of elves at the North Pole, unaware of his heritage until reaching adulthood. Now a full-grown human man, Buddy travels to New York City in search of his real father and realizes just how different elf-life is from the human world.

“Elf” is a favorite among the younger generation of movie-lovers.

Will Ferrell’s character of Buddy is one of the funniest and most uplifting characters in the holiday movie genre. Some might be tired of “Elf” but that doesn’t make it any less of an enjoyable and funny ride that will lift your Christmas spirits.

Not to mention its endless barrage of quotable lines. “You sit on a throne of lies!”

You’re sure to get a kick out of this Christmas comedy classic.

Career criminals Willie and Marcus disguise themselves as Santa and his elf to rob mall stores at night.

Some people get tired of watching all the family-friendly holiday movies. Look no farther than the excellent “Bad Santa.” The movie is sure to give adults a fun escape from all the kid-friendly movies they’re usually forced to watch.

A musical classic that is known for its abundance of classic and beloved Christmas Carols. Even still, it boasts some hilarious sequences as well as a heartwarming love story that focuses on romantic love as well as brotherly love. The movie is known for its beautiful colors and amazing music which is competently handled by well-known musical talents. The crooning lounge voices of Bing Crosby and Rosemary Clooney will be sure to put your heart in a warm, fuzzy, Christmas feeling. Danny Kaye and Vera-Ellen’s well-known vaudeville style of performance will have your sides splitting. It’s one of the best musical’s out there, and certainly the best Christmas musical.

Christmas seems to have lost its meaning for the citizens of New York until one day a man claiming to be the real Santa Clause applies at Macy’s.

The 1947 or 1994 version? Why not both? The original ’54 version with Maureen O’Hara and Edmund Green is a classic. No matter which version you choose, “Miracle on 34th Street” is an unusually fun Christmas film set against the backdrop of a courtroom drama.

When George Bailey decides his average life isn’t worth living, a guardian angel named Clarence shows him what life would be like if he had never been born.

A classic in every sense of the word. Beautifully captured, heartwarmingly kind and wonderfully acted. It’s a touching movie about how everyone’s life has value. It’s visuals are weak compared to today’s standards, but its story and characters are what keep fans coming back. It moves from incredibly comedic to hauntingly dramatic to create a movie that is the epitome of an emotional roller coaster.

The travels of George Bailey and Clarence Odbody through an alternate universe makes for a fantastic and thrilling ride that culminates in a beautiful and wise ending that transcends across the sentiments of many generations.

While at an office Christmas party, officer McClane must fend off highly-trained thieves from robbing the party.

“Die Hard” is anything but traditional when it comes to someone’s expectations of what a holiday film is. Its well-crafted script, great characters, and amazing action beats make “Die Hard” a movie one should watch every single Christmas.

Ralphie Parker’s quest for a Red Rider BB Gun is shot down at every turn by his parents, mall santas and his teachers. While all this is going on he is trying to fend off the bullies at school who won’t stop taunting him.

Jean Shephard’s semi-biographical account of young Ralphie Parker has some of the most memorable Christmas scenes of any movie. Flick’s tongue stuck on the icy flag pole, The Old Man receiving his fishnet stocking leg in the mail, and a department mall Santa telling Ralphie he’ll shoot his eye out if he gets a BB gun.

It’s a story of hilarious and loveable vignettes that have become so engrained in American holiday culture that they are inescapable. “A Christmas Story” is so culturally relevant that it is more than just a movie, it’s a staple of Americanism in general.