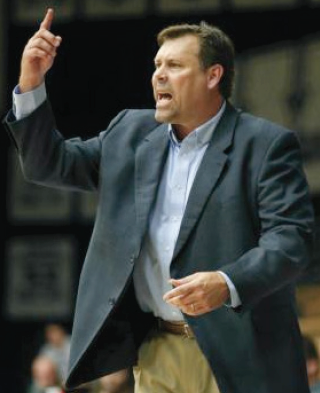 The St. Louis Rams were Super Bowl champions. The hit movie “Gladiator” arrived in theaters. Shaquille O’Neal was NBA Finals MVP and rapper Eminem released his third album. George W. Bush became President of the United States after a controversial election. In 2000, Ron McHenry was appointed as the head coach.

Ron McHenry previously attended Washburn from 1983 to 1984 and played on the school’s basketball team. McHenry soared through the ranks of coaching after his education. He has made plenty of stops at the high school and college level, even coaching for the Topeka Sizzlers of the Continental Basketball Association. He came back to Washburn in 1989. He spent 11 years assisting on the Men’s basketball team before being appointed as head coach of the Women’s team in 2000.

With nearly twice as many wins as losses in the NCAA tournament, Coach McHenry has quite a few accolades to his name. Nine different players have been named All-Americans under his coaching, he has four MIAA Coach of the Year awards and has won eight MIAA titles. He also coached the 2005-2006 team to an undefeated 27-0 record. The winning streak in that time period is an even more massive 51 games reaching back to the previous season.

When asked about his success, McHenry gives credit to those around him.

“It’s taken a lot of great players,” McHenry said. “Anyone who says they’ve done this because they know more than somebody else is lying, you know? It’s been a lot of good assistant coaches running the program from the backside in. I’m just the one who gets the record. I’m not anything special.”

However, a little more digging rewards a shred of insight into his method.

“If there’s one thing I try to teach [the players], it’s how to compete,” McHenry said. “You hope that carries onto the next part of their life. This basketball is just a small part of it. That’s the one thing I’ve tried to focus on: how to compete.”

McHenry’s current record stands at 400-113, which to him is just a product of hard work.

“I think a lot of coaches are so concerned about the next game that they are almost surprised when somebody tells you what your number is,” McHenry said. “That’s kind of how I was. I knew we won a lot of games over the years, but I never really checked the record books. We’re always trying to win that next game. That’s kind of how the 400 went.”