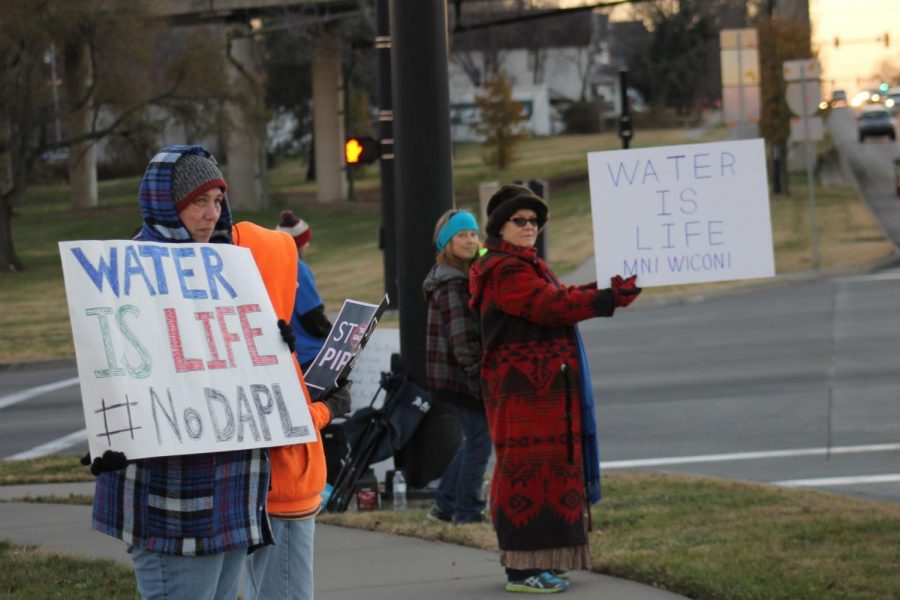 The protest at Topeka Boulevard is part of larger grassroots movement organizing on social media called “Occupy The White House – No DAPL.” It includes chapters in Topeka, Kansas City, Lawrence and Wichita. Joe Cheray, local Topeka resident, organized the protest despite news Dec. 4 that the U.S. Army Corps of Engineers denied the permit necessary for Energy Transfer Partners to complete the final section of the pipeline near Standing Rock.

With the hiatus, the Army Corps plans to do an environmental assessment and offer reroute options, which could take up to six months or more. Energy Transfer Partners maintains that they will proceed with the pipeline as planned as they face the loss of lucrative contracts if oil is not flowing by Jan. 1, 2017.

Hence, local residents, such as Darrell Doty, who felt called to travel to Standing Rock in October, wanted to express his support for the water protectors continuing to stand on the front lines in peaceful prayer. Alex Liberato, 17 year-old Topeka resident, whose family is Navajo, came to the event to stand in solidarity with his grandfather currently at Standing Rock. Alex plans to travel to Standing Rock later this month. Jason and Jennifer Fultz, cannot make a trip to Standing Rock, so they joined the local protest to make their contribution and raise awareness about Energy Transfer Partner’s insistence to continue the pipeline.

The common force uniting all allies are the Lakota words “Mni Wiconi,” meaning “water is life,” and water protectors have vowed to continue to stand against DAPL. As Cheray noted, the purpose of the Monday evening gathering was to “keep pushing peaceful means to keep the pipeline from proceeding” and to “continue with the peaceful spirit of the camps” at Standing Rock.