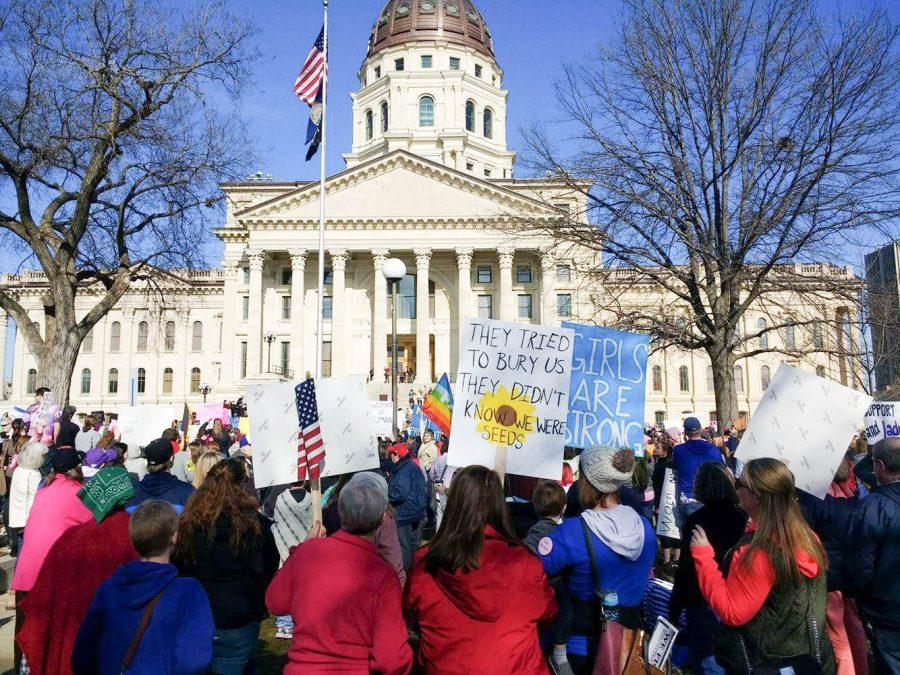 Thousands of protestors gather at Topeka's Capital building for the women's march.

People gathered all over the country to rally for many causes including women’s rights, a single day after the President Trump’s 45th presidential inauguration.

The rally and march at the Kansas State Capitol mirrored protests in Washington D.C. and other state capitals. Attendees were encouraged to bring donations of unopened menstrual products to redistribute in the community.

“This isn’t about the past or even about Trump,” said Macia Law, a retired professor. “This is about the future.”

Even though the protests were organized in direct response to President Trump and his litigation, the speakers hardly spoke of him. Most of the speakers spoke instead of tolerance and unity as a group.

It is always nice to see that there are people who stand with us, even if they don’t share our exact beliefs,” said Sandy Kramer, a fundraiser.

Several volunteers at the march provided general information and promoted various fundraisers and activist projects. One such group was the Women’s March on Washington Archives Project. The project seeks to document the Women’s March via oral histories. This way the march could be documented by women that were present in their own words.

If you were present at the women’s march and wish to tell your story, you can get more information by contacting [email protected]

“I was in Oregon burning bras, but this feels like a deeper movement,” Kramer said.

Another organized action handing out flyers was the Resist Trumps Cabinet Postcard Bombing. The effort focuses on sending as many postcards as possible to our senators to tell them we do not approve of President Trump’s cabinet choices.

“There are people here with signs for gay rights, trans rights, black lives matter and science is cool,” said Mary Chapman, a retired educator. “This just enforces my belief in people who didn’t vote for Trump.”

The Skirts, a local band, led everyone in song before the speakers officially began the rally. Afterwards, several speakers talked about different aspects of being a woman or even human. The rally was about women, but there were speakers who spoke of intersectionalities, the overlap of social identities. Even if someone is a woman, they are always more than that.

One of the speakers, Stephanie Mott, who is employed at Valeo Behavioral Healthcare, talked about trans rights. Mott spoke of how taking rights from one group directly affects others and how we should be strong together. Mott also spoke of plans to open the house next to the Equality House as a safe space for everyone.

“I’m here to make sure we don’t move backwards,” Law said. “I want the world to be a better place for my children and grandchildren.”