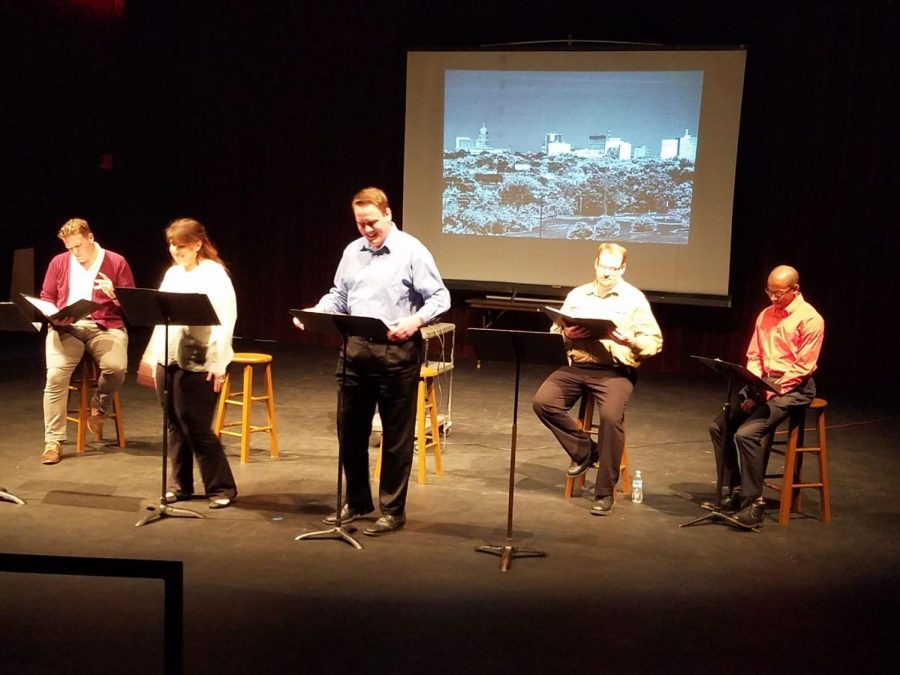 Worldwide: Marcia Cebulska's play "Visions of Right" has been featured all over the United States in many different venues. Many of Cebulska's other plays have been featured internationally with a high school in Turkmenistan performing a play that Cebulska made available on the public domain.

Local playwright Marcia Cebulska was highlighted in the Ad Astra Theater Ensemble’s recent production of “Visions of Right.” The play was performed on the evening of Jan 26 at the Andrew J and Georgia Neese Gray Theater to a large audience of students, faculty members and other community members interested in the play’s message.

The play tells the story of Christina Romanek (Jessica Hope), a photographer whose avant-garde style was picking up steam in New York before a tragedy found her running back to her hometown of Topeka. There she opens up a new gallery, but is smeared by the Reverend Noah Jones (Scott L. Kickhaffer) whose fundamentalist views and rhetoric directly oppose her. Christina continues to run from her problems and Jones before finally learning that the only way to heal is to confront her tormentor.

“Visions of Right” is heavily inspired by the Westboro Baptist Church and its activity in Topeka and nationwide. Noah Jones’ rhetoric and penchant for protesting local art installations with homophobic, anti-Semitic and extremist signs directly parallels the activity of the WBC. Cebulska’s motivations in writing the play were to encourage people to fight back against hatred and to use art to help the world grow.

“Today, our headlines are filled with more and more incidents of hate speech. We can respond by answering violence with more violence or, we can respond with a little help from our friends, with acts of creativity and humor, unity and light.”

The director of the performance, Darren Canady, specifically said that he finds the events of the 2016 election have a profound level of impact on his interpretation of the show. “I don’t think that [the 2016 election] fundamentally changed who these characters were. I think it reminded me that the artists always go first.”

The theme of using art to fight against hatred is very noticeable in the play. Not only is the play created with the intention of fighting back against the loud opinions of the Westboro Baptist Church, but its resurrection has found it also communicating to people the need to go out and make a difference.

Cebulska herself continually urged people to go out and make art, “I urge you to go out and create the world you want to live in,” she said.

The play finds Romanek creating her own world using her skills as a photographer. When she finally confronts Jones, she realizes that his bombastic attitude and penchant for performance art is based around his own narcissism. He urges her to take photos of him and, during this, she realizes that Jones is not some disgusting villain, but that he’s a deeply flawed human just like her. The photos she takes of Jones are used for a very special gallery in New York. One that pairs his photos and his signs with same-sex couples unabashedly kissing.

As the play ends, images of the hateful signs of the WBC pass by images of couples passionately in love.

Cebulska’s work has traveled all over the country and occasionally the world. The Washburn Theatre’s next production is “The Vagina Monologues” which will start at 7:30 p.m. and run from Feb 2-4. All proceeds for the show will benefit STARS to help stop human trafficking.