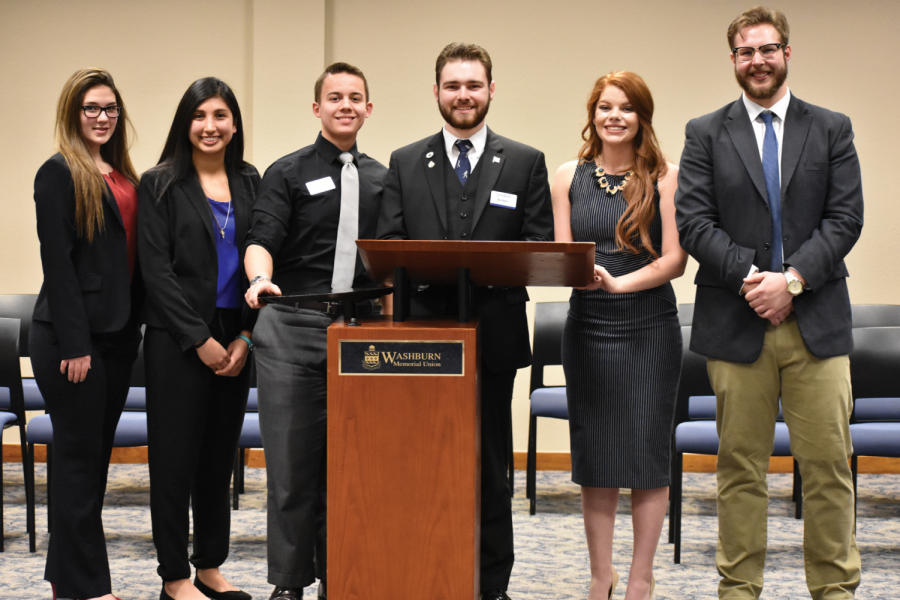 The candidates for the Washburn Student Government Association’s President and Vice President formally announced their campaigns for the chairs at the Feb. 15 WSGA Full Senate Meeting in the Kansas Room.

The parties of Zac Surritt and Jim Henry; Victoria Toothaker and Sarah Arriaga; and Alexis Simmons and Scott Weinkauf all took to the senate podium to announce their candidacy for President and Vice President, respectively.

All three running parties said they were excited for the new election season, and commented in particular on the full house of students who came to the meeting to observe the announcements.

“It was so exciting to see so many active students come and get engaged from the very beginning steps,” Simmons said. “I think that’s a good sign for the coming election and hopefully is a predictor of what the elections results will be like as far as overall student turnout.”

“I loved how many people showed up,” Toothaker said. “For senate, we usually don’t have that many people coming, so I was really humbled to see that many.”

The three parties also said they are dedicated to listening to students during their campaigns and beyond.

“I have been shown a couple issues on campus that I’ve taken passionately, and I think that if we are elected then we have a lot of things to fight for and serve students,” Surritt said.

Weinkauf pointed out that his campaign with Simmons wanted to represent students and explore additional possibilities for interaction between Washburn and surrounding businesses in Topeka.

“We really want to not only invest in our campus, but the community around us too.” Weinkauf said. “We’re going to be reaching out to a lot of businesses and local areas. It’s kind of big picture.”

On issues, Toothaker and Arriaga touched on wanting to re-energize campus involvement.

“We definitely want to work with a ton of different organizations to get a more united Washburn,” Toothaker said. “We’re hoping that organizations can start pairing up together, kind of like Campus Activities Board and Hispanic American Leadership Organization have done in the past, and that way students can be involved in several organizations.”

One issue Surritt and Henry touched on in particular was the new concealed carry policy that will bring guns on campus.

“We want to make sure that we talk with students [and] talk to administration about the new concealed carry policy, something that no administration has had to deal with at this level,” Surritt said.

Simmons and Weinkauf mentioned sexual assault as one of the issues they’re tackling, with proposals .

“Due to the small size of the university, we’re a school built on relationships,” Simmons said. “That’s one of the best ways to combat health issues on college campuses, and that also helps to tie into another issue we want to address: sexual assault.”

For platform slogans, Surritt and Henry have adopted “Communicate, Cooperate, and Coordinate.”

“What [we] wanted to do was – simply put – opening the door to communication, being able to cooperate with everyone and having everyone in the discussion, and then coordinating, having a formal process and a specific way of going about how we want to make that change,” Henry said.

Simmons and Weinkauf have adopted “You Matter.”

“A lot of the big issues that we’re touching on are individual and personal to many students,” Simmons said. “Hearing each person’s voice is crucial.”

Toothaker and Arriaga have adopted “Excite, Unite, and Inform.”

“Part of what we expressed in our announcement was we want the students to be involved, we want it to be student-led and spirit-filled,” Arriaga said. “If the students are excited, then they can make a difference and fuel WSGA on what legislation we need to pass.”

Surritt said ultimately, he hopes that the election brings further awareness to what Washburn students are wanting to discuss.

“It’s just about making sure everybody knows the issues, and whoever wins we’ll get to work on resolving those issues,” Surritt said. “We want to make sure that we are the most open and most connected campaign [with] students.”

“I hope that both our campaign and other campaigns reach out and talk to enough students to make sure that they know their voices are heard,” Simmons said. “We’re getting ideas talked about, we’re getting the conversations started.”

Toothaker also voiced confidence in all the campaigns’ desire to listen to students.

“We’re all definitely about WSGA, and we want to make it better for the students here,” Toothaker said.