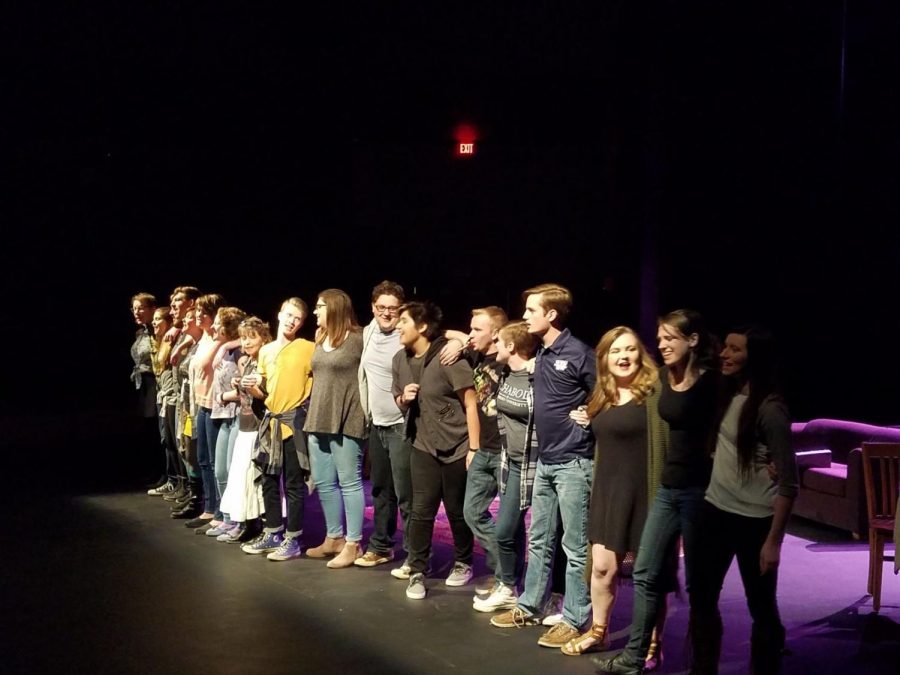 Play us Out: The “WU Words” cast spent an evening regaling stories from dozens of Washburn students. They concluded their performance with a rendition of “Got to Get You Into My Life” by The Beatles, once again promoting the power of unity and friendship.

This past weekend saw the Washburn University Theatre department performing a set of monologues entitled the “WU Words Project.” This project has been at work since early 2016 and has now finally made its way to the Neese Gray Theatre’s stage. Masterminded by Professor Sharon Sullivan, the play aims to show the diversity of Washburn’s campus and the histories of these writers.

“WU Words” is comprised of multiple sets of monologues encompassing a variety of different topics, emotions and opinions. All submissions were made through Sullivan and have been made anonymous both in their written form, which can be found on the Washburn Review website, and the renditions performed on stage this weekend. These stories encapsulate a multitude of different religions, regions, races, fears and mentalities. The play often pairs works with readers that do not match the skin color or religion of the person that wrote the narrative. This captures a unique perspective on the unity of mankind and our similar histories.

“These words are precious because they offer us a glimpse into the individuals that make up our community. They share their histories, passions, fears, challenges, and successes. I am impressed at the resiliency, courage, and strength of our people. I am honored to be entrusted with their stories,” Sullivan said.

The program began with an introduction. “I AM” captures the identity of Washburn and its students. Brief but intensely honest self-portraits of Washburn’s everyday students immediately set the tone of the diversity the play was portraying.

“Potawatomi” highlights the turmoil of Native American people and how it has shaped their identity even to this day. With this story comes a perspective on the importance of preserving culture, especially cultures that in the past have been repressed. The ending lines of the monologues are as follows, “This is how it has always been, for many cultures. The passing of knowledge is how cultures are kept in existence, it is when we start forgetting and failing to practice that cultures are lost.”

The duet “Lightheaded” details the difficulties of having generalized anxiety disorder before reminding listeners that even on bad days happiness is still achievable. Cast members, who were encouraged to react to the performances, met the story with cheerful encouragement as did the audience attending the performance.

Stories like “A Quick Look Into My Life” and “Fantasies of Children” tackled difficult situations of parental abuse while “My Womb” and “Mythic Mother” handled the sadness of personal tragedies such as infertility and the loss of a parent.

Other stories like “The Horrible Misadventures of Tumor Baby,” “Roommate Drama” and “The Lucky One” used very serious life situations to comedic effect. The audience laughed at these moments of humor that balanced out the more melancholy stories.

The play ended with “Beginning Not an End” and “Lessons.” The first is a monologue written by a senior audit student who has attended Washburn for ten years and has taken dozens of classes focused on different subjects. The story concludes with a message for all young students, “The traditional four years of University is only a beginning not an end.” The final piece “Lessons,” regaled all the important advice many students have learned during their time here at Washburn.

All the original writings are available for viewing on the Washburn Review website. The Washburn Theatre Department’s next major work will be Rodgers and Hammerstein’s “A Grand Night for Singing” which premieres at 7:30 p.m. Apr. 20 and will play through the weekend. Its final show will be at 2 p.m. Apr. 23.