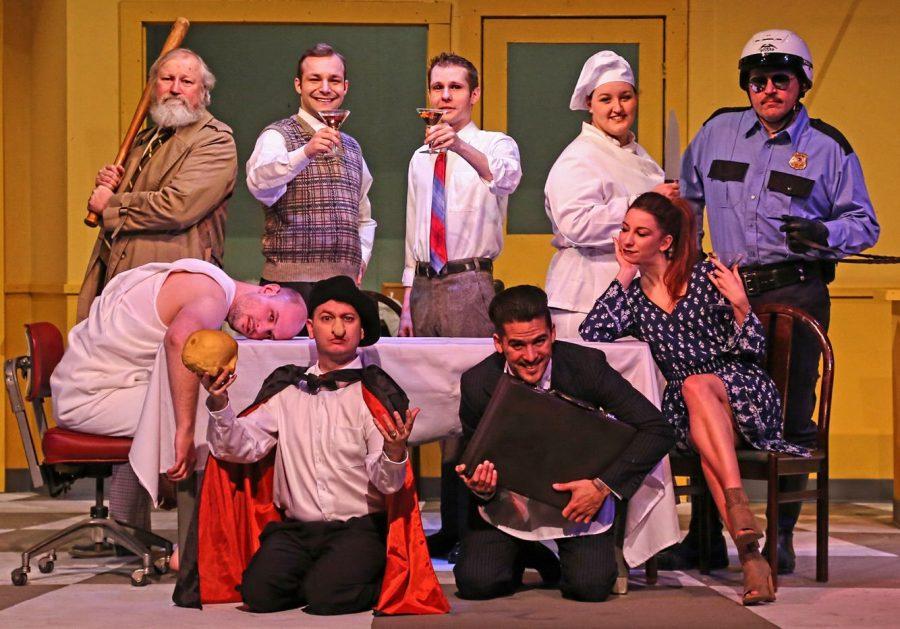 Eccentric Ensemble: The “Flaming Idiots” cast hamming it up post-performance. The play is known for its unique mix of slapstick physical comedy and irreverent stereotypes.

“Flaming Idiots” is Topeka Civic Theatre’s current running production. It coins itself as a “contemporary farce,” which is clear through the play’s use of buffoonery and constant horseplay that the show offers.

The show, written by Tom Rooney, centers around two business partners and former post office workers, Carl (Austen Hanley) and Phil (Matt Briden) who, upon opening a restaurant, realize their customer-flow is not as steady as they were hoping for. Their solution to this problem is to stage a murder in the restaurant, taking inspiration from a rival diner across town that has been crowded since a notorious mobster was shot there years ago.

The story line is a unique one that presents many opportunities for comedy. The biggest laughs from the audience came from the physical comedy that was ever-so-present in the show. Physical comedy is an aspect of acting in the theatre that not everyone can master and deliver with as much expertise as the cast of “Flaming Idiots” did. However not every aspect of the show was received as well as the physical comedy.

While the actors and actresses did a great job of portraying what they were given to work with, the characters that were written into the show seemed far too common and stereotyped. There was not a character present in the show that I felt was unique or that I had never seen before in any other stage production.

While the physical humor left the audience cackling, some of the jokes that were delivered fell flat and some even felt potentially offensive. One of these jokes occurred between Carl and Phil, centering around Bernadette (Alisha Bolz), the deaf head-chef of the restaurant, insinuating that they originally weren’t going to hire her due to her disability and the fact that she was a woman.

The aforementioned stereotyped characters were another source of concern and offense throughout the show. Ernesto (Devan R. Garcia) was a foreigner, posed as “Norwegian,” even though he was clearly of Hispanic descent. An offensive portrayal was Ernesto, a character with a thick accent that was joked about through the entirety of the show, and he was portrayed as the ring-leader of a supposed money-laundering scheme.

Topeka Civic Theatre did a great job with the casting of the roles and with the technical aspects. The show will be playing at 8 p.m. (with an optional dinner add-on) on Fridays and Saturdays through February 11, with Thursday evening showings at 7 p.m. On February 2 and 9, and a 2 p.m. Sunday matinee (with an optional brunch) February 5. Tickets are $25, or $20 for students.