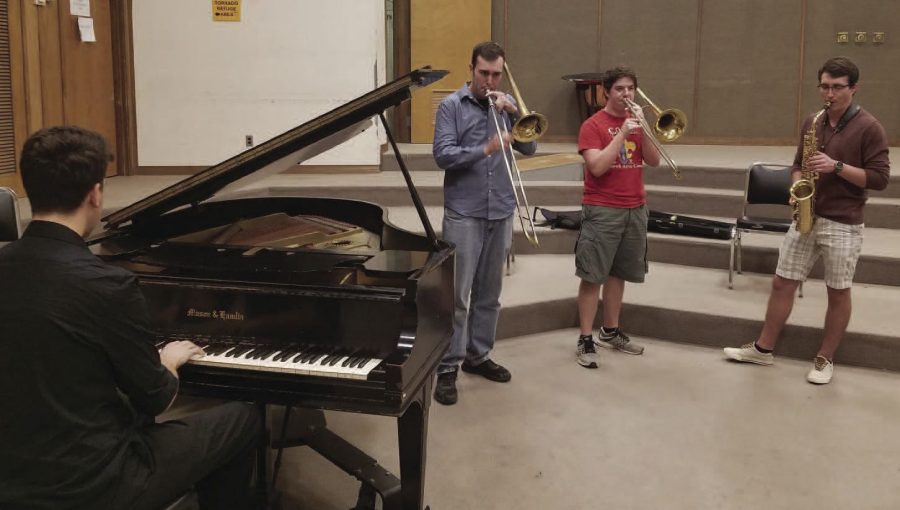 The 785 Big Band only gets to make music together whenever they have a gig. Sometimes they get a chance to jam out together, and when they do, they have fun showing off to each other.

Andrew Anderson graduated from Washburn in the spring semester of 2016 and immediately began work on forming a band that could perform outside of school.

Gathering former classmates, Anderson created the 785 Big Band, a coalition of Washburn students and professional musicians in the Topeka community who could learn from each other and perform in venues in the surrounding area.

“I performed in a big band setting during my sophomore year,” Anderson said. “It completely changed the way I think about music. It challenged me and when I got to the level I was craving and heard how good the music was I knew we had to have something like that in Topeka.”

These early days of the forming of the big band were tough.

Cale Paquette, a senior music performance and education major who plays alto saxophone in the 785 Big Band said of the band’s early months, “We didn’t have many people show up to those first few rehearsals. Then people started to become more interested and now we have 16 guys.”

Anderson also struggled in those first few months. “As a student you just have to play. School never teaches you about booking gigs and making connections and trying to be social with owners of possible venues.” The paperwork was also difficult for Anderson. Often he found himself spending hours copying large swathes of music. “60 songs for 16 to 18 musicians,” Anderson said. “That’s a lot of music to copy and hand out to people.”

“There also aren’t many places in Topeka that want to hire a big band,” said Paul Priddy, a junior music performance major. “There’s a lot more jazz in Kansas City than here but the places that do let us play make for fantastic experiences.”

The young men spoke positively of the people who attend their concerts, citing that when you play in a big band the people attending are going to be the kind of people who really love your sound.

“Another issue is funding,” Paquette stated. “Places are less lenient to accept you if they have to pay for a band made of 16 people. Sometimes we have to be willing to do gigs for free or just for the music.” The young men said they have trouble being a part of an aspiring band as they watch veteran musicians from Kansas City sweep possible venues out from under them.

One of the best parts of playing in the 785 Big Band for the young men is being able to play with people who aren’t students and have mastered their craft. “It’s really cool knowing there are people out there who play so well and are just living here in Topeka without knowing they play as good as they do,” Priddy said.

Daniel Xidis, the group’s third trombone and a freshman music education major, said, “When we’re in school ensembles the only performances we get to do are in concert settings, so it offers a unique opportunity and different venues. Plus, you get to play with people who didn’t pay money to be in a class or feel forced to be there. You play with people who have made the choice to make music together. It’s such a great and dynamic environment.”

The students are also thankful for all the group has taught them.

“Through my time with the band I know how to play with style,” Paquette said. “If your school band is the only place you’re getting exposure then you’re not experiencing what it actually means to play jazz.”

Priddy said that getting out of the classroom and playing alongside experts really helps him grow as a musician, “These people have experience. It’s good to learn in the classroom, but to hear someone play who has experience and pick up on what they’re doing is going to teach you a lot.”

Finding your own voice is an integral part of branching out as a musician, but no artist is without their influences.

“As a pianist, I am heavily inspired by Bill Evans and Oscar Peterson,” Priddy said. “Peterson takes old jazz style and puts a new cutting edge spin on it. His work and style is very influential to me.

Paquette finds inspiration in the tenor saxophonist Dexter Gordon, a virtuoso in the jazz world who helped develop bebop sounds for the saxophone. “Listening to his early work really excited me about music and saxophone. These days I also listen to a lot of Chris Potter and Pat Metheny who is a jazz guitarist.”

All three of the men find inspiration in the Stan Kenton Big Band. “The band’s trombonist Dick Shearer has stupid good sound; I really hope I can sound like that someday,” Xidis said.

Paquette talked about how learning the craft has immensely grown his love of the genre. “You always hear the best of the best and so you don’t realize how difficult it truly is until you work it and once you see the complexity your love of the music is impacted by that.”

Playing jazz allows the young men to experiment and escape the conventions of classical music and helps them find a new voice to speak with through their music. Practicing and playing outside of the school gives them a new insight about the difficulties of being a musician, and lets them learn more from experts outside of the classroom who have mastered their craft.